Bissett named Employee of the Year

Catriona ‘Catch’ Bissett of Nick Alexander’s Kinneston Stables expressed her shock and delight at being crowned Employee of the Year at the 2019 Godolphin Stud and Stable Staff Awards, held at the Jumeirah Carlton Tower Hotel in London on Monday evening.

Bissett had earlier been named the winner of the Leadership Award during the ceremony in Knightsbridge and collected a cheque of £30,000 – £15,000 of which will be shared among the staff at Kinneston Stables for landing the event’s big prize.

Catch is a hugely deserving winner

Having completed the BHA Graduate Scheme in 2011, Catch began working for Alexander in 2014 before being promoted to assistant trainer.

Bissett said: “It was a real shock and a real honour being named Employee of the Year. I spent Monday with my peers who I respect, and everyone here deserves this; the industry is filled with so many people who work very hard.”

Brough Scott, Chairman of the judging panel, added: “The panel’s job was tougher than it has ever been this year with some extraordinary displays of stories of dedication, commitment and hard work amongst this year’s finalists.

“However, we had to reach a final decision and Catch is a hugely deserving winner for all the work she has done in developing and mentoring other members of the team at Kinneston.”

Reflecting on also taking home the Leadership Award, Bissett added: “Winning the Leadership Award was fantastic but it’s a real reflection on the team and every day is a joy with them. I work with driven men and women who I respect and have fun with.

‘You do it because you love the horse, and the team that you work with is integral to how you progress and how you push forward’@godolphin #StudAndStableStaff Employee of the Year winner @CatchBissett after receiving her award last night.#HorseComesFirst pic.twitter.com/8sBrKrTXvj

“It’s really good to work with people who love horses, and all pull together in the same direction.

“My boss said if you want to work with horses, the racing industry is by far the most rewarding place you can do it and I whole heartedly agree with that and pass it on to people.”

Cheveley Park Stud’s Andrew Snell was recognised with the Stud Staff Award, the Dedication to Racing Award went to Jon Bottomley from Ollie Pears’ Yard, and Andrea O’Keeffe was honoured with the Rory MacDonald Community Award for developing many training programmes in place across the industry.

Nick Rust, Chief Executive of the BHA, said: “For Catch to be named Employee of the Year when our sport employs 6,000 people who work so hard to provide first-class care to our horses is a fantastic achievement.

“We are grateful to all the staff who work day in day out to ensure that the horses who take part in British racing are provided with a level of care and quality of life that is virtually unsurpassed by any other domesticated animal.

“These awards are our opportunity to say thank you to all of them, on behalf of the sport and on behalf of our horses, and tonight’s winners and finalists are fitting ambassadors for their profession.” 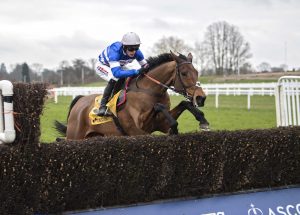