Son of Val Royal was owned by Phil Cunningham

Batsford Stud stallion Cockney Rebel, winner of the 2007 English and Irish 2,000 Guineas, died at the age of 17 on Tuesday.

His owner Phil Cunningham posted the news on Twitter and said: “It is with great sadness that I advise the death of Cockney Rebel this afternoon. He gave myself, my family and all those connected with him such great memories that I could only have ever dreamed of. The horse of a lifetime, you changed my life #RIPCockney.”

A 15,000gns foal at the 2004 Tattersalls November Sale when purchased by Trickledown Stud from breeders Oak Lodge Bloodstock, Cockney Rebel was offered at auction a year later at the Doncaster St Leger Sale where he was bought by Bobby O’Ryan for 30,000gns.

Entering the care of Geoff Huffer, Cockney Rebel won as a two-year-old as well as placing third behind Vital Equine in the Group 2 Champagne Stakes at York.

At three, Cockney Rebel renewed his rivalry with Vital Equine and this time came out on top by one and a half lengths to land the 2,000 Guineas in 2007. He followed up that success with a length win over Creachadoir to claim the Irish 2,000 Guineas.

Cockney Rebel began his stallion career at the National Stud in 2008 at an opening fee of £10,000. After several seasons, he moved to Haras de Saint Arnoult in 2014 and in 2016 he transferred to Haras du Thenney.

In 2018, Cunningham revealed he had full ownership of his dual Group 1 star and the son of Val Royal would stand at Batsford Stud in Gloucestershire from the 2019 breeding season onwards.

Cockney Rebel is best known as the sire of stakes performers Redstart and Monette and has also produced a number of National Hunt winners including Cockney Sparrow, winner of the Grade 2 Scottish Champion Hurdle. 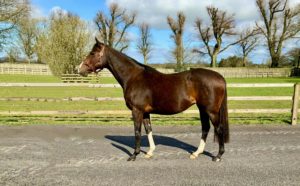 Up Next
We Are Ninety heads Tattersalls Online March Sale