The world’s highest-rated racehorse, Arrogate, completed his first piece of work at Meydan Racecourse on Monday in preparation for his run in the Dubai World Cup this weekend.

The four-year-old, who is the reigning Breeders’ Cup Classic hero, breezed 800m around the Meydan tapeta under regular work rider Dana Barnes just before dawn.

His trainer, Bob Baffert, has won what was formerly the world’s richest horse race two times before when the race was run at Nad Al Sheba.

He won it with Silver Charm in 1998 and with Captain Steve three years later.

Baffert said: “He’s handling everything really well. He looks good to me.

“I’ve never won it here [at Meydan], and it’s totally different. I really liked that old track [Nad Al Sheba], but this is totally different tighter turns. You need a lot of racing luck to get away from the gate. It becomes a jockey’s race.”

A son of Unbridled’s Song, Arrogate increased his prize money earnings to a staggering £8.4 million after striding to a four length success in the inaugural running of the Pegasus World Cup Invitational in January.

That day he was beating California Chrome for a second time under the Breeders’ Cup all-time leading rider Mike Smith.

California Chrome himself ran out an easy three and a half length winner of Meydan’s showpiece just under 12 months ago.

The Juddmonte-owned superstar will face 13 rivals in this year’s edition of the $30 million contest over a mile and a quarter. They include stable mate Hoppertunity who finished a staying on third in the race last year.

One place in front of him was the Mike De Kock-trained Mubtaahij who also returns for another tilt after finishing second in his prep race over the course and distance just under a month ago.

Saeed Bin Suroor, who has won the race a record seven times with the likes of Dubai Millenium and Street Cry, will field outsider Move Up on Saturday. He was the winner of the Group 3 Cumberland Lodge Stakes at Ascot back in October.

Arrogate is currently a best price of 1/3 with Mubtaahij next best at 8/1. 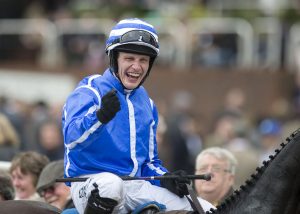 Up Next
Gift strikes for red-hot Townend