The Willie Mullins-trained Douvan has been announced as the highest-rated jumps horse of last season following the Anglo-Irish Classifications press conference in London.

Only a pound behind the previous year’s leading two-mile chaser Sprinter Sacre, Douvan’s rating was said to have been achieved at Leopardstown’s Lexus meeting over Christmas.

That day he beat none other than subsequent Cheltenham Gold Cup winner Sizing John by eight-lengths in the Grade 1 Paddy Power Cashcard Chase.

“Douvan, the previous season’s top novice, improved his rating from 169 to 174 thanks to a scintillating performance at Leopardstown at Christmas where he beat the future Gold Cup winner,” said Phil Smith, Head of Handicapping for the BHA.

“That was Sizing John’s first run of the season and his only defeat and although he clearly improved for stepping up in trip, he is no slouch at 2 miles.”

Elsewhere, the late Many Clouds achieved the highest ranking amongst the three-mile chase division.

The 2015 Grand National victor gallantly fought back to beat Thistlecrack in the Grade 2 Cotswold Chase, before he sadly collapsed and died after the race.

Despite losing his unbeaten record over fences in that contest, Thistlecrack came out in top with a rating of 170 in the three mile novice chase pool.

No doubt his performance in the King George VI Chase on Boxing Day was a standout performance.

Arkle hero Altior was given the same rating as Colin Tizzard’s nine-year-old after a superb season. He rounded it off with a comprehensive beating of Champion Chase winner Special Tiara in the Celebration Chase on the final day at Sandown.

In the hurdling division, the Nicky Henderson-trained Buveur D’Air claimed top plaudits with a 167 rating over two miles.

The panel gave the gelding that figure based on his four-and-a-half-length defeat of stable mate My Tent Or Yours in the Stan James Champion Hurdle back in March.

David Dickinson, fellow BHA Handicapper, said: “The decision to bring Buveur d’Air back from a novice chasing career proved a masterstroke, as his slick jumping of the smaller obstacles saw him run to a perfectly respectable Stan James Champion Hurdle winning figure of 167, a figure he improved on by a couple of pounds over two and a half miles at Aintree, with a more authoritative success over his luckless stable companion My Tent Or Yours.” 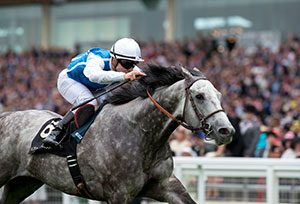 Up Next
Classy grey Solow retired