Altior sealed his place in history at Cheltenham on Wednesday when he equalled Big Buck’s record of 18 consecutive victories with a resilient performance to take the Grade 1 Betway Queen Mother Champion Chase.

Patricia Pugh’s brilliant nine-year-old had to work hard for his triumph, with Sceau Royal and Politologue putting him under pressure at the last, but the sheer class of Nicky Henderson’s stable star shone through to seal the title for a second year in succession.

Henderson has now won the Queen Mother Champion Chase six times, moving him level with the record held by Tom Dreaper – responsible for training six winners of the race from 1960 to 1970.

“Just how lucky are we? We retire Sprinter Sacre and then find another in Altior,” said Henderson.

“You can’t believe it’s possible really and it makes it all worthwhile. He’s some star.

“The people were fantastic this morning when Sprinter Sacre [Champion Chase winner in 2013 and 2016] was paraded and when you see the crowd with Altior today, it does take you back to those days.

“It’s lovely when people do take themselves to horses.”

Asked what he thought when Sceau Royal jumped alongside his superstar, Henderson added: “Hells bells, we’ve got trouble here! Altior just picked up and he knew what he had to do.

Altior receives a hero’s welcome after returning to the winner’s enclosure after victory in the Grade 1 Betway Champion Chase #CheltenhamFestival pic.twitter.com/smQwCtQAqY

“We knew there wasn’t much pace and Nico was worried that even Saint Calvados wasn’t going to make it up front.

“Over the summer we’ll sit down and think about the King George VI Chase [over three miles]. We will seriously think about it next season.

“It’s nice to get the record but you wake up in the middle of the night and think about Winx and realise this is insignificant.”

Altior’s jockey, Nico de Boinville, added: “We definitely went half a length down after the last, but he just seemed to find this extra gear. I don’t know where it comes from – he is just a phenomenal athlete. I think he doesn’t know how to lose at the moment. Long may it continue!

“I was watching how he came in, the crowd that came out to see him, and the cheer he got. I think we are getting to the level of Sprinter Sacre – the public are really warming to him and I think he lit up the Festival this year.

“I don’t think that I rode Sprinter Sacre at his peak, but I am riding Altior at his peak and, for me, he is the best I have ridden. I can breathe a sigh of relief now.

“Altior ranks right up there. I am not going take anything away from past champions – who can forget Master Minded coming up that hill and Sprinter Sacre, but what a horse Altior is. We are lucky to be in an age where he is here. I think we should celebrate him.”

Earlier on the card, de Boinville had guided William Henry to a thrilling success in the Grade 3 Coral Cup Handicap Hurdle, delivering the nine-year-old right on the line to deny the veteran Wicklow Brave.

The diminutive Tiger Roll was the toast of many at the course on Wednesday when he sauntered to a 22-length victory to land back-to-back editions of the Glenfarclas Cross Country Chase.

That took the nine-year-old’s tally of victories at the Festival to four, having won the Triumph Hurdle in 2014 and the JT McNamara National Hunt Challenge Cup Amateur Riders’ Novices’ Chase in 2017.

His owner, Michael O’Leary, said: “Tiger Roll is a legend around here and for a horse who won the Triumph Hurdle, they certainly don’t seem to come back, let alone win cross-country races.

“It’s a phenomenal training performance from Gordon Elliott because Tiger Roll wasn’t great as a chaser, but he’s transformed him by changing his routine and sending him over the cross-country obstacles.

A phenomenal performance from Tiger Roll to land the Glenfarclas Chase for the second year in a row. That’s his fourth win at The Festival! #CheltenhamFestival pic.twitter.com/CECCHOWTG2

Elliott had more reason to celebrate by the end of Wednesday when Envoi Allen held off the strong challenge of Blue Sari to land the Grade 1 Weatherbys Champion Bumper under Jamie Codd.

It was a second winner of the meeting for Codd and also the gelding’s owner Cheveley Park Stud, who registered a notable first win with A Plus Tard on Tuesday.

Envoi Allen, a son of French-based stallion Muhtathir, was bought by Tom Malone on behalf of Cheveley Park Stud for £400,000 at the Tattersalls Ireland Cheltenham February Sale in 2018.

At Thursday’s Tattersalls Ireland Cheltenham Festival Sale, there is a chance to buy into the family of Envoi Allen through the Grange Stables offered Enjoy D’Allen, who got off the mark at the second time of asking in a five-year-old point-to-point at Tinahely last month.

Mark Walsh made a quick return to the Cheltenham winner’s enclosure on the second day of the Festival after guiding the Martin Brassil-trained City Island to victory in the Grade 1 Ballymore Novices’ Hurdle.

Walsh, who had tasted opening day success on Espoir D’Allen in the Champion Hurdle, has now taken his tally of Cheltenham winners to three, having been successful on Bleu Berry last year.

City Island was one of six horses in contention at the penultimate flight and the Nicky Henderson-trained Champ loomed up as if the race was his to secure. However, City Island battled on to take the lead and Champ had no response. The six-year-old son of Court Cave pulled clear to win by two lengths.

It was a first Cheltenham Festival winner for Brassil, who shot to glory in 2006 when Niall ‘Slippers’ Madden and Numbersixvalverde combined to great effect to win the Grand National.

Brassil said: “It’s been a long time coming, but you need good horses. I wanted to bring the horse here unbeaten and then I thought we might have a chance of doing something good.

Mark Walsh is back in the winner’s enclosure after guiding the Martin Brassil-trained City Island to victory in the Grade 1 Ballymore Novices’ Hurdle on the second day of The Festival #CheltenhamFestival pic.twitter.com/uTvSccAZqm

“He’s a precocious sort of horse compared to some of those big, strong chasing types, and he’d pleased us every time.

“He was improving as he came along, but whether he was good enough to have his first Graded race in this place we didn’t know. It’s great to have a Festival winner on the CV. It’s wonderful.”

City Island’s victory was a notable first for race sponsor Ballymore’s founder and Chief Executive Sean Mulryan, whose wife Bernardine is the registered owner of the horse.

He said: “It’s a dream come true. It’s my first winner at the Festival, and to win our own race is very special. This is a magic place, and to win any race here is fantastic. We are very happy.”

Paul Nicholls has long held Topofthegame in high regard and in the Grade 1 RSA Insurance Novices’ Chase, the gelding rewarded his trainer’s faith with a dominant triumph.

Topofthegame had nearly secured a Grade 1 victory in December when second behind talented mare La Bague Au Roi in the Kauto Star Novices’ Chase but Nicholls felt that his jockey, Harry Cobden, had delivered him too soon.

Cobden was a picture of perfection on Topofthegame. Faced with a wall of horses, he waited for a gap to open up and when it did, Topofthegame scythed through it to go up alongside Santini.

It was left to those two to fight out the finish and when Santini rallied, Cobden and Topofthegame found more to win by half a length.

A first winner of The Festival for duo Paul Nicholls and Harry Cobden with Topofthegame, an impressive victor of the Grade 1 RSA Insurance Novices’ Chase #CheltenhamFestival pic.twitter.com/Qe5onA578K

Nicholls said: “Topofthegame is a very smart horse. He has not been the easiest to train but, on his day, he is good. I haven’t said too much to Harry about how to ride him – I left it to him and just told him to take his time whatever he does – and he gave the horse an absolutely brilliant ride.

“For Paul Barber and Chris Giles, today was the only day that we trained him for. The next target will be the Gold Cup next year. Like Clan and those other young horses that we have got, it’s really exciting to have them, but Rome wasn’t built in a day and we have to let them develop quietly

“He is not unlike Denman. We’re really excited to have him. He is rated pretty much the same as Denman was at this stage of his career. Denman was a grinder and this horse has plenty of boot. He travels well and jumps well – he is only going to get better.”

Band Of Outlaws strikes for O’Brien

Joseph O’Brien was handed his first official victory at the Cheltenham Festival on Tuesday when Band Of Outlaws justified favouritism to come home a ready winner of the Grade 3 Boodles Juvenile Handicap Hurdle.

O’Brien had helped to train 2016 Triumph Hurdle winner Ivanovich Gorbatov, who was owned by JP McManus, but his official trainer was listed as father Aidan O’Brien. 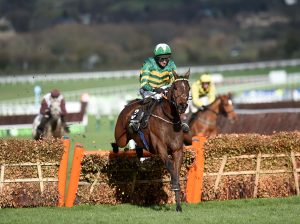 Up Next
Espoir D'Allen delivers for McManus