Connections of The Right Man, which include former France-Galop General Manager Thierry Delegue, are eyeing up a tilt at Royal Ascot

The winner of this year’s Group 1 Al Quoz Sprint on Dubai World Cup night, The Right Man, will fulfill a life-long dream for his owners as he prepares to line up in the Diamond Jubilee Stakes at Royal Ascot next month.

A British-bred son of Lope De Vega, the five-year-old is part-owned by 60-year-old Thierry Delegue, familiar in French racing circles as former General Manager of the sport’s governing body, France-Galop.

Delegue manages the gelding under the banner of his and his wife’s company Pegase Bloodstock.

The remaining three-quarters of the sprinter belong to three North African friends of Delegue’s – Zied Ben M’Rad, Azaddine Sedrati and Samira Turki – while the remaining 10% belongs to Comte Guillame de Saint-Seine, a board member of France-Galop.

Sainte-Seine has teamed up with Delegue in the past with success. Their juvenile Penny’s Picnic was a Group 2 winner and now stands at Haras du Hoguenet.

“I’m always prepared to look a long way back on the female side of the pedigree when going through the sales catalogue, and both Penny’s Picnic and The Right Man had exceptional third dams,” said Delegue.

Trained by Didier Guillemin, The Right Man has progressed slowly after being somewhat of a disappointment in his early days, losing three of his four juvenile starts in provincial races.

However, he was found to have a small bone chip in his knee, which was surgically removed. At the same time he was gelded as he was proving rather sturdy and flighty.

After bombing out over a mile, the switch to sprinting has reaped dividends, with eight wins from 13 outings, each time ridden by Francois-Xavier Bertras.

His crowning moment in the £487,000 Al Quoz Sprint was the culmination of a long-term plan.

I knew that it was the race for us

“As soon as the Dubai World Cup Carnival race conditions came out, and I saw that the race was going to be run over six furlongs for the first time, I knew that it was the race for us,” said Delegue.

“The Right Man was out in Dubai for over five weeks and ran well there in his prep race, but, contrary to what I read in some papers, he wants good ground – when he won a Group 3 last November it wasn’t really that soft for the time of year.

“I want him to have only five or six races this year, so we’ll send him straight to the Diamond Jubilee and then take it from there.” 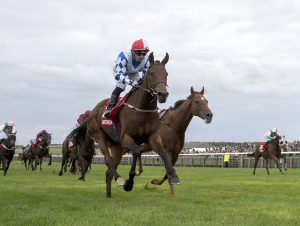 Up Next
Sagaro success for improving Selection