Nurturing the stars of tomorrow
News

“Al Dancer my best chance of the week”

Anticipation is building with the Cheltenham Festival less than two weeks away and with the course basking in unusually glorious sunshine for February, trainers and key officials gathered at the track on Wednesday for a press conference ahead of the four-day spectacular.

Among the trainers discussing the prospects of their leading hopes was Gold Cup-winning trainer Nigel Twiston-Davies, who counts his exciting Grade 3 Betfair Hurdle winner Al Dancer as part of his Cheltenham team.

The flashy grey is favourite for the Grade 1 Sky Bet Supreme Novices’ Hurdle on the opening day of the meeting and Twiston-Davies said: “He’s come out of the race really well and he won nicely there.

“The race at Ascot didn’t take too much out of him at all and he’s a very exciting horse and the softer the ground he gets the better.

“He is as good a two-mile novice hurdler as I’ve trained and while he ran quite free at Ascot, we’re thinking that a true-run, two-mile race at Cheltenham will really help him settle, so he should be even better.

“He’s our best chance of the week and if he wins, I could go home happy.”

Nigel Twiston-Davies is talking through his intended runners at the Cheltenham Festival.

Betfair Hurdle winner Al Dancer has come out of that race really well and is the trainer’s “best chance of the week” at the four-day meeting #CheltenhamFestival pic.twitter.com/mi5Y4Vc8el

Multiple Grade 1 winner Bristol De Mai is also Cheltenham-bound and the eight-year-old will take his chance in the Gold Cup, hoping to finish closer then when a well-beaten seventh in 2017.

Twiston-Davies added: “I’m very happy with Bristol De Mai and the plan is to run in the Gold Cup. He is certainly overpriced and is the equally top-rated long-distance chaser in the country.

“He has beaten a lot of the fancied runners in the Betfair Chase earlier this season and hopefully he can do it again.”

Other hopefuls for Twiston-Davies include Ballyandy, who will contest the Coral Cup, Mr Antolini, who heads the weights for the Martin Pipe Conditional Jockeys’ Handicap Hurdle, and Wholestone, who will run in the Sun Racing Stayers’ Hurdle.

Ben Pauling is no stranger to success at the Festival, having trained the ill-fated Willoughby Court to win the Neptune Management Novices’ Hurdle in 2017, and the Bourton-on-the-Water-based trainer has a quality team of five horses to run this year.

Pauling said: “Le Breuil never travelled last year. He’s produced some good performances this year and is man enough for it with his jumping. Daryl Jacob wants to ride him.

“At the end of last season, I hoped that Global Citizen would be a horse who we should leave over hurdles this season and target the Champion Hurdle with and it has turned out that way.

“He’s a lively each-way chance for the race; he has electric jumping and the quicker they go the better he’ll be.

“Kildisart will go for the JLT Novices’ Chase. Unfortunately, winning here on Festival Trials Day ruled us out of going for the Close Brothers Novices’ Handicap Chase, which was very much the aim.

Clerk of the course @CheltenhamRaces Simon Claisse provides an update on the ground.

“Ground today is the quick side of good.”

According to the forecast, the racecourse could get between 35-44mm of rain between Saturday and Monday week pic.twitter.com/FchGjbnJB6

“He is improving all the time and I just love his running style. He’s a good jumper and a relaxed traveller.”

Minella Rocco’s long-intended target is this year’s Randox Health Grand National on April 6 but his trainer, Jonjo O’Neill, was on hand at Cheltenham on Wednesday to confirm the nine-year-old will contest the Ultima Handicap Chase before his intended date at Aintree.

O’Neill commented: “All being well he heads for the Ultima and he ran a bit better over hurdles at Exeter last week. I’m hoping he can improve again from that run.”

Of his other runners, O’Neill said: “Sky Pirate will either go for the National Hunt Chase or the Kim Muir. We’ll have to wait and see with him but he ran well the other day at Exeter when he was fourth.

“Cloth Cap will run in the National Hunt Chase. I spoke to Mick Meagher [Trevor Hemmings’ Racing Manager] and that’s the plan. Champagne At Tara will probably go for the Johnny Henderson Grand Annual.” 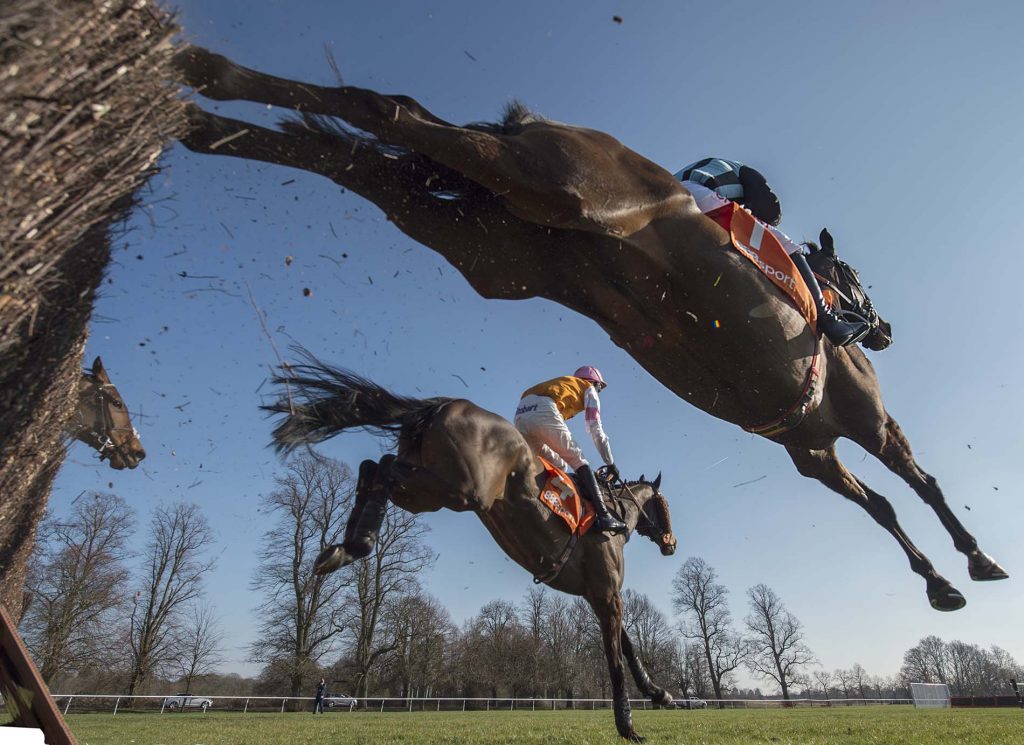 Charlie Longsdon has a number of horses with multiple entries at this year’s Festival but is leaning towards running Castafiore, second to Bags Groove in the Grade 2 Pendil Novices’ Chase on February 23, in the Grade 1 JLT Novices’ Chase to make user of a 7lb allowance for mares.

Longsdon said: “Castafiore has been a revelation for us over fences. She ran a great race at Kempton last weekend on ground that was probably too quick for her. She is as tough as nails and wherever she goes, she will have an each-way chance.

“She is not bred to jump a fence, being the by the same sire [Street Cry] as Winx and Zenyatta, but she loves her jumping and that is her biggest asset.”

Simon Claisse, Clerk of the Course at Cheltenham, provided an update on the ground ahead of the Festival.

He said: “Today the ground is on the quick side of good. The forecast suggests that we could get between 35-40mm of rain between Saturday and Monday week. If the bottom end of that forecasts arrives, we would be looking at good to soft ground.

“If the rain doesn’t arrive, we’ll do whatever to start the Festival on slow ground.”

Up Next
Nurturing the stars of tomorrow