Fakir D’Oudairies justified odds of 10/11 favouritism to make it back-to-back victories for Joseph O’Brien in the Grade 1 Marsh Chase at Aintree on Friday.

Hitman looked to have his measure as he loomed up alongside heading towards the last but jockey Mark Walsh still had a bit up his sleeve on Fakir D’Oudairies and having asked his partner for everything, was rewarded with a finishing burst that took them almost six lengths clear.

Hitman held on for second, three lengths ahead of Sceau Royal in third.

“When he’s buzzy beforehand, he’s in really good form – I was delighted to see him like that,” Walsh told ITV Racing. “He was brilliant today, he jumped and travelled well and only missed one.  And that’s down to Joseph. He kept him away from Cheltenham, and today he was a fresh horse.”

Fakir d’Oudairies, who formed the second leg of a Grade 1 double for owner J P McManus following the earlier victory of Jonbon in the Betway Top Novices’ Hurdle, was winning his fourth Grade 1 race and for the eighth time overall.

“He turns up every day,” said Joseph O’Brien. “He’s a great horse and Mark gave him a wonderful ride. It’s very special to win here today.

“He’s still quite a young horse, we can mind and campaign him accordingly and have him round for a few years yet.”

Seven-year-old Fakir d’Oudairies shares his sire, Kapgarde, with A Plus Tard and Clan Des Obeaux and was bred in France by Comte Michel De Gigou out of Niagaria Du Bois, a placed daughter of Grand Tresor. 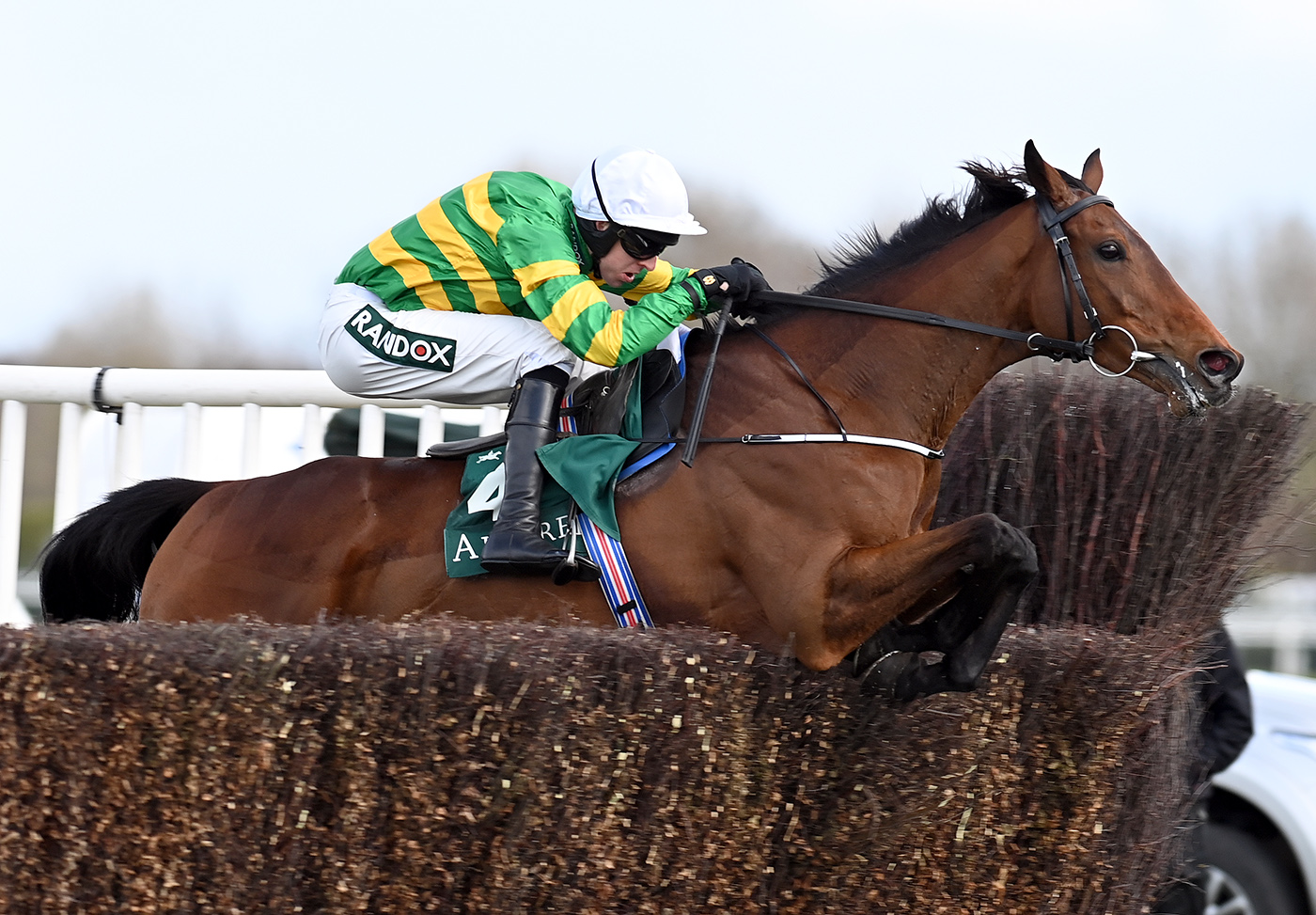 It was smooth sailing for Fakir D’Oudairies in the Marsh Chase. Photo – Bill Selwyn

Ahoy Senor returned to the scene of his victory in last season’s Doom Bar Sefton Novices’ Hurdle to record an emphatic win for Lucinda Russell in the Grade 1 Betway Mildmay Novices’ Chase.

In a race where much of the pre-race focus centred upon Bravemansgame, who lined up off the back of a winning four-race streak, and L’Homme Presse, who had defeated Ahoy Senor when successful in the Brown Advisory Novices’ Chase at last month’s Cheltenham Festival, Ahoy Senor was allowed to go off at 4/1 in the four-runner field.

The result never looked in doubt, however, as allowed to dictate matters from the outset, Ahoy Senor got into a lovely rhythm under Derek Fox and with a series of accurate leaps up the home straight sealing the advantage, went on to bound clear for a five-length win.

Outsider Fury Road ran well in second at 14/1, 13 lengths ahead of L’Homme Presse, who was reported to have run ‘flat’ by jockey Charlie Deutsch. Bravemansgame was a disappointing last of the quartet, having run keen during the early part of the race.

“He’s a serious, classy horse,” Fox told ITV Racing. “I think he’s still learning on the job. I was going to be handy but some days he takes a hold and you have to kind of go with him. He was pretty free early on but he got into a nice rhythm. For whatever reason, this track might just play to his strengths.”

A graduate of the British pointing field, Ahoy Senor was bred in Ireland by D P Constable out of point winner Dara Supreme, by Darazari. He is a son of Arc hero and former Coolmore stallion Dylan Thomas. 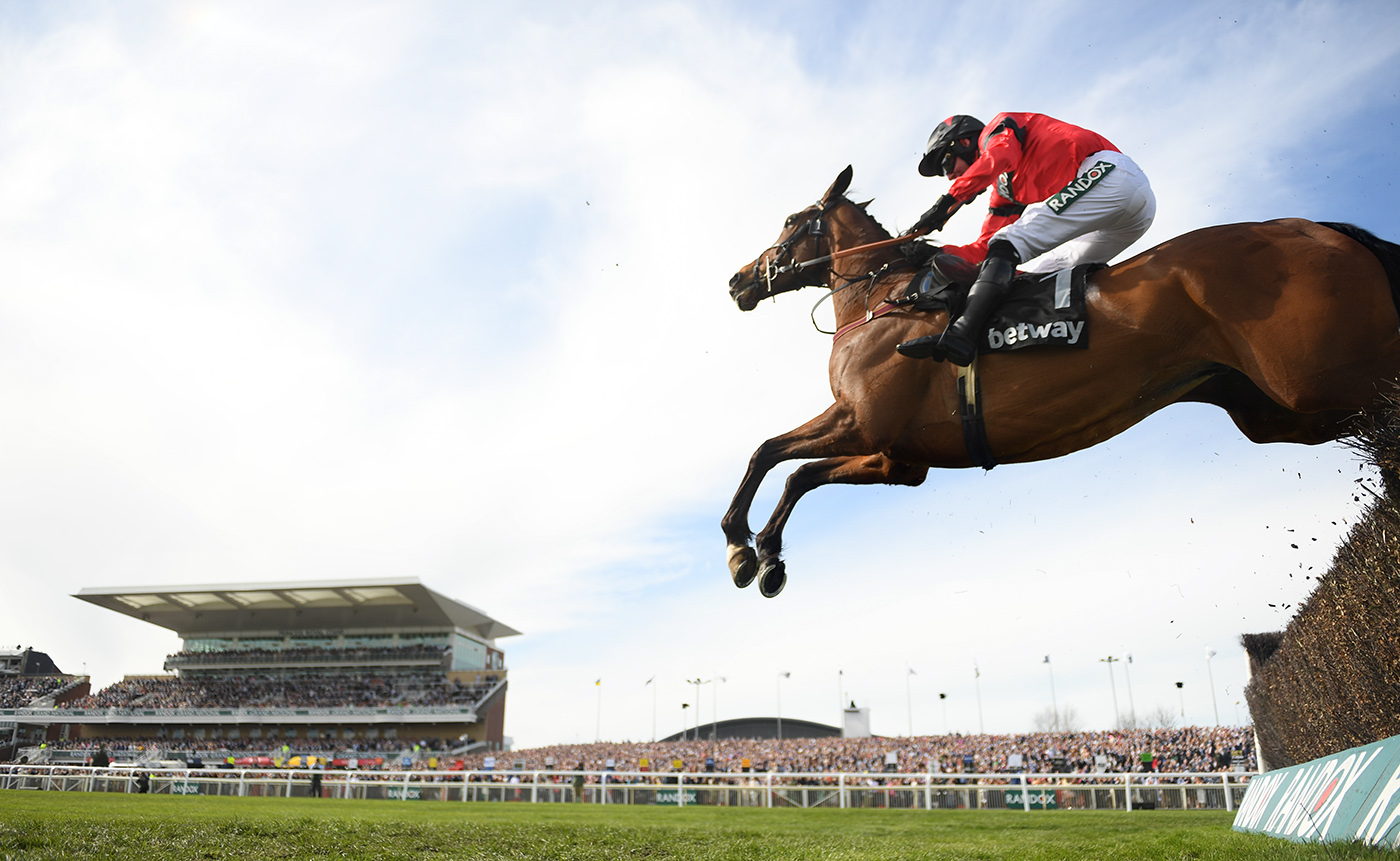 Jonbon showed tremendous grit to come out on top in a thrilling finish to the Grade 1 Betway Top Novices’ Hurdle.

J P McManus’ top novice hurdler, who had endured a hard race when second in the Supreme Novices’ Hurdle at the Cheltenham Festival, cruised into the lead under Aidan Coleman at the penultimate flight and had to dig deep to repel the challenge of El Fabiolo – making only his second start for Willie Mullins – by a neck. Such was the battle between the two that they pulled 19 lengths clear of the third Vino Ardanza.

“The second horse is a fair horse, as we know,” Coleman told ITV Racing. “He got to the front three out, he had a battle and he hasn’t let me down. He’s dug it out when I wanted him, and he’s jumped like his usual self.

“I’ve a real soft spot for him because I’m sick of reading people saying that’s a naughty boy – he’s a gentleman. He’s a free sweater. Anyone can ride this horse. He jumps and he’s a perfect gentleman but he just gets warm.”

The sixth winner of the race for Nicky Henderson, Jonbon becomes the second Grade 1 winner out of Star Face following his celebrated older brother Douvan. The pair are sons of Walk In The Park, who stands under Coolmore banner at Grange Stud. 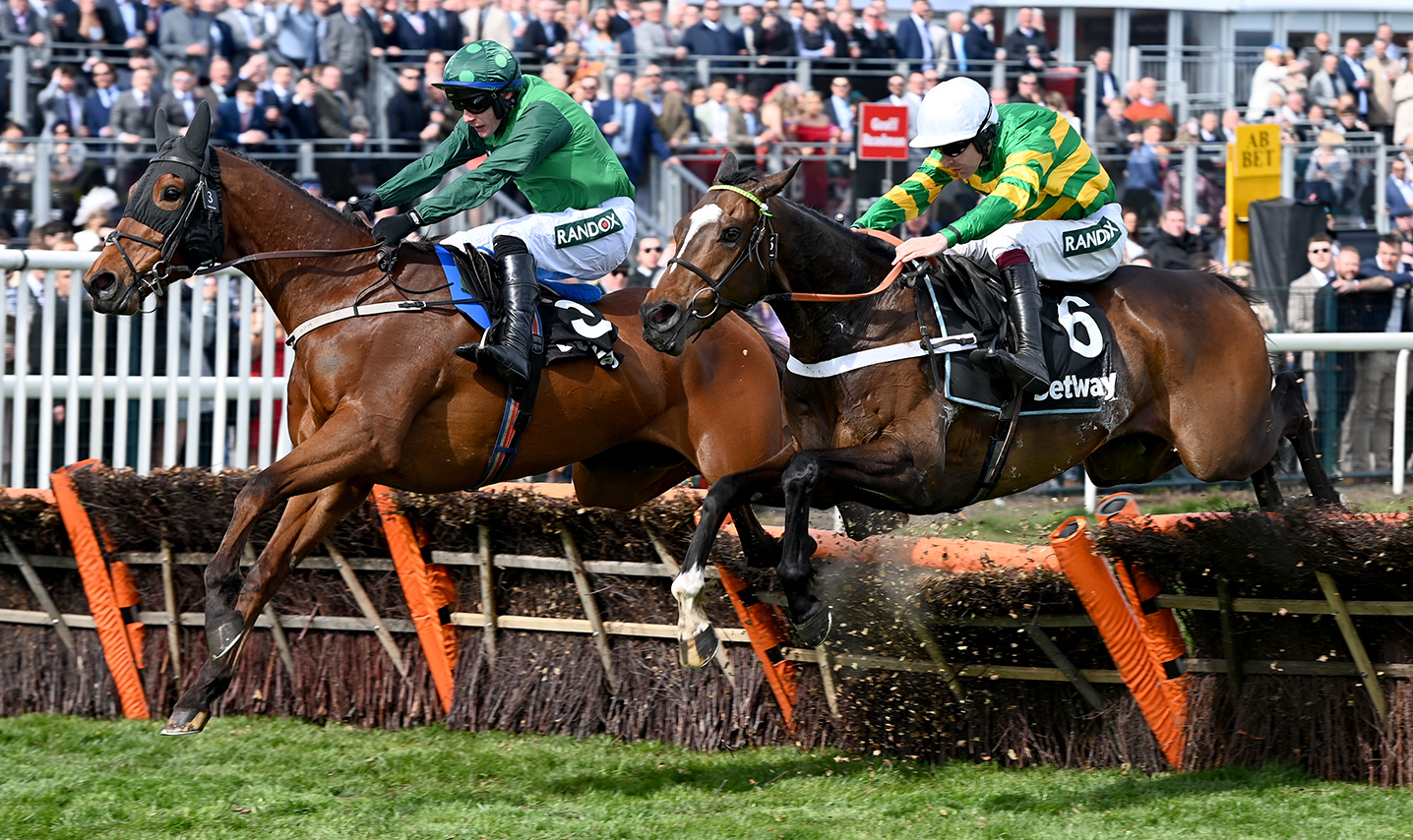 Jonbon (nearside) and El Fabiola battle it out over the last. Photo – Bill Selwyn

The victory of Gelino Bello, meanwhile, in the Grade 1 Cavani Menswear Sefton Novices’ Hurdle helped consolidate Paul Nicholls’ place at the head of the jumps trainers championship, his authoritative success adding a further £56,000 to his handler’s seasonal total.

The Saint Des Saints gelding was hard pressed by 28/1 shot Gentleman At Arms approaching the last but he answered every call of jockey Harry Cobden to gain the upper hand and ultimately pull clear for a near five-length success at 7/2. The 100/1 outsider Haute Estime ran an excellent race in third.

“He was brilliant,” said Cobden of the six-year-old gelding, who had been last seen scoring in a Newbury novice hurdle last month. “He’s got a lazy style of racing. He was always behind the bridle during the first mile and a half but then he locks on and he stays very well. Bravemansgame was a big disappointment but this lad made up for it. I’m delighted.” 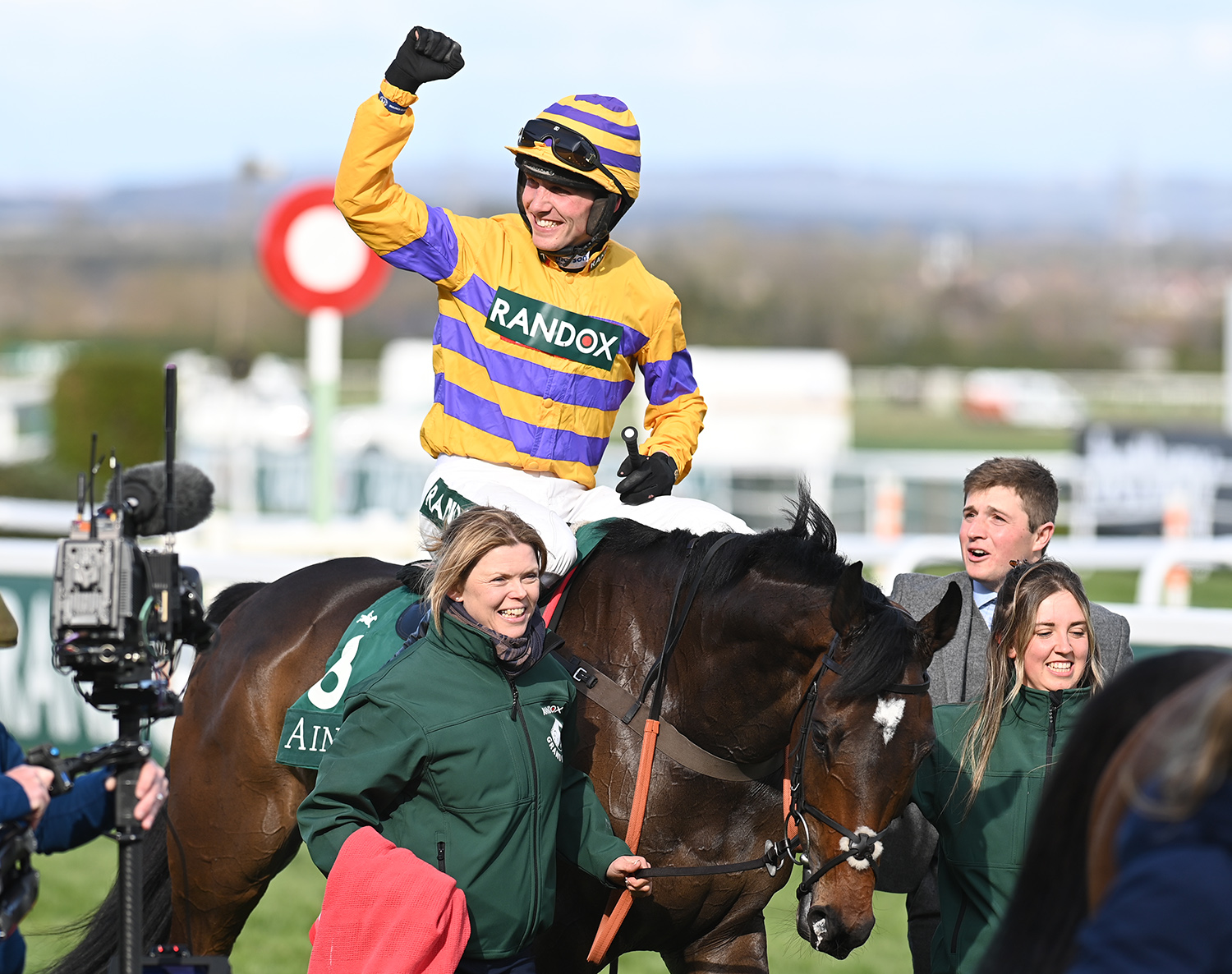 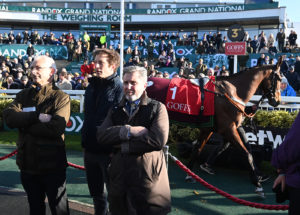 Up Next
Winning pointer heads Goffs UK Aintree Sale at £400,000