Absolutely So strikes for team Balding

The George Smith Family Partnership were left celebrating their first Group 3 winner as their gelding Absolutely So found most to prevail in the Betway John Of Gaunt Stakes.

In rain-softened ground, the eight runners were led by tearaway leader That Is The Spirit in the early stages.

Into the straight, the leader stayed on the far side rail while the remaining seven runners headed down the centre of the track.

Jallota took the main group along and tried to set sail for home inside the final three furlongs.

Deep inside the final furlong, Absolutely So gradually wore away at Jallota’s lead and got up in the final strides to win by half-a-length.

“He’s such a tough character he never knows how to run a bad race,” reflected Probert.

“He’s had his issues in the past and to get him back to his best and win this is a massive team effort.

“The ground probably helped him, we’ve gone a good even gallop throughout and he’s knuckled down well.”

A son of Acclamation, he registers the first Group win of his career at the age of seven. He has been a dual Listed-winner over this seven furlong trip and at six, with those successes coming in 2014 and 2015.

The trainer’s wife, Anna-Lisa Balding, said: “Thanks to the Smith family for being so patient he’s had quite a few hiccups.

“Even though being seven he’s shown today he’s still got it in him, he loves to win I think.”

He’s such a tough character

Earlier in the afternoon, the Francis-Henri Graffard-trained Bateel proved too strong for her opposition in the Group 3 Betway Pinnacle Stakes over a mile and a half.

Having just her second start for the Chantilly-based trainer, the daughter of Dubawi travelled well towards the rear under Richard Kingscote.

Still on the bridle inside the final two furlongs, once asked she shot to the front and went away from runner-up Dubka to score by a length and a half. 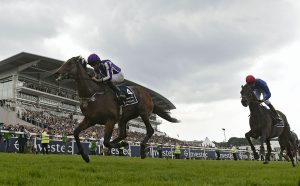 Up Next
Reel invited to take on Winx again