Pinatubo to return to a mile
News

France’s loss is very much the gain of Ireland.

Wootton Bassett is best known as the sire of Almanzor, famously sired out of a first crop that consisted of just 23 foals, but there is far more to him than just that champion.

For one reason or another, several seasons passed before Wootton Bassett gained the respect of breeders. As such, he has never operated with the numerical power of some of his contemporaries but that hasn’t prevented him from maintaining a presence at the top table; indeed, he has rarely been far from the action this year, whether it be as the sire of Classic performers The Summit,  Speak Of The Devil and Mageva, high-class sprinter Wooded or the unbeaten Listed-winning juvenile Chindit.

In that, the management of Etreham should be commended. The stud believed in its horse and have been rewarded as the breeder of a number of his better horses. Larger books and fee increases have duly followed in recent seasons, and given that his first €20,000 crop already include Chindit and Midlife Crisis, there is every reason to think that Nicolas de Chambure’s assertion that he will become ‘one of the top sires in Europe’ is not far off the mark.

Crucially as far as Coolmore is concerned, Wootton Bassett provides a proven route into the Gone West sire line. The cross of Iffraaj over Primo Dominie makes him easy enough to use – he offers something a bit different, and if he goes on to complement those mares carrying Galileo and/or Danehill, then all the better. And in light of Iffraaj’s success in the southern hemisphere, there is every reason to think that Wootton Bassett will also be well received in the southern hemisphere, should Coolmore choose to go that route. 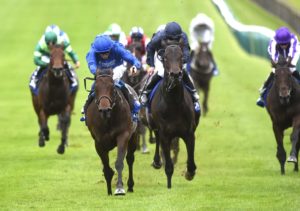 Up Next
Pinatubo to return to a mile