Sue Howell is flying high with Eider heroine Win My Wings – can she double up in the Scottish Grand National?

When a trainer enjoys the best half-hour of his progressive career, as Christian Williams did with a 1-2 in the Coral Trophy at Kempton followed by success in the Eider Chase at Newcastle, the focus understandably is on them, rather than the owners.

It is still a little too much like that generally, though the media is getting  better, assisted by the ROA, and certainly on Williams’ super Saturday the owners of his big-race double went under the radar – despite the trainer’s best efforts to divert attention.

For the owner of Eider Chase heroine Win My Wings, Sue Howell, the victory capped a few notable days of her own, as she had enjoyed a first and second at Ludlow through Duneomeno and Groom D’Oudairies just before.

It was good to see the Eider – which can be the most hard-to-watch race of the year, given often gruelling conditions – contested by 16 runners, with an incredible 14 finishing the four-mile test on good to soft ground.

Win My Wings, who made the 600-mile round trip from Williams’s Glamorgan base with Potters Corner, who was unable to contribute to the diesel and service station pies as he trailed home in rear, started favourite having scored at Exeter the time before and gelled immediately with Ryan Mania to win by a length and three-quarters.

I have loved horses for as long as I can remember.

Howell’s white, black and yellow silks are familiar – asked how many horses she has owned in all, her reply is “too many!” – and as a big supporter of racing the success was fully deserved, her previous big-race triumph having come when the Evan Williams-trained Tiger O’Toole won the 2011 Grade 2 Holloway’s Hurdle at Ascot,

Explaining her route into racing and ownership, she says: “Brought up with cattle, sheep and horses, there was never a dull moment as a child, and I have loved horses for as long as I can remember.

“From a young age I went through Pony Club, competing in local shows, eventing and hunting. Family summer holidays were on the south Devon coast, where we were taken racing as children – I have two older brothers – to Devon & Exeter and Newton Abbot, so the racing interest began at a young age.

“My mother and father always had horses. In my late teens I began point-to-pointing as an owner, qualifying horses myself, then moving on to horses under Rules, which I have continued to enjoy for 20-plus years.

“It’s a family affair, with my son Jason, daughter Amy, and their partners, Paige and Edward, not forgetting my partner Mark; we all have passion for the sport and the love of horses.”

“In a nutshell, our business is recycling,”

Business as well as pleasure is a family affair, which of course underpins their involvement in racing.

“In a nutshell, our business is recycling,” says Howell. “To expand on that, I am co-owner in our family business under the banner of Wye Valley Group, comprising waste management, metal recycling, quarrying and secondary aggregate production, demolition and architectural salvage.

“Year on year, the companies have grown and my role is varied but predominantly finance. For just under five years now I have been a board member of British Metals Recycling Association; my true passion in  business is around metal recycling.”

Howell’s runners this season have been handled by Williams and Worcestershire-based Henry Oliver, and the owner says of her choice of trainers:

“Working with trainers that we can relate to and communicate well with has always been high on our list of priorities.

“In recent years, supporting younger trainers has become important. Christian Williams and Henry Oliver have previously both been successful jockeys and have much enthusiasm and ambition. They have both achieved great results so far and are both true horsemen and great characters.

“Supporting Henry with his first ever winner as a trainer was really quite something, and following on have been more winners, both Flat and National Hunt, plus the desire for many more future runners and winners.

“Christian has proved himself to be a very successful young trainer, achieving victory in bigger feature races. His decision to run Win My Wings in the Vertem Eider was quite a surprise, which paid off handsomely for a nine-year-old mare who was a reasonably-priced purchase.”

She adds: “Dual-purpose trainer Ian Williams is not to be forgotten either, with proven success over the years. That has also come through Milton Bradley, David Evans, Evan Williams, John Spearing, John O’Shea, Graeme McPherson and Bernard Llewellyn.”

Howell has enjoyed more than 70 winners under both codes, so there have been plenty of highlights, and she says: “Magical moments include winning  the Eider with Win My Wings this year, trained by Christian; that will always be very memorable.

“Any winner at any grade is fabulous, and always generates the desire to reinvest again.”

“Also, winning at Cheltenham and Compiegne with her last year – she has proved to be extremely versatile. She has been entered for the Scottish Grand National at Ayr, and we could well go back to France again.

“Winning a Grade 2 hurdle at Ascot some 11 years ago with Tiger O’Toole, who went off at 40-1, trained by Evan Williams, was another brilliant day not to be forgotten.

“Any winner at any grade is fabulous, and always generates the desire to reinvest again.”

Howell continues: “The best times of being an owner is buying young stock and seeing them grow and develop over time, nothing rushed, and seeing  them run for the first time – patience is a virtue.

“When the horses are not in training, or when they are youngsters, it is a pleasure to have them at home. It gives us much more involvement and features highly in our everyday lives.

“Also important is giving them, or finding them, a good home after racing, or a different discipline such as eventing, hunting, team chasing, or  placement with Retraining of Racehorses.

“The worst times are getting balloted out of a race, which is frustrating when we fancy one to run well. “Also, the prize-money in the UK doesn’t compare well with prize-money in France, as we found out last year. We are hopeful of going back to France again this year, a trip, or trips, which will include some well-chosen French wines, as we should be able to travel this year.”

Now that sounds something we could all raise a glass to. 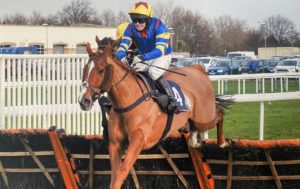 Up Next
Magical Moments - Andy Riley and Manintheshadows