The owner on the tenth anniversary of Champions Day, Kameko, Roaring Lion and prize-money

It was tough getting everyone on board for the first year of Champions Day.

A lot of trainers and journalists were against the idea but I think now everyone loves it. It has become a celebration of racing at the end of the season. I’m very happy with the feedback from owners and trainers. We try to improve it year on year, but this year will be different with the Covid-19 restrictions. It’s unfortunate, but the most important thing is that racing is taking place.

More than anything, we sponsored the British Champions Series because my brother Sheikh Hamad (Chief Executive of QIPCO) wanted to help British racing.

There were problems raising prize-money for Champions Day but it was all about having a worthy finale. Even Her Majesty was there in each of the previous nine years, which we are delighted about. So it’s about helping the sport in Britain, where we have a lot of horses and where our stallions are based. It’s about giving back a bit.

Winning the 2,000 Guineas with Kameko in record time was amazing.

Then we went to the Derby and to be honest, I don’t think anyone learnt anything from it. We were all frustrated after Kameko ran in the Sussex Stakes, where he got no run at all, and the International clearly told us he does not stay beyond one mile. Even so, he got Magical off the bridle in two strides, which is not an easy thing to do. Hopefully Kameko will take his chance in the QEII and show us what he is all about.

It’s been great to have Kameko so soon after Roaring Lion died.

It gave us all a lift when we needed it. We’ve changed our plans in the last few years; we are breeding more of our own horses even though Roaring Lion and Kameko were both bought at auction.

I think the best is yet to come from our breeding programme but that will take a bit of time. There’s a chance Kameko will stay in training but we do need a good stallion, having sadly lost Roaring Lion last year. For any operation of our size to keep going, we need good stallions coming into the programme.

Oisin Murphy was still claiming 3lb when he came on board as understudy to Andrea Atzeni.

When Andrea left we promoted Oisin at a young age and he has gone from strength to strength. It was a proud moment for us when he won the jockeys’ championship last year. Now we have taken on Cieren Fallon as Oisin’s number two. With jockeys only able to ride at one meeting each day, we need a second jockey because consistency is important. To me, Cieren is an outstanding young jockey.

I think prize-money in Britain has been a problem for a long time; it’s the main issue we need to address.

This year, with Covid, I understand the need for cutbacks, but it has really emphasised the problem. I think it’s time we sat down and tried to find a long-term solution because it has been patched up most of the time.

A one or two-year deal is not the way to go because we need security going forward. We have to have a system in place as they do overseas, where they know year-on-year they can put up good prize- money.

At the moment people want to win Classics in England. They are far superior to other races, and that is backed up by the ratings. But you can’t take that for granted. If you wait too long it will become an even bigger problem. Other jurisdictions will start to attract better horses.

We will probably have the same number of horses in Britain next year, but we will be looking at our horses closely.

Those we think are not good enough to become stallions or broodmares will move to where the prize-money is attractive. We have already moved horses to France, America and Australia. We have to be stricter than we used to be about what we keep in training in England. Five years ago we had way too many horses in training. We changed the plan to concentrate on quality and we are seeing the benefits, especially in our breeding programme.

She really enjoys show-jumping and is getting into racing by following our horses. She comes with me to the sales and around the farms. She named Kameko; she was with me at Keeneland and she actually did the bidding on the horse. Then she decided it should go to Andrew [Balding].

We have ten horses in training in the US and have high hopes for them.

We have Shedaresthedevil, winner of the Grade 1 Kentucky Oaks in early September, with Brad Cox, while the six yearlings we bought last year are with Simon Callaghan. We haven’t bought many yearlings: five in 2018 and six last year. It’s an exciting project that will hopefully see us competing in the best races.

It’s been hard being unable to go racing as normal because of Covid.

We’ve been twice: to Derby day to watch Kameko, and to see Darain run at Newmarket. We usually go to Del Mar for the summer, but not this year. There’s not much we can do about it. I have put on weight during lockdown and need to get some of that off because I’d like to start riding out again. 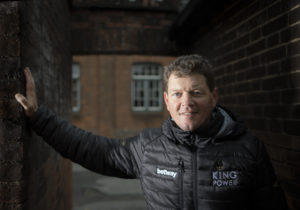 Up Next
The team works