David Ward ready for lift-off with Starman and Primo Bacio

Many were inconvenienced by torrential rains at the tail end of Royal Ascot, yet none will have been as disappointed as David Ward. The man who had live prospects in two Group 1 races was faced with little choice but to withdraw both horses.

Starman traded as favourite for the Diamond Jubilee Stakes until the ground turned soft, while Primo Bacio was denied her chance in the Coronation Stakes for the same reason. It was doubly frustrating for Ward to see Snow Lantern, soundly beaten by Primo Bacio at York in May, finish runner-up in the latter race.

In some ways that rain-check was something of a reality-check for Ward. An emotional man, he was in danger of emigrating to cloud nine after the same two horses doubled up for him at York’s Dante meeting.

The Knavesmire is Ward’s spiritual home. It was where his father took him racing in his youth, so to have won a Listed race for fillies and the Group 2 Duke of York Stakes within 48 magical hours sent his spirits soaring. Besides, there will be other opportunities for his star duo as the season unfolds.

Starman and Primo Bacio make an accurate snapshot of Ward’s growing involvement with racing and breeding. Starman is a homebred son of the Montjeu mare Northern Star, with whom Ward fell in love upon seeing her at the 2011 Goffs Orby Yearling Sale. Starman is Northern Star’s second foal; the first was Sunday Star, a Group-placed winner of two races who is among six mares Ward boards at Whatton Manor Stud.

Primo Bacio will eventually join Sunday Star in the paddocks. A three-year-old daughter of Awtaad, she was bought for 100,000 guineas as a yearling at Tattersalls as part of Ward’s push to raise the quality of his mares. Before too long he wants to breed most of his own racehorses save for the occasional yearling acquisition to diversify his bloodlines.

“The other day I was trying to work out how many horses I have bought,” he says. “It must be somewhere between seven and eight but until Primo came along my two best racehorses were the first two horses I bred.

“With the best will in the world, you don’t always know what you are getting at the sales,” he continues. “I think it’s a sign for me that my homebreds have done so well. The results suggest that is the way I should go, and of course, it’s so much more satisfying. Following them through to their racing days is a completely different experience. It’s like watching your children running in the Olympics.”

So that is the way Ward, 60, plans to go. It wasn’t the plan when he took his first, tentative steps into racehorse ownership 13 years ago. The first two horses he bought cut no ice at all, but he wasn’t there for the beer. A more profound undercurrent carried him along in the swell of his father’s legacy.

Ward was in his late 40s when Donald died. A second-generation guardian of the family’s sizeable recycling business, Donald was a man who liked a bet and loved the sound of hooves pounding the turf. He would return home from work before lunch to scoop up whichever of his children wanted to go racing and they’d be on their merry way. 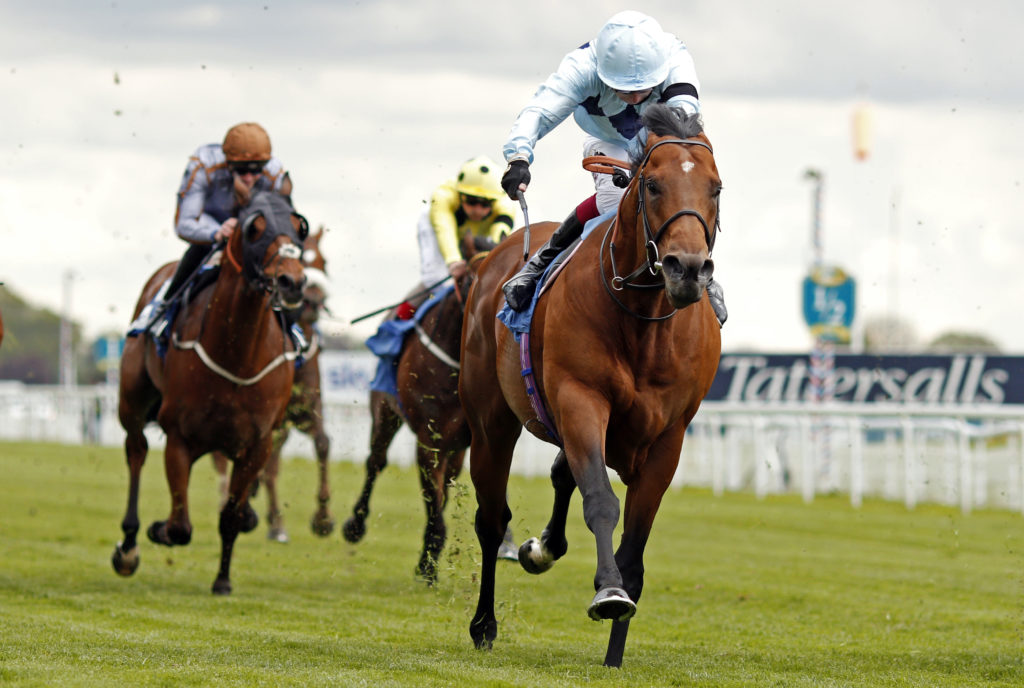 Starman wins the Duke Of York Stakes at York in May – Photo: Steven Cargill

“One of my earliest recollections as a child was of Lester Piggott winning the Stewards’ Cup from stall one, which in those days was virtually unheard of,” Ward reminisces. “I did a number of things when my father died and this [buying a racehorse] was one. It’s a journey I wish he could have taken for himself but he came from a generation that felt it wasn’t for him to do.”

Given the fact that racehorses are today owned by a broad cross-section of society, in particular footballers and entrepreneurs of humble roots, Ward’s words shine a revealing light on late twentieth-century perspectives. It may be hard to conceive in the present age but there was a prevailing sense that flaunting self-made wealth was unappealingly ostentatious.

“The world has changed in a big way,” Ward reflects. “It’s a smaller place and people have expectations; a lot of things are more accessible. My father would have loved owning horses. He would have been absolutely overjoyed, and for my part I felt life was too short. Here was an opportunity to realise my dream, and I hope my father is enjoying it from where he is.”

It’s clear from talking to Ward that his knowledge of racing is broad. It’s a superior kind of knowledge than is gleaned from betting: he is a diehard enthusiast who thinks about horses like a man to the game born. Equally, he recognises the assets brought by specialists in their field; hence his close working relationships with his main trainer, Ed Walker, and the bloodstock agent Ed Sackville, who buys his yearlings and advises on mating plans.

Ward is very involved in deciding where his horses should run. “I talk to Ed [Walker] a lot but I try to avoid the idiosyncratic tracks,” he says. “That’s why Primo Bacio ran at York. If she’d run at somewhere like Epsom and ran badly, you’re not always sure whether the track was to blame.

“Following them through to their racing days is a completely different experience. It’s like watching your children running in the Olympics”

“At places like York you know where you stand at the end of a race,” he continues. “And I enjoy that side of it, too. Trying to find the right opportunity for horses is an interesting exercise. Also, I don’t bet, so running through the handicap ranks is not my thing – I’d far sooner run well in a good race than win a poor race.”

Ward’s relationship with Walker, who trains Starman and Primo Bacio, has been pivotal within his more intimate embrace of the sport. He had horses with a handful of other trainers before he chose to coalesce around Walker, since when he had increased his spend.

“We are close, we get on well and we both think the same way,” Ward says. “If there’s ever any doubt about the horses, we wait. I don’t want to see my horses banged out every few weeks, and Ed is patient even though he is a young trainer making his way. He puts heart and soul into it. He is nicely settled at Kingsdown, and whatever people might say, I think consistency is good for horses.”

Ward’s views on what best suits horses were formed from days he spent riding in the company of his wife Sue and daughter Siwan, who has her own property and stables a few miles away from the family home near Ashbourne, in the Peak District.

Ward, too, has stables on his land, which gave him the opportunity to take in the aforementioned Northern Star when she was injured during her three-year-old campaign in 2013. He spent plenty of time around the filly as she convalesced, in the process striking up a special bond with her. 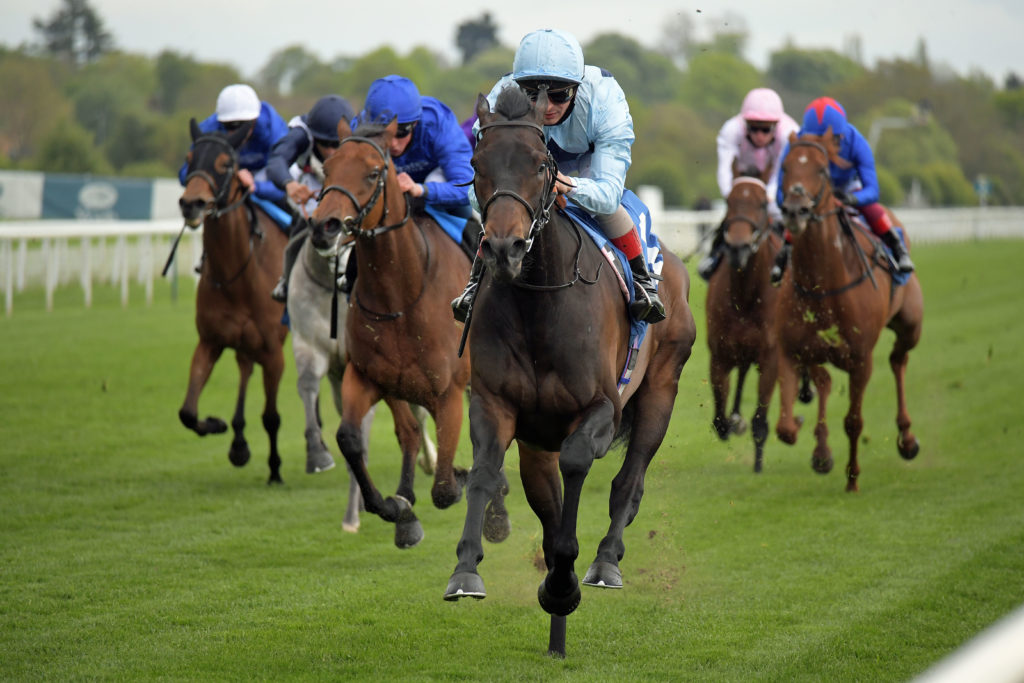 Primo Bacio, seen her winning at York in May, is another of David Ward’s exciting hroses – Photo: Bill Selwyn

Northern Sar won once from nine starts and went on to become Ward’s first broodmare. Her first foal, the Kodiac filly Sunday Star, joined her dam at pasture on her retirement last year.

A valuable commodity through her superior racing exploits, Sunday Star’s value rose still further when Starman, her year-younger half-brother, swiftly made his way through the sprinting ranks. But Ward cherishes Northern Star’s clan for other reasons.

Tragically, Northern Star died after giving birth to her third foal, a Kingman filly born in 2018, who Ward named Lodestar. Then Sunday Star, due to be bred to Frankel this year, had problems cycling and was found to have a cyst in one of her two ovaries, which had to be surgically removed.

The setback shook Ward to the core; so much so that he recalled Lodestar from Walker’s string before she had even run. He was taking no chances with Northern Star surviving daughters, of which there were just two.

But there is better news of Sunday Star, who has rebounded from surgery sufficiently for her date with Frankel to go ahead next year. And Lodestar has been successfully bred to Dutch Art. Any live foal from that union will be a three-parts sibling to Starman.

“When Northern Star died it was heart-breaking,” Ward reflects, “and when I heard about Sunday Star’s predicament, the decision to retire Lodestar without her having run was made for me. Lodestar showed ability but I am not a commercial breeder. It makes no difference to me that Lodestar might have won at Wolverhampton last winter.

“Here was an opportunity to realise my dream, and I hope my father is enjoying it from where he is”

“I am much more interested in trying to perpetuate Northern Star’s line. In time I will breed from Primo Bacio and see how that works out. I will give her every chance, although I don’t always use [what are described as] top-class stallions because the most expensive ones don’t necessarily get the best results.”

The optimum scenario for Ward and his family is to have a dozen horses in training and six mares to breed from. Tempting as it is to base mares and their progeny at home, where he has the facilities and where he could see them every day, he is mindful of the expertise required to rear thoroughbreds to best effect.

Meanwhile, he can look forward to Starman and Primo Bacio’s exploits in the coming months. Starman may yet emerge as the champion sprinter, a fate Ward intends to explore with the horse running in his silks despite lucrative offers from interested parties to secure him for stud duties.

“We’re holding fast, certainly for this season,” Ward says. “I may never have another like him, which is why I want to be sure we are doing the steering, so to speak. Money cannot buy the thrill he has already given us. Not in a heartbeat.”

On a more personal level, Ward’s journey in racing serves to remind him of a father lost well before time, and of the prospect that he too will be remembered in the same racing context.

“I have had a taste for breeding through two horses that have given me some of the best moments of my life,” he reflects. “When I am dead and gone, I hope my children and their children will talk about it. And you never know, I might even get a mention in passing.”

Up Next
The Finish Line with Sean Woods