Not to forget
Exclusive Columns

What a wonderful racing world

Having spent a number of enjoyable January weekends on the Route des Etalons and Irish Stallion Trail, I decided to follow the path less travelled this year and make my way to Germany.

There’s no official tour in that country but I had a wishlist of studs and stallions I was longing to see and all I needed was a willing accomplice to help me navigate the hundreds of miles between Germany’s major stud farms. In fact, I found two.

Liam Norris left Granham Farm in the more-than-capable hands of his wife Jenny and we flew to Bremen to meet Philipp Stauffenberg, best known, with his wife Marion, as a sales consignor par excellence and breeder of Group 1 winner Lady Marian.

In this instance, however, Philipp also proved to be an outstanding tour guide, breeding historian, advisor on the varieties of German sausage and (very fast) chauffeur. We are hugely indebted to him for giving up four days to show us the delights of his country’s breeding industry, not to mention the odd bierkeller.

In this column over the years I’ve made no secret of the fact that I love nothing more than a good stayer. As a very small hobby breeder, it remains my aim, however unpopular and uncommercial it now is, to breed a top-class Cup horse.

In this regard, Germany may well be my spiritual home. At farm after farm I found myself nodding in fervent agreement with the comments of our hosts.

“The aim of most of our clients is to have a runner in the Derby,” said Stefan Ullrich of Gestüt Fährhof.

“I wouldn’t stand a stallion who had raced only at two. For me, a stallion has to have proved himself season after season on the racecourse,” added Gestüt Auenquelle’s Karl-Dieter Ellerbracke.

These statements would have been commonly heard in this country some decades ago, and for some they still hold true, but the reality is that a large segment of the breeding community now has to consider the commercial viability of their businesses, and mating choices often come down to how appealing a resultant (preferably colt) foal will be to the marketplace rather than how suitable a particular stallion is for the mare in question.

Writing in the Racing Post recently, TBA board member Bryan Mayoh highlighted how many stallions standing here under the National Hunt banner offer terrific value for Flat breeders with Classic aims and he’s right, except that realistically they can often only be used if the breeder is planning to race the offspring. 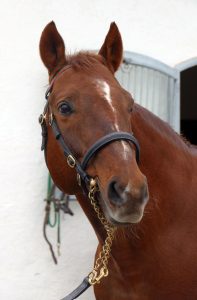 Boreal, was the first German-trained horse to win a Group 1 race in England

In fact, for those with the means to do so, the potential rewards down the line can be far greater than selling middle-distance stock as yearlings, as we’ve seen by the influx of overseas buyers to horses-in-training sales in recent years.

Starting as we mean to go on
Anyway, it’s a fresh new year and we should start in a positive vein. Having come close to breaking several land speed records on the autobahn en route to our final port of call at Gestüt Ammerland, with its stunning backdrop of the Alps, I found myself sitting at Munich airport reflecting on how fortunate we all are to be in this business in the first place.

The sometimes sheer awfulness of racing politics – and don’t even get me started on the potential loss of Kempton – can make us wonder if it’s all worthwhile, but a trip anywhere to speak to like-minded horse people always provides a fillip.

It’s hard to think of too many other lines of work, if we can call it that, in which you can turn up almost anywhere in the world and if you have a common love of racing and horses you are welcomed into the homes of complete strangers and treated like an old friend, even if the last time you attempted to speak their language was when scraping a pass in German O-Level in 1985.

I’m always in awe of the people who look after stallions – and we can hear about Dubawi’s special friend on page 104 – as it can at times be a dangerous job. It was, therefore, especially heartening to see the bond between Ralf Kredel and his three very relaxed stallions at Gestüt Etzean.

The farm’s unusual practice of turning a stallion out with a mare clearly reaps benefits when it comes to the mental wellbeing of a horse who may well otherwise spend his entire life after going into training away from his natural place in
a herd.

A heartfelt thank you to all the German breeders we met at the farms detailed in our feature on pages 56 to 62. Their warm welcome was a timely reminder that however racing’s politics may divide us, the horse will always unite us.

Up Next
Not to forget