Shadai Stallion Station has been home to numerous famous stallions, including the multiple champion sires Northern Taste, Sunday Silence, King Kamehameha and Deep Impact. Between them these four have dominated the champion sire title for most of the last 40 years, so anyone could be forgiven for being less familiar with Kurofune, another of the Shadai stalwarts who died earlier this year at the age of 23.

Kurofune was actually bred in the US. Foaled in 1998, this grey or roan son of French Deputy was sold for $70,000 as a yearling before coming to the attention of Katsumi Yoshida at the Fasig-Tipton Florida Select 2-Year-Olds in Training Sale in 2000. Yoshida had to pay $430,000 for the colt, whose sire French Deputy was recruited to join the Shadai team towards the end of 2000.

Together with the smart Japanese colt Nobo Jack, Kurofune no doubt played his part in Shadai’s decision to buy French Deputy, as the striking grey made a fine start to his racing career in 2000. After setting a ten-furlong track record at Hanshin in winning his maiden on his second start, Kurofune went on to record another impressive win in early December and finish third behind Agnes Tachyon and Jungle Pocket – future winners of the Japanese 2,000 Guineas and Japanese Derby – in a Group 3.

Although Kurofune’s three notable performances at two all came over a mile and a quarter on turf, he proved at three that he was pretty versatile, both in terms of distance and racing surface. A winner of four of his six starts in 2001, Kurofune enjoyed Group 1 success in the NHK Mile Cup on turf and in the Japan Cup Dirt, over an extended mile and a quarter.

By the time he retired to Shadai in 2002, his sire French Deputy was beginning to look a serious loss to the American breeding industry. After a slow start he had been represented by a string of Graded/Group winners, headed by the dual Group 1 winner Left Bank in the US. Nobo Jack had also enjoyed a highly fruitful 2001, reeling off six consecutive Graded races on dirt, including the Group 1 JBC Sprint, so there was good reason for Japanese breeders to support Kurofune.

Support him they did, and he made an excellent start, siring a first crop which featured Fusaichi Richard, winner of Japan’s top two-year-old prize, the Group 1 Asahi Hai Futurity, in 2005. The consequence of that early success was that Kurofune was bred to 246 mares the following spring and he also covered 200 or more mares in the six years between 2008 and 2013.

Obviously, he needed a steady supply of important winners to maintain this degree of popularity and among them were the fillies Sleepless Night and Curren Chan, both winners of the Group 1 Sprinters Stakes, Whale Capture, another filly who landed the Group 1 Victoria Mile, and Clarity Sky and the filly Aerolithe, both successful in the Group 1 NHK Mile Cup.

The chances are, though, that Kurofune is destined to be best remembered as the sire of this year’s eye-catching Japanese star Sodashi. Not only is this three-year-old filly very good, as she has shown by winning all five of her races, including the Group 1 Hanshin Juvenile Fillies and the Group 1 Oka Sho, the Japanese equivalent of the 1,000 Guineas, but she is also one of those rare thoroughbreds born white Sodashi’s dam, the four-time dirt winner Buchiko, is also registered as white, but unlike her daughter, Buchiko has a black mane (and white tail) and a body splashed with black spots.

A daughter of the bay King Kamehameha, Buchiko was produced by Shirayukihime, who was registered as white, even though her parents, Sunday Silence and the American-bred mare Wave Wind, were registered as dark bay.

Most of Shirayukihime’s foals were white, including four by King Kamehameha and three by Kurofune. Another of her Kurofune foals, Mama’s Dish, was grey, so presumably wasn’t born white, unlike Mama’s Dish’s sister Yukichan, winner of the Kanto Oaks and two other Listed races on dirt.

Another sister, Marshmallow, passed on her white colour to her King Kamehameha colt Hayayakko, who became a Group 3 winner on dirt. Yukichan is also the second dam of Meikei Yell, winner this year of the Group 2 Tulip Sho over a mile on turf, but this grand-daughter of Deep Impact is bay. The Yukichan branch of the family has also produced white foals to the bay stallions Harbinger, Lord Kanaloa, Johannesburg, Novellist and Drefong, so it appears to be a powerful gene. 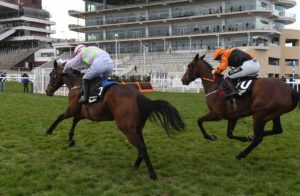 Up Next
Equality in horseracing means open competition