Kodiac: is the best yet to come?
Exclusive Columns

The celebrated politician Ken Clarke was not a fan of the horseracing industry. In his autobiography, he wrote of the time when he was Home Secretary in 1992: “Far too much of my time was occupied in trying to reconcile the competing interests of racecourses, racehorse owners, bookmakers and the Tote.

“All these interest groups hated one another with deep bitterness and were constantly bringing me proposals to gain an advantage over the others.

“It came to a head when I discovered that one of my duties as Home Secretary was to settle the annual negotiations about the size of the levy which the betting interests were obliged to pay to subsidise the sport upon which they so heavily depended.”

It is a very graphic illustration of how times have changed in racing politics, although many would argue it has taken the industry far too long to learn the lesson of speaking with one voice when making approaches to government.

We have, nonetheless, now learnt this lesson and we continue to reap the rewards. We have also learnt that governments listen when you speak in terms of jobs, the rural economy and self-help, and less so when your message is self-serving.

Had we not learnt this in recent years we would surely not now be looking at a much-improved picture for racing. Without government help – and particularly that of Matt Hancock, who until recently was the culture secretary – we would not have been able to change legislation widening the scope of the levy and allowing racing to annex an increased income of around £50 million annually.

Neither would we have been in a position to set up the Racing Authority, letting British racing, for the first time in nearly 60 years, take responsibility from the Levy Board for spending the money collected from the betting industry under the terms of a statutory levy system.

Or, for that matter, seeing the collection function of the levy being carried out by the Gambling Commission, which will happen next year, and which will continue to exert the most exacting standards of audit.

Of course, the importance of working with the government is going to be even more vital in the years ahead.

Nobody needs reminding of the fallout from Brexit and the crucial importance for European bloodstock in maintaining the free movement of horses and the people who look after them.

Then there are the impending financial consequences for racing stemming from mass betting shop closures when the impact of cutting stakes on fixed-odds betting terminals (FOBTs) falls on bookmakers.

Government is very much alive to these concerns and has already indicated it is willing to look at a further extension of the levy so it is charged on bets placed in Britain on global racing (which would include Ireland).

Another step might be to look at how a future levy could be based on a hybrid system that also takes in an element of betting turnover as well as gross profits.

If racing is to continue to have the ear of successive governments, whatever their political complexion, it must show both a determination to help itself and an understanding of the modern world that has no place for the old injustices of social and racial divisions.

It is true that racing has and always will have friends in high places, but even a left-wing Labour government would surely be more interested in increasing employment in rural areas than succumbing to prejudice against what they see as a rich person’s sport.

The drive for ongoing improvements in horse welfare is another area that sits comfortably with almost all politicians.

Our sport’s increasing relevance to this government has everything to do with the building up of excellent personal relationships, which have fostered a much better understanding between government officials and the sport’s representatives.

Had this happened back in the nineties, perhaps even Ken Clarke would now have more kindly recollections of the racing world. 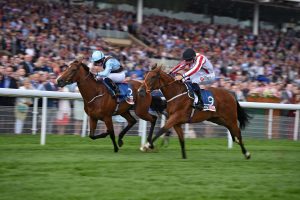 Up Next
Kodiac: is the best yet to come?