Van Gogh the latest masterpiece for Doff The Derby family

Wide-margin Criterium International hero is yet another stakes performer out of talented mare Imagine and from a family that is also responsible for Generous, Moonlight Cloud and Sobetsu

Two Group 1 juvenile events and a Group 3 for good measure – it was all in an hour’s work for Jim Bolger as a breeder during Saturday afternoon as Gear Up, Mac Swiney and Flying Visit captured the Criterium de Saint-Cloud, Vertem Futurity Trophy and Eyrefield Stakes within minutes of each other. Not only that, the winning trio came just a week on from the victory of another Bolger-bred, Poetic Flare, in the Killavullan Stakes at Leopardstown.

As might be expected from a Bolger graduate, each possesses a background that consists of some familiar Bolger elements. Teofilo, his homebred juvenile champion of 2006, came out of the day strongly as the sire of Gear Up and damsire of Mac Swiney and Flying Visit. Bolger’s other champion son of Galileo, Derby hero New Approach, is the sire of Mac Swiney and paternal grandsire of Poetic Flare, sired by New Approach’s best son Dawn Approach.

While Bolger’s Group race sweep deservedly attracted the plaudits, there was another noteworthy angle to Saturday’s action in the wide-margin win of Van Gogh in the Criterium International at Saint-Cloud.

Bred by Barronstown Stud, Van Gogh is yet another stakes performer out of the 2001 Oaks heroine Imagine and therefore the latest high-flying member of the Doff The Derby family also responsible for Generous, Moonlight Cloud and Sobetsu.

When Imagine landed the Oaks for Aidan O’Brien in June 2001, having previously captured the Irish 1,000 Guineas, her dam Doff The Derby became the first mare in 87 years to produce the winners of both Epsom Classics.

The daughter of Master Commander had struck nine years earlier as the dam of Generous, whose five-length win over Marju in the Epsom showpiece was the highlight of an outstanding three-year-old season for Paul Cole that also consisted of victories in the Irish Derby and King George.

Generous, the best sired by Caerleon, and Imagine, by Sadler’s Wells, were the crowning points of an illustrious stud career for Doff The Derby.

However, such an outcome might not have always come across as likely.

Bred by Nelson Bunker Hunt out of 1966 Margate Handicap winner Margarethen, by Tulyar, Doff The Derby was unraced. However, that was by accident, with the mare having suffered a broken tail in an accident as a yearling.

Instead, she was covered in California as a two-year-old in 1983 by the Californian Derby winner Jaklin Klugman, the result of which was the June-foaled Windy Triple K, a Listed winner at Santa Anita.

Doff The Derby already boasted fine connections as a half-sister to Hunt’s European champion Trillion, winner of the 1978 Prix Ganay (and later the fourth dam of Treve). By the mid-1980s, however, the family was in full bloom thanks to another outstanding daughter of Margarethen in Triptych, whose nine Group 1 victories included the 1985 Irish 1,000 Guineas and two renewals of the Champion Stakes.

It was during that era that Doff The Derby came into the possession of David and Diane Nagle’s Barronstown Stud.

Sent to a succession of Irish-based Coolmore sires, she immediately rewarded her connections by producing the National Stakes runner-up Wedding Bouquet to King’s Lake. Although she was ultimately disappointing at stud as the dam of only two winners, one of them, Ventura, went on to breed champion Moonlight Cloud.

Probably, Hawaafez and Talwar are other Group-winning descendants of Wedding Bouquet.

Generous was Doff The Derby’s third foal and was followed by the Last Tycoon colt Osumi Tycoon, a Listed winner and sire in Japan.
Doff The Derby’s major legacy today extends through her Sadler’s Wells daughters, the first of whom was the non-winning Shinko Hermes. That mare foaled no fewer than ten winners including Listed scorer Lake Toya and Snow Pine, in turn the dams of Godolphin’s Group 1 winners Sobetsu (won the 2017 Prix Saint-Alary) and Tower Of London (a top sprinter in Japan). Shinko Hermes is also granddam of the 2016 Japanese 2,000 Guineas winner Dee Majesty.

By comparison, Strawberry Roan was talented enough to run second in the 1997 Irish 1,000 Guineas for Aidan O’Brien. However, she foaled just one stakes horse, the South African Group 1-placed filly Berry Blaze.

Imagine was the final foal out of Doff The Derby, and a fitting one at that as a representative of that precious combination of race record and outstanding stud career.

She was a tough filly for O’Brien, progressing through a busy two-year-old season to emulate Wedding Bouquet with a win in the C. L. Weld Park Stakes before returning at three to spring a 16/1 surprise in the Irish 1,000 Guineas en route to her Oaks victory.

Imperious! Aidan O’Brien has another big 2021 Classic prospect on his hands as American Pharoah colt Van Gogh dazzled in the hands of @PCBOUDOT in Group 1 company…

At stud, she was quick off the mark as the dam of Horatio Nelson (by Danehill), the ill-fated Prix Jean-Luc Lagardere winner, in her first year at stud.

Visits to Rock Of Gibraltar then yielded the Group 1-placed Red Rock Canyon and Rockfel Stakes winner Kitty Matcham in consecutive years. They were followed by Group 2 winner Viscount Nelson, who shared his sire, Giant’s Causeway, with another talented younger sibling in the Grade 3 scorer Point Piper. Both are now at stud; Viscount Nelson has enjoyed some early success in Chile while Point Piper retired to stand in California in 2019. Red Rock Canyon, meanwhile, is a Group 1 sire in Brazil.

Van Gogh is one of ten winners out of the mare and the fifth stakes winner. From the second crop of American Triple Crown hero American Pharoah, he is a fine representation of the support that has been afforded to that stallion, who began his stud career at Coolmore’s American arm, Ashford Stud in Kentucky, at a fee of $200,000.

American Pharoah was North America’s leading first-crop sire of 2019 but a first Group or Grade 1 winner didn’t arrive until earlier this month when Harvey’s Lil Goil obliged in the Queen Elizabeth II Challenge Cup on turf at Keeneland. Van Gogh has provided the sire with a quickfire Group/Grade 1 double while underlining his stock’s increasingly apparent affinity for turf – a surprising development in light of his own race record and dirt background.

Imagine, meanwhile, has a yearling filly by American Pharoah and now aged 21-years-old, lives in retirement at Ashford Stud. 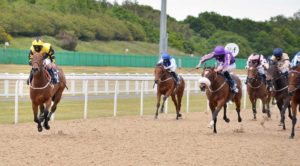 Up Next
Grounds for optimism in difficult times