The unfolding saga of Brexit, the prospect of mass betting shop closures and the increasing emphasis being put on welfare issues are just three subjects that will place an enormous strain on the leaders of British horseracing over the coming months and years.

These challenges will certainly test the mettle of the British Horseracing Authority but it is important to remember the BHA does not have sole responsibility for all those matters that might significantly impact on horsemen and racecourses.

The overall future strategy of racing ultimately stems from the Members Committee whose membership and terms of reference are based on a tripartite agreement between the BHA, the RCA and members of the Horsemen’s Group, of which the ROA is one. How well the committee carries out its intended function largely depends on whether the representatives of the individual bodies can adopt a holistic approach to the decisions they make.

Here we should perhaps be reminded that the history of racing administration, in its various manifestations, is littered with instances of disunity and racing suffering as a result. At its worst, we have seen how arguments have spilled over into the public arena and conflicting messages sent to exasperated government officials.

In recent years, however, we have learnt from those lessons and seen how much more can be achieved when racing acts together, especially when getting politicians and government on-side.

It is important the Members Committee never loses sights of this and, if the committee is not working as well as it should, then it must find a structure that allows it to do the job for which it was intended. Certainly, there has to be argument and conjecture but let’s make sure it takes place behind closed doors and only when a united view emerges must the debate enter the wider world of racing and beyond.

The consequences of the widespread closure of betting shops will demand swift, decisive action, as will the fall-out from Brexit, especially if there is a no-deal on March 29. In both instances we will need plenty of support from government.

In this political environment, where things are changing daily, it is impossible to have any certainty about what challenges Brexit will eventually pose for racing. We do know, however, in the eventuality of a no-deal, the free movement of horses and their carers across EU countries would be greatly frustrated, with racing and bloodstock facing a very difficult future.

The same might be said of British racing generally when the effect of the FOBTs decision begins to bite and racing is caught in the chill wind of mass betting shop closures, causing income and prize-money to fall. By way of illustration, ARC has already responded to this fear by announcing a £3 million cut to its prize-money contribution in 2019.

It is reason enough to remind ourselves that, when the FOBTs decision was made by government, serious conversations took place about the possible extension of the levy to include bets placed in Britain on overseas racing and, even more radically, the changing of the basis of the levy to a hybrid system that includes turnover as well as gross profits.

Changing times and personnel combined with increasing pressure on parliamentary time and legislative programmes, will make it too easy for these ideas and proposals to be brushed under the carpet. However racing must strive to keep these doors open and show the government that it is willing to adapt in response to increasing animal welfare concerns.

Welfare is a subject that will become more demanding as time goes on and it is clearly better that racing makes its own changes to stay in tune with public opinion rather than have changes imposed upon it.

It is crucial to British racing’s future, therefore, that our Members Committee reflects the tripartite agreement in showing leadership qualities by balancing the arguments and forming policy that is for the long-term good of the sport rather than in the interests of their own constituents. 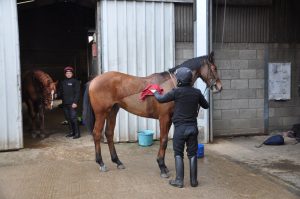 Up Next
Attracting a more diverse workforce is industry goal