Uncle Mo top of the class

According to one report on the Powerball USA lottery in mid-January, the odds against winning the mammoth jackpot were 292,200,000 to one. Even so, three people earned the right to share a winners’ prize of $1,586,000,000.

The odds are also quite considerable against anyone producing a top-class stallion prospect with an outcross pedigree. However, the increasingly urgent need for new bloodlines at the top end of the market means that such a stallion would virtually also have a licence to print money. 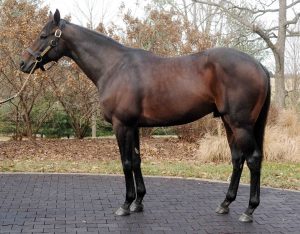 The early signs are that the syndicate which owns Uncle Mo is in that enviable position. No doubt some would argue that a horse with three lines of Northern Dancer isn’t exactly an outcross, but only one is as close as Uncle Mo’s fourth generation. His sire is Indian Charlie, his grandsires are In Excess and Arch and his great-grandsires are Siberian Express, Leo Castelli, Kris S. and Dixieland Band, so he doesn’t create close duplications with the vast majority of mares.

From an American viewpoint, breeders must love the fact that Uncle Mo has no Mr Prospector, Storm Cat, A.P. Indy or Unbridled blood. And for any European brave enough to use a dirt horse, he has no Sadler’s Wells/Galileo and no Danehill or Green Desert (though Danzig appears in the fifth generation of Uncle Mo’s foals).

Uncle Mo has made a tremendous start at stud, coming out top in three different measures of class

In typical Ashford Stud manner, Uncle Mo had numbers on his side when his first crop reached the track in 2015, with the American Jockey Club crediting him with 167 live foals from 211 mares covered in 2012. Even so, he has made a tremendous start, coming out top in three different measures of class.

At one stage it looked as though Scat Daddy was uncatchable in the race to become America’s champion sire of two-year-olds. He had, after all, been represented by six individual juvenile Graded stakes winners by early October and had earned himself a rise in fee from $35,000 to $100,000 (only to die in December at the age of 11).

However, Uncle Mo was able to cut him down with a late flourish which took his total of stakes winners to seven, including three at Graded level. The telling blow came when Uncle Mo’s unbeaten son Nyquist followed in his sire’s footsteps to win the Breeders’ Cup Juvenile. This eye-catching start resulted in Uncle Mo’s fee soaring to $75,000. He had spent his first two years at $35,000, his third at $27,500 and his fourth at $25,000.

The next indication of Uncle Mo’s potential came towards the end of January, when the entries for America’s Triple Crown events were published. With 19 nominees, Uncle Mo topped the list, his nearest pursuer, on a mark of 16, being the 300,000-dollar Tapit. The only others to achieve double figures were Bernardini (13), Candy Ride (12), the deceased Smart Strike (11) and Flatter (10).

Next came the publication of the official two-year-old rankings, the Experimental Free Handicap. Once again Uncle Mo proved to be the most prolific sire of qualifiers, with a total of ten. His nearest pursuers, with eight, were Scat Daddy and Tapit, with Bernardini next with a figure of six. It could be argued that Tapit at least shared the honours, as seven of his eight qualifiers, including the exciting Mohaymen, were rated 110 or higher. However, six of Uncle Mo’s representatives also reached that level, with Nyquist on top with 126. The others were Gomo (118), Mo Tom (115), Thrilled (113), Mokat (111) and Uncle Vinny (110).

Can Mo’s momentum continue?
The question now is whether Uncle Mo can maintain his progress. After all, his own second season proved a little anti-climactic for a colt who had been good enough to top the Experimental by as much as 5lb (his weight of 128lb was the highest awarded since 1997). Not that Uncle Mo’s second season was a disaster, even though it was seriously interrupted by illness. The compilers of the World Thoroughbred Rankings still considered him the joint-second best American three-year-old. On one occasion he went down by only a nose to the sprint specialist Caleb’s Posse in the seven-furlong Grade 1 King’s Bishop Stakes after an absence of 20 weeks. On another he landed the Grade 2 Kelso Handicap over a mile in very fast time. One question left unanswered was whether he would have stayed well enough to win any of the Triple Crown events, had he been well enough to contest them.

The very early signs are that Uncle Mo’s progeny will continue to shine at three, with Mo Tom becoming his fourth Graded winner in the Grade 3 LeComte Stakes. Indeed Uncle Mo isn’t a neat, quick-maturing sort. He stands 16.2 hands and his pedigree contains several other big individuals. His sire Indian Charlie was 16.3, his grandsire In Excess was 16.2 and his great-grandsire, the French 2,000 Guineas winner Siberian Express, was a 16.2 ½-hand son of the 16.3-hands Caro.

The gulf between dirt and turf has become so deep that it is tempting for Europeans to dismiss Uncle Mo as a specialist dirt horse with limited chances of succeeding in Europe. But is there any justification for such a knee-jerk reaction, with hardly any racecourse evidence in Europe?

There are a few straws to be grasped at. His sire Indian Charlie was given very few opportunities to prove himself in Europe, but his son Western Reserve – out of a smart Oasis Dream mare – showed very useful form on turf and all-weather in England last year.

Don’t forget, either, that Uncle Mo’s grandsire In Excess was a European import to the US. In Excess arrived in the States in 1990, having won three of his six starts at up to seven furlongs. He continued in fine form on turf as a three-year-old, winning a pair of Grade 3s over a mile and an eighth. Bearing in mind that his dam Kantado and broodmare sire Saulingo had raced almost exclusively over five furlongs, his stamina came as a bit of a surprise. Even more surprising was In Excess’s successful transition to dirt racing as a four-year-old. He became a quadruple Grade 1 winner from a mile to a mile and a quarter (over which he set a track record in the Suburban Handicap). This ability to shine on dirt could perhaps be attributed to the champion American two-year-old Warfare, sire of the dam of Siberian Express.

There is also some encouragement to be drawn from the records in Europe of the first three stallions in the bottom half of Uncle Mo’s pedigree. Despite having raced exclusively on dirt, Arch made his mark via the likes of Les Arcs (Diamond Jubilee and July Cup), Pomology, Arch Swing, Arch Rebel, Montgomery’s Arch and Waterway Run. Similarly, Arch’s sire Kris S. – another dirt horse – did very well with his sons Kris Kin (Derby), Dr Fong (St James’s Palace Stakes) and Lucky Story.

Dixieland Band, who gained all eight of his wins on dirt, also had a pleasing record with his runners in Europe. He enjoyed Group 1 success with Drum Taps, Egyptband and Menhoubah and also sired several Group-winning European two-year-olds.

Early turf form pointers
In the circumstances we shouldn’t be too surprised that several members of Uncle Mo’s first crop have already earned black type on turf. His daughter Thrilled failed by only a nose to win the Grade 3 Miss Grillo; his son Uncle Brennie won the Sunday Silence Stakes; his daughter Mokat failed by only half a length to win the Grade 3 Jimmy Durante Stakes; and Little Mo was a close third in a well-contested Kitten’s Joy Stakes.

It would be very convenient if Uncle Mo’s first Australian crop were to provide further evidence that he can shine as a sire of turf horses. Unfortunately it appears that Australian breeders were somewhat wary of him in his first three seasons. After he covered 80 mares at a fee of AUS$24,200, his fee was reduced to AUS$16,500 and he next covered books of 95 and 103. However, his bright start in America didn’t go unnoticed in the second half of 2015, when he covered 193 mares in his fourth Australian season. With 63 live foals in his first crop in Australia, Uncle Mo will find it much harder to impress there than in his homeland. At the time of writing he had had just four runners, but two of them – both out of grand-daughters of Danehill – had won.

Of course there can be a considerable difference between turf courses in Europe and America, where races are usually transferred to dirt when the ground comes up soft. That said, there is enough encouragement in Uncle Mo’s pedigree to suggest that he could sire smart turf performers from European mares – given the chance.

But even if no-one is brave enough to gamble on this possibility, Uncle Mo should continue to shine in the US. His second crop yearlings averaged over $117,000 and sold for up to $700,000.

Up Next
Big year for Dansili as four follow Zoffany