Which race in the 237-year history of the Derby ranks as the most sensational? For most the issue would surely come down to a choice between 1844 and 1913, the years in which the first horse past the post suffered disqualification, the former all about an over-age ringer, the latter concerning an owner penalised for having had an affair with the senior steward’s sister-in-law.

Perhaps 1913 shades it, as that was also the year when a suffragette was killed by the hooves of the King’s contender, but there is also a case for the Derby staged 150 years ago this month. The events leading up to Hermit’s victory in 1867 were truly extraordinary, and its consequences hardly less so.

The principal actors in the drama, both born in the early 1840s, were two extremely wealthy young men from privileged backgrounds. Both inherited extensive country estates in their youth, one of them a lengthy list of titles in the British peerage as well. 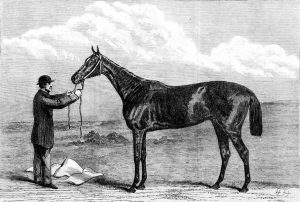 Henry Chaplin, scion of a distinguished Lincolnshire family, was only a teenager when he came into a fortune and the imposing edifice that was Blankney Hall on the death of an uncle. Henry Weysford Charles Plantagent was not yet ten when he inherited the equally impressive Donington Hall, in Leicestershire, and his string of titles, chief among them Marquis of Hastings.

In light of the way upper-class Victorian society was constructed, it was inevitable the paths of two such almost exact contemporaries would cross, and they may already have been acquainted before their known association at Christ Church College, Oxford. Harry Hastings, an Old Etonian, arrived in 1860, some time after Henry Chaplin, an Old Harrovian, had become established there, so well-connected that the Prince of Wales looked up to him and was glad of his friendship and company.

In 1862 Chaplin and Hastings both found themselves in demand for ‘the season’, that round of London balls and functions in which eligible bachelors were scrutinised by mothers of daughters who needed to be partnered advantageously. The titles suggested Hastings might represent the better catch, but he seemed to be a delicate sort, for all his charm, and it was said that he gambled.

Chaplin impressed as probably the steadier fellow, with his august bearing, but there were rumours that he was just as reckless with his money. Neither man took these events very seriously, each choosing to enjoy the fun that single life allowed and to bide his time before actively seeking a bride.

Of course, that state of affairs was not going to last forever, and while both men began to harbour aspirations about a successful career on the Turf, adding another aspect to their friendship, Chaplin was first to determine to end his bachelor days. His choice as life partner was a woman also known to Hastings.

The star debutante of the 1863 season, Lady Florence Cecilia Paget was the youngest daughter of the Marquess of Anglesey, recognised as a remarkable beauty, even praised by Queen Victoria herself for her grace and carriage.

Chaplin’s request for Lady Florence’s hand in marriage was accepted, prospective husband showered prospective wife with expensive jewels, and in June 1864 the announcement of the engagement was published in the Morning Post and The Times. Messages of congratulation flooded in, including one from the Prince of Wales, who rejoiced for his old Oxford friend, and a wedding in early August was planned.

By now Hastings had launched himself on the Turf, he owned the favourite for next year’s Derby in The Duke, and that seemed to provide the main focus of his life. But things soon went awry. The Duke was beaten twice at the Newmarket July meeting, his owner incurring heavy losses, a salutory lesson that racing was not as easy as he had imagined.

For July 15 Chaplin had booked a box at Covent Garden for a performance of Faust in which the celebrated Adelina Patti had a starring role. He suggested to his fiancée that they might invite Hastings; perhaps a spot of culture might prove a welcome diversion for their friend after his bad experience at Newmarket. Florence approved the plan, and the trio duly spent the evening together. They parted, and went their separate ways, the lady to a nearby hotel.

Next morning she hired a cab to take her to Marshall & Snelgrove, a fashionable Oxford Street store, which she reached at around 10am. Having entered by the front door, she made her exit from the back door and by midday had become the Marchioness of Hastings in a quiet ceremony at St George’s, Hanover Square.

One may well imagine the humiliation that the jilted Chaplin suffered. Invitations to the wedding had been sent out, and presents received. The new life he had planned, to begin in a matter of weeks, was suddenly not going to happen. Of course, he was inundated by messages of sympathy, and generally held to be the wronged party.

But to be embroiled in such a scandal, an episode that titillated an entire nation – it was the ultimate demeaning embarrassment. Had he never realised Hastings was a rival in love? Probably not. Had he ever imagined that the woman he loved would betray him so cruelly? Certainly not.

Chaplin was now desperate to find a diversion on which he could focus, and he found one in racing, which had long featured as a minor interest and now became his passion. And a small-scale operation was not what he had in mind, signalling his intentions by spending £11,000 on Breadalbane and Broomielaw, who turned out to be unsuccessful candidates for the 1866 Derby.

It was said that “he bought horses as though he were drunk, and backed them as if he were mad.” No doubt that was all about striving to gain revenge on his former friend; in time he would moderate his policy and act more sensibly.

In June 1865 Chaplin attended the annual sale of yearlings at William Blenkiron’s Middle Park Stud in Eltham, Kent. He bought six for a total of 4,730gns, including a colt by Newminster out of Seclusion for 1,000gns. A fanciful account of that occasion by Henry Blyth in his book The Pocket Venus is sheer fiction, and there is no contemporary evidence for his assertion that Harry Hastings was the underbidder.

Chaplin named his colt Hermit and put him into training with George Bloss in Newmarket. After a juvenile campaign which yielded four wins and two seconds, some regarded him as a Derby candidate.

Chaplin put his money where his mouth was; Hastings eagerly laid against him. In April he was never quoted higher than 11-1; in May, the Derby only a couple of weeks away, he burst a blood vessel and for most people became a no-hoper.

According to Edward Moorhouse’s version of events in his History and Romance of the Derby, Hermit was then “on the point of being scratched,” which I might have been inclined to believe, if my copy of that book had not previously been owned by Henry Chaplin. “Not a chance of it” was his pencilled remark in the margin.

But it was a fact that Hermit took a long walk in the market. Hastings was happy to lay the colt for big sums at higher prices, Chaplin content to take the longer odds.

On a day that brought freak episodes of snowfall on Epsom Downs before and after the race, Hermit was dismissed at 66-1. He got up close home to win by a neck from Marksman, the colt who had followed him into the ring at Blenkiron’s sale as a yearling. Chaplin won a fortune, and Hastings lost one. Some of the Hastings losses came in bets struck personally with Chaplin, who sportingly gave his rival time to pay.

By the following spring the moneylenders were into Hastings in a big way and only a Derby victory for his filly Lady Elizabeth could rescue him. He had no such luck and before 1868 was out, the woman he had stolen from his erstwhile friend was a 26-year-old widow. He died a thoroughly dissipated “old young man”.

Chaplin went on to become a member of the Jockey Club and be ennobled as a viscount. But even he had been forced to sell the ancestral home he had inherited. Hermit failed to win at four and five, his reputation shot. He stood for a fee of only 20gns in his first season at stud, but ultimately became renowned for seven sires’ titles.

Up Next
Believe in the American dream