The victory of Far Above in Deauville’s Listed Prix Kistena brought his sire’s tally of Group and stakes winners to seven. Nothing particularly exceptional about that I hear you say. But when you factor in the knowledge that Darley’s Farhh has had to contend with limited fertility, seven stakes winners takes on a greater significance. They have been produced from a pool of only 56 runners, which gives the son of Pivotal a strike-rate of 12.5% stakes winners to runners.

Not many stallions can achieve 10% stakes winners to runners given the large books covered these days. It is reserved for the very best, the handful that are the most sought after anywhere in the world. So, when a young stallion surpasses this benchmark, it’s time to sit up and take notice. Farhh’s first runners have just turned four and the significance of his achievements so far is the fact that only Galileo, Frankel, Dubawi and Starspangledbanner – among active sires – are ahead of him in the pecking order by this score.

Farhh didn’t run often, but when he did he was very consistent. He was never out of the first three in ten starts between the ages of two and five, winning five times. In fact, he was still unbeaten, albeit from just two starts, by the time he turned four, after a six-length maiden win as a juvenile and an impressive victory in a mile handicap at Newmarket at three.

During his four-year-old season he came up against some of the best racehorses in recent times, namely Frankel, Nathaniel, So You Think and Moonlight Cloud, but he always gave a good account of himself, running second in four Group 1s and third in another. It was as a five-year-old that he stamped his authority, winning the Group 1 Lockinge and the Group 1 Champion Stakes.

A full book for Farhh in his first season at Dalham Hall, where he stood for £17,500, was about 70 mares. It’s impossible to quantify how much breeders are put off by compromised fertility, but it’s probably safe to assume that it played a significant part in curtailing the quality of mare breeders have been prepared to send him in subsequent years.

Oddly enough, one of the last of Farhh’s progeny to become a stakes winner was his very best racehorse, the Timeform 124-rated Dee Ex Bee, who spent his Classic season competing very well in all the best races, including his second in the Derby. It wasn’t until this spring, with his victory in the Sagaro Stakes, that he became a stakes winner and he’s since added the Henry II Stakes and run second to champion stayer Stradivarius in the Gold Cup at Royal Ascot.

Farhh’s second most accomplished son in terms of Timeform ratings is his second-crop daughter, the 118-rated Move Swiftly, who took the Duke of Cambridge Stakes at Royal Ascot. Two others worthy of note are King Of Change, who chased home Magna Grecia in the 2,000 Guineas and earned a Timeform mark of 117, while Wells Farhh Go, his sire’s first juvenile stakes winner when taking the Acomb Stakes, returned after a long layoff with a Listed success at Newmarket – the scene of his win in the Bahrain Trophy as a three-year-old – a week before Far Above’s Deauville success. French Group 2 winner Nocturnal Fox is another first-crop success story.

One of the most impressive aspects of Farhh’s career has been his ability to get the most from his mares. His 12.5% stakes winners to runners was achieved from mares that score 7.1% with other sires. We can’t really criticise the quality of his stakes winners either: those with a Timeform rating have an average of 113.5, which compares favourably with some of the best sires around. His stud companion Dubawi’s 147 stakes winners, for instance, have an average rating of 114.7, much the same as Sea The Stars’ stakes winners.

These are very impressive numbers – some of which cannot even be matched by his sire’s red-hot Siyouni. For sure they are likely to settle down over time, but they still mark Farhh down as a sire with something about him. Given his momentum in the first half of the season, he’s bound to be on breeders’ shortlists in 2020 despite his fertility shortcomings. 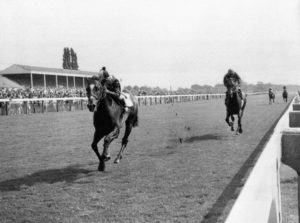 Up Next
Brigadier Gerard's perfect record goes up in smoke