From Johannesburg to Chile
Exclusive Columns

Too much focus on betting

Aside from his obvious talents as one of the nation’s leading trainers, Mark Johnston has a great gift for expressing articulate opinions in forthright fashion – and I doubt there could be any aspect of racing on which he has no opinion.

Readers of the excellent Kingsley Klarion, the monthly magazine which charts the progress of his Middleham stable, have never had to wonder why the column he pens appears under the heading: Straight Talking. He pulls no punches.

Johnston recently acquired a wider audience for one of his views, when he spoke out about the way the sport is portrayed on terrestrial TV. Blunt and, provocative as ever, he called for ITV to dispense with all coverage of betting, which he described as “ridiculous”, and appealed for more interesting material.

And he hoped his message would be heard by planners at ITV, which takes over as racing’s principal “shop window” at the start of 2017.

As was predictable, the reports of Johnston’s radical opinion produced plenty of reaction, most of it negative, and I have no doubt he’d have expected that to be the case. My initial amused response was to recall that time when we could hear racing results on the wireless, but Auntie BBC would never tell us the starting prices; betting was clearly the unsavoury aspect of the sport and it was not to be encouraged. 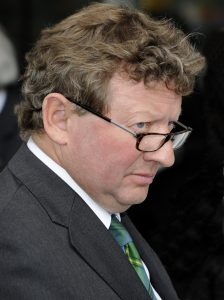 Mark Johnston: wanted to open a debate – and he did

I don’t suppose for one moment Johnston imagined anyone would entirely echo the view he expressed, and he would have known that coverage of racing with no mention of the betting angle was impossible in this day and age.

He was exaggerating to make a point, a ploy to which most people will resort at times, and one I have myself used on numerous occasions. Of course, if he had toned his message down, he would not have achieved the publicity and the impact he did. He wanted to open a debate, and he chose a surefire way to go about it.

It was no surprise that some of the most scathing criticism came from bookmakers. Nor was it a shock that some of the arguments advanced by bookmakers appeared to be totally irrelevant. Worse still, it struck me, was that some were almost certainly quite untrue.

Coral’s Simon Clare dismissed Johnston’s remarks as “beyond laughable” and reasoned that “as the majority of viewers have either placed a bet, or intend to, the coverage surely has to reflect that fact in the most compelling and relevant way possible.”

David Williams, of Ladbrokes, was quoted as saying: “Whether or not folk particularly like it, the primary attraction to the sport for the public is through betting.” He thought the idea of removing the betting element from coverage was “absurd.”

Asked for his slant on the issue, Jon Ivan-Duke of William Hill responded with a confident assertion that ITV would recognise that racing and betting had always been inherently linked and would reflect that fact in its coverage. And, like his industry colleagues, he added: “The vast majority of racing fans grow to love the sport through having a punt.”

Of course, the topic was bound to be referred to John McCririck, whose response proved as over-the-top and maddening as we came to expect from him in his TV heyday.

The storm in a teacup became a raging tempest as he thundered: “This is very serious and brings into stark relief the contempt that the upper classes who rule racing have always had for betting. If Mark Johnston had his way, racing would be run on private estates and nobody would care.”

As everyone ought to know, the aristocracy who invented organised racing did so primarily as a medium for wagering among themselves; they didn’t just condone betting, they fostered it and encouraged it.

Racing’s rulers have never held betting in contempt, and have always – now more than ever – recognised its importance to the sport. Not content with his rant over what Johnston did say, McCririck then chose to condemn him for something he did not say and never would say.

We should not forget that McCririck was once a bookmaker – albeit, by his own admission, a failed one – so we ought not to have been surprised when he echoed the thoughts of those quoted above, and even laid more stress on them. According to him: “At least 95% of people who watch racing on television or go to the sport have had a bet.”

Fine. I’ve had a bet. In nearly 60 years of going racing and watching races, I’ve had quite a few. But, relative to the number of races I’ve seen in all that time, ‘quite a few’ represents an accurate description. I once had an account with the Tote, but that got cancelled because I hardly ever used it. I honestly can’t remember when my last bet was struck.

What’s more, most of the people I mix with on the racecourse are not there because they like a bet. They attend for social reasons, to enjoy the spectacle of thoroughbreds in competition in the company of like-minded individuals.

Yes, they might have the occasional bet, but they don’t need to bet to find pleasure in going racing. It’s my contention that, aside from stable staff, few people professionally involved with racing would say that betting constitutes any kind of motivating factor in their enjoyment of the sport.

On terrestrial TV racing must be seen to be fun, like football or any other sport

But the TV viewer? Where is the evidence for the notion that a majority of those who tune into Channel 4 racing do so because they bet? Are we supposed to believe that so many thousands – shame we can’t say millions – have betting accounts and crave the up-to-the-minute market moves in order to make their investments every half an hour? Absolute poppycock.

Plenty will be watching just because there’s nothing much worth watching on BBC or ITV, and there will be those, like my mother, who found it undemanding viewing while she was doing the ironing, didn’t care who won, and cared even less about anyone’s opinion as to the likely winner. She quite liked seeing the actual races, though.

And that’s a significant point. Anyone chancing on Channel 4 Racing for the first time is more likely to be turned on to the sport and become a committed fan by the spectacle; the punditry and concentration on betting is all too baffling and esoteric for the newcomer.

The show should focus principally on presenting the races themselves to the best effect, encouraging the viewer to appreciate the sheer pleasure of watching horses and their riders in competition.

On terrestrial TV – and that is just what this argument is all about – racing must be seen to be fun, a branch of the entertainment industry, like football, tennis, cricket or any other sport. As Johnston correctly remarked, while betting features significantly in those pursuits as well, it doesn’t require frequent updates or regular mentions.

Nothing I’ve opined here, and everything opined by the bookmakers quoted above, applies to the dedicated racing channels of At The Races and Racing UK. The serious punters are subscribers, and I suspect that most subscribers are serious punters. They want, need and get up-to-the-minute betting information. It matters to them. It’s no big deal for Channel 4 viewers, and it will be no big deal for ITV viewers next year.

Up Next
From Johannesburg to Chile