Stars but no Caviar at Royal Ascot
Exclusive Columns

The story of The Tetrarch – the best juvenile of the 20th century – is particularly worth telling in his anniversary year; everything about this influential horse was phenomenal

This year marks the centenary of the birth of one of the most extraordinary horses in the history of thoroughbred racing and breeding. Unfashionably – even eccentrically – bred, and strangely marked, he was a two-year-old of exceptional merit, a champion sire and, despite being sub-fertile and retired early from stud duties, he wielded tremendous influence on the breed.

That phenomenon was The Tetrarch, whose rise to celebrity status in various areas was impossible to envisage when Edward Kennedy effected the hastily arranged liaison of Roi Herode and Vahren in the late spring of 1910. Kennedy, who owned the Straffan Stud in County Kildare, had been obsessed with the idea of reviving the apparently moribund male line of Herod and to that end had purchased a horse called The Victory from Australia, but in April 1909 he had died young and unsuccessful, so a replacement had to be found. Could there be a more aptly named substitute than Roi Herode?

A grey son of Le Samaritain from an excellent family, Roi Herode had been bred in France. Unraced at two, he ran nine times at three for a single victory, but managed four seconds, including in the Prix du President de la Republique and the Prix Royal Oak. At four he won the Grand Prix de la Ville de Vichy and was second in his only other start in France. He made one trip to England for an unsuccessful shot at the Derby Gold Cup.

As a five-year-old Roi Herode ran in both England and France again, notching his only win in the Prix de la Table over 15 furlongs at Chantilly before a second in the Doncaster Cup and failure as favourite for the Newbury Autumn Cup. Kennedy paid £2,000 for him, but was bound to acknowledge that his new acquisition needed a higher profile if he were to earn a proper chance as a stallion, so he determined to keep him in training at six.

The Chester Cup was the first aim, but not long before it Roi Herode broke down irreparably. It was already nearly three months into the breeding season and Kennedy had no chance of attracting many outside mares, but he did have a couple due to foal late himself, one being Vahren. A 13-year-old daughter of Bona Vista bought for £200, she had won three minor races and though she failed to produce a live foal until 1908, that was Nicola, a filly by Symington who had recently won the valuable Sandown Park Stud Produce Stakes on her debut. Vahren might as well take her chance.

At birth the product of that union appeared to be chesnut, marked with black splotches, but it soon became clear he was a grey and the splotches turned white. The colour scheme was odd, but a practised horseman could see beyond that and when Kennedy sent the colt to the 1912 Doncaster yearling sales he knew that for make and shape there would be few to match him. He also had a good idea who would buy him.

Persse loosens purse strings
Stockbridge trainer Atty Persse had trained Nicola. He had also taken charge of Roi Herode after his purchase by Kennedy and, although he had never got him on a racecourse, had formed a high opinion of his merits. On a visit to view the Straffan yearlings, Persse was impressed by the Roi Herode-Vahren colt and determined to bid for him at Doncaster. One wag at the sale dubbed the colt “the rocking horse” because of his odd markings, but Persse was not the only judge to admire him and he had to go to 1,300gns – a respectable sum for the son of an untried sire – to fight off the competition.

The trainer soon found a client in his cousin and patron Dermot McCalmont, passing the colt on at cost price, and the 1913 season had barely begun when he was able to assure the owner he had a bargain.
On April 3 Persse staged a gallop for four two-year-olds who were nearly ready for a race and at the last minute decided that The Tetrarch, with whom he had done very little, might as well go along. The lad riding him was instructed not to move on him and to let him drop out when the others left him.

Persse was astonished to see The Tetrarch way out in front after two furlongs, just cantering and trying to pull the boy out of the saddle. Could he believe what he had seen? He had to know, so summoned Steve Donoghue for a leg up on the colt two days later in a formal trial over five furlongs. The useful seven-year-old handicapper Captain Symons was the trial horse, at level weights with The Tetrarch, who should have been entitled to a concession of 3st 5lb weight-for-age. The young one won, pulling up, in a canter. A week later Persse set The Tetrarch to give Captain Symons 14lb over the same five-furlong trip. The outcome was the same.

There was no longer room for doubt that The Tetrarch was exceptional and what followed on the racecourse proved it. He won a 21-runner Newmarket maiden by four lengths on his debut, took the Woodcote Stakes at Epsom by three, then trotted up by ten in the Coventry Stakes at Royal Ascot. He had a close call in the National Breeders’ Produce Stakes at Sandown Park, having been backing away from the tapes when they rose and losing a lot of ground, but he came home like a rocket to win by a neck, giving 17lb to the runner-up.

It went on. At Goodwood he won the Rous Memorial Stakes by six lengths, giving the next year’s dual Classic winner Princess Dorrie 13lb, the Champion Breeders Foal Stakes by four lengths, and the Champagne Stakes at Doncaster by three lengths. His season was not meant to end there, but on the day before his intended start in the Imperial Produce Stakes at Kempton he rapped his off-fore fetlock joint. That was that.

No doubt who should be top
How good a two-year-old was The Tetrarch? The handicapper of 1913 ranked him 10lb higher than second-best Corcyra, the Middle Park winner; that margin was unprecedented. When John Randall and I came to rate the best juveniles of every year in the 20th century, we had no doubt he should be top. Nearest to him, 1lb behind, were Tudor Minstrel and The Tetrarch’s own son Tetratema.

What manner of racehorse The Tetrarch would have been after the age of two we can only guess. On public form we know that he was an exceptional two-year-old at sprint distances, but would there have been more to him than that? Persse felt he was not quite ready for the Guineas, but afterwards regretted he had not let him run, believing “he would have won in a trot.”

The colt was said to have gone well in a mile and a half gallop in May, prompting his trainer to suggest he was unbeatable at any distance, but soon after a recurrence of the old injury ensured that he never raced again.

The Tetrarch’s stud career proved as extraordinary as his innings on the track – and for more than one reason. He appeared to have little interest in sex, never had a crop larger than 23, and in four years the tally was in single figures. He sired only 130 foals in total and for the last ten years of his life was sterile. Yet he was champion sire when his first runners were only three and twice reached third place. Persse’s insistence that he was more than a sprinter was lent some credibility through three St Leger-winning sons in Caligula, Polemarch and Salmon-Trout.

But the real celebrities among his progeny were his speedier representatives: Tetratema, a champion in each of his three seasons, and Mumtaz Mahal, the flying filly who proved best of her sex at two and three. Both played significant parts in ensuring that, despite his want of normal procreative powers, their sire became a staple ingredient of the breed, a factor – generally many times over – in the pedigree of every thoroughbred in this centenary of his birth. 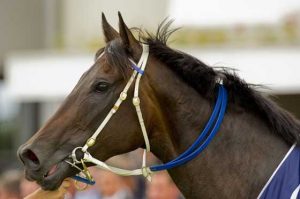 Up Next
Stars but no Caviar at Royal Ascot