Too soon to write off young stallions

As I am reaching an age at which I should occasionally be forgiven for repeating myself, excuse me for recycling some advice I once gave readers of my TDN column.

I told them that the last few lines of the 1962 British comedy song ‘Right Said Fred‘ contained some valuable advice for any novice in the racing and breeding industry:

“You see the trouble with Fred is he’s too hasty
Now you never get nowhere if you’re too hasty.”

What I had in mind was the tendency for people to leap to conclusions regarding the merits of young stallions. Some start to have their ability questioned before they have even had a runner, especially if they are deemed not to be stamping their stock. Others are written off on the scant evidence of their first batch of two-year-olds.

I must admit I was one of the doubters. I had been underwhelmed by the exploits of his first juveniles, even though they earned their sire a distant second place behind Iffraaj among 2010’s first-crop sires. The main source of my disappointment was that Holy Roman Emperor had come up with only one stakes winner in High Award, winner of the Listed Woodcote Stakes. I had expected much more from a first crop which numbers 114 foals, as Holy Roman Emperor seemed ideally qualified to make the grade as a stallion.

For a start, he is by a recognized sire of sires in Danehill, sire also of Danehill Dancer, Dansili, Redoute’s Choice, Rock of Gibraltar, etc. Nor was there any fault to find with his female line. Holy Roman Emperor is a grandson Fanfreluche, a champion daughter of Northern Dancer. Fanfreluche’s brother Night Shift had proved a wonderful surprise as a stallion, siring a long line of stakes winners headed by performers of the quality of Azamour, In The Groove, Daryaba and Lochangel. The family’s standing as an excellent source of successful stallions had also been well advertised in Australia by the champion sires Encosta de Lago (whose fourth dam is Fanfreluche) and Flying Spur (third dam Fanfreluche). As Flying Spur is also by Danehill, his achievement of siring more than 40 Group winners was surely a strong sign that Holy Roman Emperor would flourish as a stallion.

Then there was Holy Roman Emperor’s own racing record. Forward enough to make a winning debut on June 7, he gained his first Group success as early as July 2. He raced only at Group 1 level thereafter, winning the Phoenix Stakes and Prix Jean-Luc lagardere in addition to finishing second to Teofilo in both the National Stakes and the Dewhurst. There was only a head between the two at Newmarket.

This established Holy Roman Emperor as Coolmore’s best chance of winning the 2007 2,000 Guineas and he was second favourite behind Teofilo when the shock announcement came on March 11 that he had been retired. He was whisked away from Ballydoyle to substitute for the struggling George Washington at Coolmore.

I always wondered whether this decision reflected fears that the diminutive colt lacked the physical scope to stay ahead of the game as a three-year-old. Even now he is listed as standing no more than 15.2½ hands. But what he lacks in height he more than makes up for in strength, being a muscular, robust individual who could be described as a pocket Hercules. Kieren Fallon once described him as being built like a tank.

Despite his lack of height, Holy Roman Emperor showed fairly constant progression at two and I am beginning to think he might have continued to improve had he remained in training at three. His first foals certainly seem to have flourished from two to three.

His daughter Banimpire has stepped up significantly on her four juvenile starts by defeating highly regarded colts in the Gr.3 Ballysax Stakes and then winning a Listed race. Sandslash, a filly who didn’t race at two, is making up for lost time, winning her first three starts including the Gr.3 Premio Carlo Chiesa. And then Imperial Rome, a colt who won only a Dundalk maiden in the November of his two-year-old campaign, has returned to win a handicap by five lengths and then the Listed Tetrarch Stakes. Another improver at a lower level has been the all-weather filly Chevise, winner of six of her last seven starts, including four wins at three.

Banimpire, Sandslash and Imperial Rome may provide some insight into why these Holy Roman Emperors are shining at three, rather than two. Breeders inevitably tend to send big mares to small stallions and my experience has been that these big mares are likely to produce big foals, whatever the size of the stallion. Banimpire is out of a mare by the 17-hands Kris S.; Sandslash’s dam is by the tall Lycius, who stood 16.2½; and Imperial Rome is out of a daughter of Revoque, a 16.2-hands individual whose broodmare sire Lafontaine stood nearly 17 hands.

I wouldn’t be surprised if Holy Roman Emperor’s second crop makes a bigger impact at two than its predecessor. This crop much bigger, at 157 foals, and some of them also have somewhat earlier foaling dates.
Azamour a victim of fashion
An example of a young stallion whose popularity slumped before he had even had a runner is Azamour. After producing a first crop numbering 101, this champion son of Night Shift started to struggle. His second crop was roughly half the size (52 foals) and his third was even smaller, at 32 foals from a book of 47 mares. It appears to have been a similar story in that oh-so-difficult fourth season, with approximately 37 foals from a book of 52.

These figures underline how much fashion dictates breeders’ decisions. In the year that Azamour covered 47 mares, we saw the likes of Acclamation, Cape Cross, Dylan Thomas, Elusive City, Galileo, Holy Roman Emperor, Kheleyf, Manduro, Oasis Dream, One Cool Cat, Oratorio, Red Clubs, Rock of Gibraltar and Teofilo all cover books of at least 150 mares and some as many as 206.

It’s hard to understand why Azamour lagged so far behind, apart from the fact that he was at a potentially dangerous stage of his career for commercial breeders. There was little fault to be found with his racing record. An unbeaten Gr.2 winner at two, he went on to win the St James’s Palace Stakes and Irish Champion Stakes at three and then the Prince of Wales’s Stakes and the King George at four. In other words, he was a Gr.1 winner over eight, ten and 12 furlongs, showing a rare blend of class and versatility.

Perhaps Azamour has suffered for being a son of Night Shift, but this son of Northern Dancer worked his way through the ranks as a stallion to end up with a total of nearly 100 stakes winners. None of Night Shift’s previous sons had been given much of a chance as a stallion, but the Gr.3 winner Dyhim Diamond has excelled himself by siring the French Gr.1 winners Turtle Bowl and Bannaby and Nicolotte sired a handful of Listed winners.

Azamour has already proved that he deserved stronger support than he sometimes received. His first crop contains the Group winners Eleanora Duse, Azmeel and Puncher Clynch, plus Group-placed performers in No Explaining (in North America) and Wade Giles (now racing as Destined For Glory in Hong Kong). This crop also contains Zarkandar, a dual Gr.1 winner over hurdles, and Third Intention, runner-up in a Gr.2 hurdle.

Significantly, the considerably smaller second crop is proving similarly fruitful, with the 2,000 Guineas third Native Khan and the German colt Lindenhalter winning at Group level. The Irish filly History Note and the Irish colt Mawaakef have also been Group placed, while the fillies Zoowraa and Siren’s Song have won Listed races to take this crop’s total of stakes winners to four. Azamour’s second crop also includes Loving Spirit, who was considered good enough to take his chance in the 2,000 Guineas. 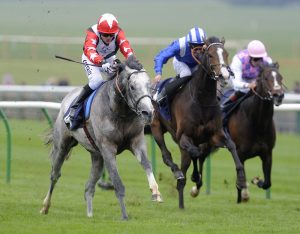 With no inbreeding in his first five generations, Azamour is out of a mare free of Northern Dancer, so he must be an option for breeders looking for a stallion with comparatively little Northern Dancer blood. However, four of his first five Group winners are out of mares from other lines. Their broodmare sires are King’s Best and Vettori (both from the Mr Prospector line), Kendor and Rainbow Quest, the exception being Northern Dancer’s grandson Caerleon.

Fortunately, Azamour’s good early results haven’t gone unnoticed. He covered around 140 mares in 2010 and is sure to have been popular again this year. Sir Robert Ogden went to 315,000gns at the Craven Breeze-Up Sale to secure a colt from Azamour’s small third crop, which also included a 240,000-guinea yearling filly, so the future is now looking much brightest for this ten-year-old stallion.