Sunbittern a key to Dubawi

Space Blues is now the fifth winner inbred to the mare

The idea of inbreeding back to influential mares, commonly known as the Rasmussen Factor, has held a steady presence at racing’s top table since the sport resumed from its enforced hiatus.

Chief among them has been the Irish Oaks heroine Helen Street, who appears twice (3×3) in the background of Poule d’Essai des Poulains hero Victor Ludorum (by Shamardal).

Inbreeding to Special, which has been shown in a good light by the Kingmambo – Sadler’s Wells partnership, remains popular while Kingmambo himself has become an important component in the increasingly notable pattern of inbreeding to Miesque, which is currently in play behind Kentucky Derby hopeful Sole Volante (by Karakontie).

Inbreeding to Sorbus reared its head again on Saturday through the Grade 2 Yellow Ribbon Handicap winner Bodhicitta. Another high-class Showcasing filly bred at Lord Margadale’s Fonthill Stud in Wiltshire after the Prix de la Grotte winner Tropbeau, Bodhicitta finished with a real rattle to deny the Irish-bred Tonahutu by a nose in the Del Mar event and earn her first stakes win. A direct descendant of Sorbus, Bodhicitta is one of five stakes winners inbred to the daughter of Busted from 43 named foals. Another is the Kingman colt Fox Chairman, last year’s Steventon Stakes winner who looks primed for another stakes victory judged on his recent second in the York Stakes.

If the idea of inbreeding to Sorbus is an emerging pattern, then the reinforcement of Sunbittern has long been regarded as a successful route for anyone in the privileged position of being able to use Dubawi.

For example, pairing Dubawi with Singspiel – the best sired by Sunbittern’s grandson In The Wings – has produced Too Darn Hot alongside his classy sisters Lah Ti Dar and So Mi Dar, Left Hand, Wuheida, Old Persian, Rare Rhythm, Laugh Out Loud and Majestic Dubawi. Another son of In The Wings, Irish Derby winner Winged Love, is the damsire of German Group 3 winner Kapitale. For all that several are out of top mares – Too Darn Hot and his siblings are out of Watership Down Stud’s outstanding mare Dar Re Mi and Wuheida is a daughter of Fillies’ Mile heroine Hibaayeb – it’s still a powerful list for a cross that is responsible for just 41 foals and 30 runners.

Dubawi’s latest Group 1 winner, Sunday’s Prix Maurice de Gheest hero Space Blues, does not advertise the cross, instead being the product of a high-class Noverre mare in Miss Lucifer. Yet as a descendant of Sunbittern herself, he is nevertheless a member of this high-flying group. Indeed, he becomes the fifth Group 1 winner to be inbred to the mare, all of whom are by Dubawi. The aforementioned Too Darn Hot, Left Hand, Wuheida and Old Persian complete the quintet.

Foaled in 1970, Sunbittern was bred by Elizabeth Burke’s Stackallan Stud in Country Meath out of Pantoufle, a winning relation to Irish Derby winner Fidalgo. A daughter of the Herbager stallion Sea Hawk, Burke campaigned Sunbittern with Bruce Hobbs to win three races and run fourth in the Cheveley Park Stakes as a two-year-old, in which she ran on well behind stable companion Jacinth despite losing several lengths at the stud. Unfortunately, temperament issues then got the better of Sunbittern at three, with the filly going as so far to refuse to race on one occasion.

At stud, however, Sunbittern’s class shone through. Ten off her 11 runners won led by High Hawk, one of the first really good fillies to be campaigned by Sheikh Mohammed. Tough yet highly progressive for John Dunlop, High Hawk’s three-year-old campaign in 1983 ranged from a spring Folkestone maiden to victories in the Ribblesdale, Park Hill, Prix de Royallieu and Premio Roma – not bad for a filly who had cost 31,000gns as a yearling. And at stud, the daughter of Shirley Heights would go on to gift Sheikh Mohammed with his Breeders’ Cup Turf and Coronation Cup hero In The Wings, later a significant sire at Kildangan Stud, alongside the Group 2-winning colts Morozov and Hunting Hawk.

Sunbittern’s progeny subsequently became prized commodities. There was her High Line daughter High Tern, a foal of 1982 who sold for 420,000gns as a yearling before winning a Warwick maiden and a Thirsk handicap. In 1996, she wound up selling for just 6,500gns to Kern/Lillingston Association and was dispatched to Saudi Arabia, leaving behind a yearling colt by High Estate; he turned out to be Derby winner High-Rise, who secured his Classic highlight in June 1998 for Luca Cumani just days after the victory of his relation and stablemate Zomaradah – a Deploy granddaughter of High Tern – in the Oaks d’Italia.

Of course, Zomaradah is better known today as the dam of Dubawi.

Space Blues descends from Sunbittern on his female side via High Hawk’s younger sister High Spirited.

Burke retained High Spirited to race and although she was nowhere near as talented as High Hawk, Dunlop did manage to get two wins out of her at up to two miles.

As that record shows, this family has long reacted well to opportunities with middle-distance Classic influences. Thus, the decision to send High Spirited to top sprinter Cadeaux Genereux in 1995 marked a very different approach. The resulting foal was Devil’s Imp, a 210,000gns yearling purchase by Gainsborough Stud Management who went on to win two of four starts for Ed Dunlop, one of which was a two-runner event on debut at Newmarket.

Devil’s Imp retired with a rating of only 67 and left behind just one runner of note in Miss Lucifer, who sprang a 20-1 surprise in the 2007 Challenge Stakes having progressed through handicaps for Barry Hills. Now the daughter of Noverre is fuelling the trajectory of this family.

Space Blues is the fifth foal out of Miss Lucifer and the second to hit a high note after the Elusive Quality filly Shuruq, a multiple Group 2 and Group 3 winner for Godolphin in Dubai and Turkey. In what has been a recent purple patch for the family, Shuruq is also the dam of last month’s Coaching Club American Oaks third Antoinette (by Hard Spun).

Dubawi currently sits in fifth on the leading European sires table, sandwiched between Dark Angel and Kodiac, neither of whom stood for more than €60,000 in 2016, the year this current crop of three-year-olds were conceived.

A straight reading of the table does not do Dubawi justice, however, since Space Blues is his third Group 1 winner of the year after Ghaiyyath and Lord North. He also continues to strengthen his position as an influential sire of sires via the deeds of Night Of Thunder and New Bay, both young stallions supported by strong statistics.

All of which adds fuel to Space Blues’ appeal as a stallion prospect that is already underpinned by victory in a 7f Group 1 and a powerful family. In addition, his background contains no Sadler’s Wells or Danehill blood, a rarity in today’s world. 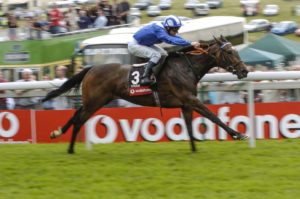