Owners deserve every bit of help they can get
Exclusive Columns

We read a lot these days about how racing should set about safeguarding its future by recruiting a younger fan base. I confess I know of no master plan for furthering that cause, and can only reflect on the fact that I hail from L.P. Hartley’s foreign country, the past, where things were done differently.

Aged 11, I spent a shilling on the 1956 News Chronicle Racing Annual at a station bookstall, and my life was never to be the same again. I was hooked, virtually from the moment I opened that book, and by the time I’d reached my destination I was eager to learn more about the most fascinating subject I’d ever come across.

Like most kids I had to have heroes, and my first in the equine line was sorted when, aged 12, I found a cheap second-hand copy of Bob Lyle’s biography of Brown Jack, the immensely popular stayer who won at six consecutive Royal Ascots in the years between the wars. Why shouldn’t a horse take rank alongside such as Stan Matthews, Denis Compton and Jim Laker in my pantheon of sporting greats? His was a romantic tale, and it led me to seek out other inspiring equine subjects. 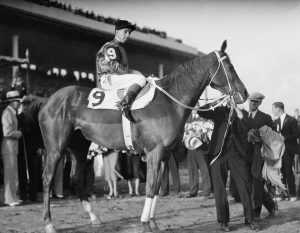 It didn’t take me long to appreciate that racing was a global sport and that every nation had special champions who had become part of its sporting folklore. I lapped up all I could find on those equine celebrities from foreign parts, like Man o’ War, who had acquired something akin to legendary status in America, French-bred English Triple Crown winner Gladiateur, and Kincsem, that amazing Hungarian mare who had never been beaten in 54 starts all over Europe.

And, no less distinguished than those superstars, there was the gelding to whom two nations laid a claim. Phar Lap was the best horse ever bred in New Zealand, and just as obviously the best ever trained in Australia. He merited those accolades when I ‘discovered’ him 60 years ago, and he still rates as number one in both respects 90 years after his birth on NZ’s south island on October 4, 1926.

Everything about Phar Lap was out of the ordinary, not least his breeding, as his sire Night Raid had raced exclusively in selling company as a two-year-old, failing to win in six efforts. His last outing was at Warwick, where he finished a poor fourth under Harry Wragg, carrying 6st 12lb. Under three weeks later he was sold for 120gns at the 1920 December Sales and sent to New Zealand, stopping off en route in Australia, where he won one minor race and dead-heated in another.

Phar Lap was consigned as a yearling to the Trentham Sales in Wellington in 1928. Australian trainer Harry Telford liked his catalogue page and instructed his NZ-based brother Hugh to bid up to 190gns for him, intending to pass him on to his client David Davis, an American businessman; in fact, 160gns was sufficient to secure him. As it turned out, Davis did not like the look of the colt when he arrived in Australia and declined to pay for his training. Telford, still keen on the purchase, agreed to train the horse for nothing in return for two-thirds of any earnings.

The idea of earnings might have seemed fanciful when the now gelded Phar Lap finished last on his racecourse debut, and after three more efforts as a two-year-old had still failed to reach the first three. But his initial season finished on a brighter note with a half-length victory in a maiden handicap.

His three-year-old campaign began inauspiciously with four unplaced outings, but Telford retained belief in his charge and had him entered in numerous high-class races. His judgement was sound. After a promising second in the Chelmsford Stakes at Randwick, Phar Lap rattled off four consecutive wins, including the Sydney and Melbourne Derbys, performances that led to his starting even-money favourite for the Melbourne Cup. The gelding was not quite up to that calibre yet, finishing third, and he filled the same position in the St George Stakes on his reappearance after a three-month break.

Best yet to come
The rest of his three-year-old season proved a total triumph – nine wins in as many starts between March 1 and May 17, including the St Legers in Melbourne and Sydney. But Australia still had not seen the best of Phar Lap, who ruled as the nation’s dominant performer at both four and five.
He had 16 starts as a four-year-old, finishing second in the first and last of them, and winning everything in between.

The sixth race in that sequence was the Cox Plate, and he followed that with four successes in eight days at the Flemington spring carnival – the Melbourne Stakes, the Melbourne Cup (under top weight of 9st 12lb), the Linlithgow Stakes and the C.B. Fisher Plate. He dominated at all distances from a mile to two miles, his winning margin never less than three lengths.

Phar Lap won his first eight races as a five-year-old, including a second Cox Plate, but the handicapper defied him to add a second Melbourne Cup, allotting him the huge burden of 10st 10lb. He finished eighth, while the winner White Nose carried 6st 12lb.

By now Telford and Davis were equal partners in the gelding, whose career record showed 36 wins from 50 starts. Having established his overwhelming supremacy in his adopted nation, it was time for a fresh challenge in the Agua Caliente Handicap, billed as the richest race in the world, at Tanforan in Mexico. Phar Lap travelled there via the country of his birth, where he was rapturously welcomed as a returning hero.

The visitor was done no favours by the Tanforan handicapper, being set to concede between 9lb and 39lb to ten rivals over the ten-furlong trip, but he trounced them in course record time, darting from last to first in a matter of strides and easing down to register a two-length victory.

Where were the fresh worlds to conquer now? Discussions were ongoing about the gelding’s next venture, but they were brought to an abrupt halt 16 days after the triumph in Mexico when he died, evidently in excruciating pain, in the California paddock chosen for his rest and recuperation. The news of the champion’s demise naturally caused shockwaves throughout the racing world, most especially in Australia and New Zealand, where conspiracy theories were readily bandied about. What could have caused the death of a horse as renowned for the toughness of his constitution as for his brilliant performances on the racecourse?

Speculation over the tragic event that occurred in April 1932 has never ceased, and while it is generally accepted that poison played a part, just how he came to ingest it continues to defy convincing explanation.

Of course, premature death, in whatever circumstances, tends to add to the legend of the famous victim – think Mozart, James Dean, Marilyn Monroe and countless others – and I don’t doubt that Phar Lap’s cruel end, when evidently at the peak of his powers, was a factor in my adopting him as one of my special equine heroes nearly 60 years ago.

My visit to New Zealand earlier this year was supposed to be largely about visiting relations and old friends, while exchanging a chunk of England’s winter for a slice of southern hemisphere summer, but there were always going to be excuses for paying homage to the great horse who helped to fire my passion for racing as a kid.

One port of call had to be the Te Papa Museum in Wellington, where Phar Lap’s skeleton is the number one attraction among thousands of exhibits that celebrate the rich history of New Zealand. And while I might have taken any one of several routes to explore the south island, a visit to Timaru, where Phar Lap first saw the light of day, had to feature.

The kind curator of the local museum there pointed me in the direction of two sites where the town’s most celebrated former resident was commemorated. One, on the property where the horse was foaled, could hardly have been more disappointing. It was hard enough to recognise the image displayed there as any kind of horse, let alone a thoroughbred champion, but the bronze statue that decorates the entrance to the local racecourse does full justice to my hero, depicting the gelding in glorious action.

I’d like to think that 21st century kids might fall in love with a racehorse, as I did all those years ago, but the world is such a very different place now.

Up Next
Owners deserve every bit of help they can get