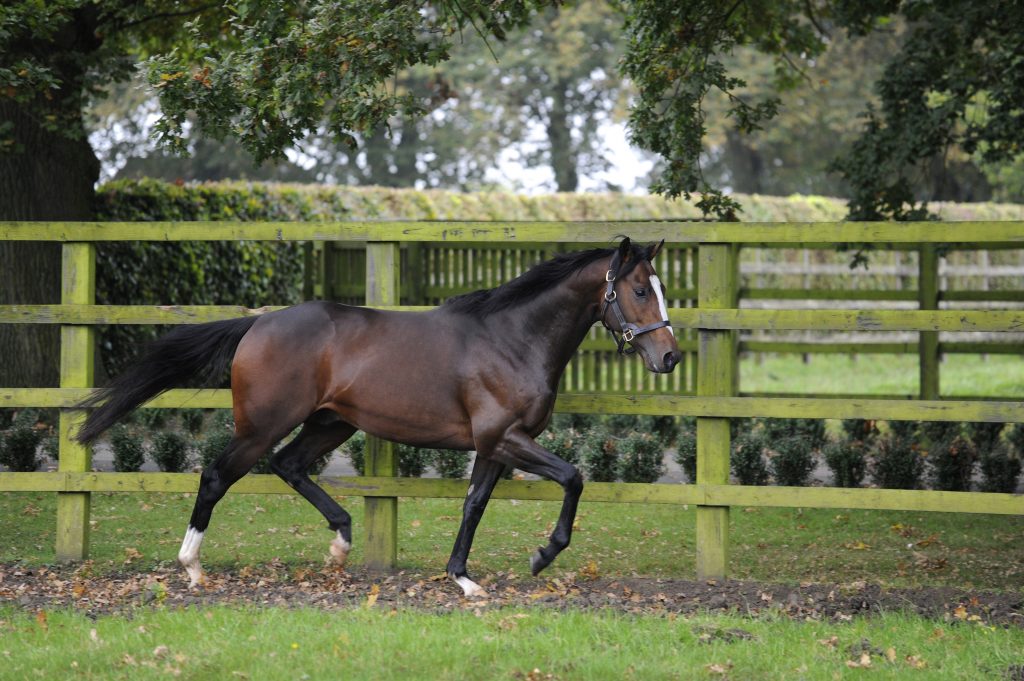 Intello is by Impressionante, a half-sister to Shaman’s Listed-winning dam Only Green – Photo: George Selwyn

Fall Aspen’s standing as one of the great broodmares of the post-war era is perhaps best summed up by the $2.4 million paid for the mare by John Magnier at the 1994 Keeneland November Sale.

Fall Aspen walked into the ring in foal to Danzig at the advanced age of 18, very much in the twilight of her stud career. Yet here was one of those rare jewels who had rarely missed, firstly for Spendthrift Farm, then under the management of Brownell Combs, and then for International Thoroughbred Partners.

The daughter of Pretense had been a high-class race filly for breeder Joseph Roebling, winning the 1978 Matron Stakes, and by the time of her sale, had foaled four Group/Grade 1 winners including the Grand Prix de Paris winner Fort Wood and July Cup winner Hamas. However, crucially with regards to the mare’s value as an older producer, the quartet also included Timber Country, winner of the Breeders’ Cup Juvenile just two days before her date at Keeneland.

Timber Country went on to win the following year’s Preakness Stakes while her 1993 colt, Prince Of Thieves (one of the best runners sired by the disappointing Hansel), ran third in the Kentucky Derby. As for the Danzig colt she was carrying at the time of her sale, he turned out to be Diadem Stakes winner Bianconi, the best of three foals produced for Magnier prior to the mare’s death in 1998.

Today, as no doubt envisaged at the time of her sale, Fall Aspen’s influence has come to span the globe.

For the most part, however, much of its current activity stems from Elle Seule, Fall Aspen’s second foal who won the 1986 Prix d’Astarte for David Smaga.

The daughter of Exclusive Native was a key element in Shadwell’s success during the 1990s as the dam of champion sprinter Elnadim and Mehthaaf, the champion three-year-old filly in Europe of 1994 by virtue of her wins in the Irish 1,000 Guineas and Celebration Mile. In turn, Mehthaaf bred Italian champion Najah and is the third dam of champion miler Ribchester.

Today, Fall Aspen’s influence has come to span the globe

Now the Elle Seule clan has another potential Group 1 performer to its credit in Shaman, who justified favouritism to take Sunday’s Prix la Force for trainer Carlos Laffon-Parias at Longchamp. Previously successful in the Prix Omnium II at Saint-Cloud, the Wertheimer et Frere homebred is progressing swiftly and only had to be pushed out by Maxime Guyon to score by a comfortable neck from Rockemperor.

In the process, he formed the first leg of a Group 3 race double for the Wertheimers, who were represented later on the card by Prix Vanteaux winner Platane, a Le Havre filly from their famous Goldikova family.

This branch of the Fall Aspen family has been in the hands of the Wertheimer brothers for the best part of 30 years, stemming from their acquisition of Only Seule, the first foal out of Elle Seule and therefore produced before her $1.5 million sale to Shadwell.

Foaled in 1988 and bred by Cormal Investment Inc, the daughter of Lyphard made only four starts during her sole season of racing at two but there’s no doubt that she had ability, as a maiden win during Deauville’s summer meeting attests. And she duly became an important part of the Wertheimer band as the dam of nine winners, led by the Prix de la Foret and Prix Maurice de Gheest heroine Occupandiste.

In turn, that daughter of Kaldoun has fleshed out the family further as the dam of Mondialiste, the Arlington Million and Woodbine Mile winner who is currently serving his second season at Elwick Stud, and Impressionante, the Prix de Sandringham winner whose second foal was none other than Intello; the Prix du Jockey-Club hero has made a bright start to his own stud career as the sire of eight first-crop stakes winners, led by Intellogent and Young Rascal. 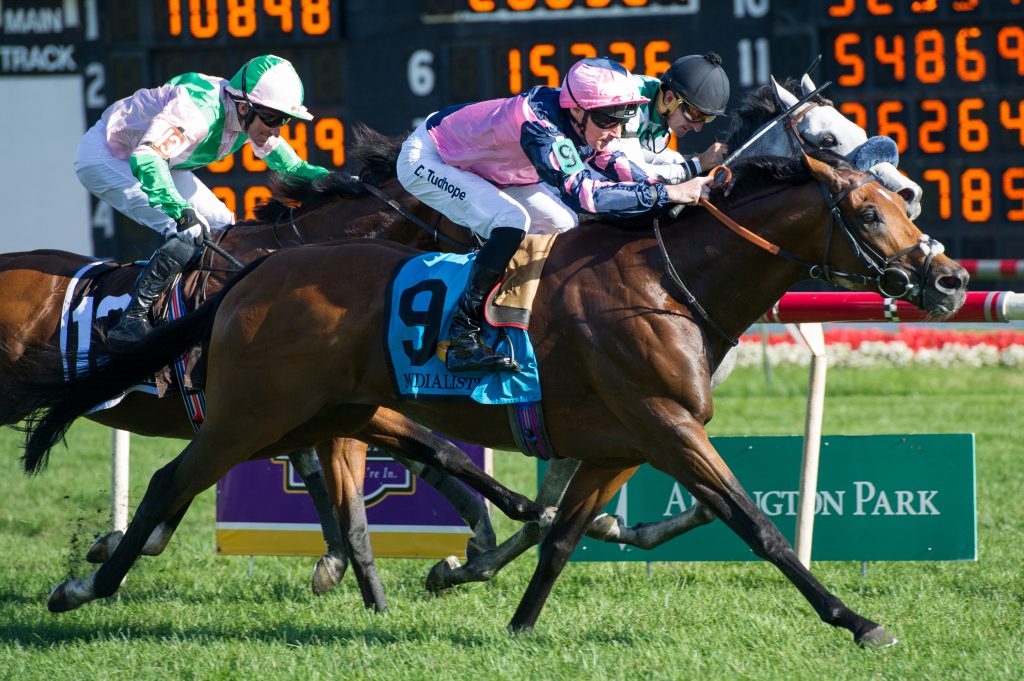 Mondialiste is out of Occupandiste, a daughter of Only Seule, and is serving his second season at Elwick Stud this year

The exploits of Intello and Mondialiste have placed the spotlight firmly on Occupandiste in recent years but in the case of Shaman, it shifts to her Listed-winning half-sister Only Green. Best over seven furlongs, as she showed when successful in the 2009 Prix de Saint-Cyr and Prix du Pont-Neuf for Freddy Head, Only Green got off to a swift start at stud when her first foal turned out to be Green Sweet (by Smart Strike), winner of the 2015 Prix Omnium II. In Shaman, however, she appears poised to hit much greater heights.

The Kildangan Stud stalwart has previous form with the Occupandiste family via the 2015 Prix Eclipse winner Sasparella, to date the best foal out of Only Green’s three-parts sister Desertiste (by Green Desert out of Occupandiste).

It is also worth noting that one of Shamardal’s best sons, Mukhadram, remains one of only three Group 1 winners out of a Timber Country mare.

Now 17, Shamardal has stood for Darley in a private capacity since 2016, although a select number of nominations have reportedly been opened up for 2019. The son of Giant’s Causeway is a remarkable stallion. Each of his nine crops aged four and above have contained at least one Group 1 winner; dual French Classic hero Lope De Vega was the star act of his first crop and has since been followed by the likes of Casamento (foaled 2008), Mukhadram (2009), Dariyan (2012), Pakistan Star (2013) and Blue Point (2014). 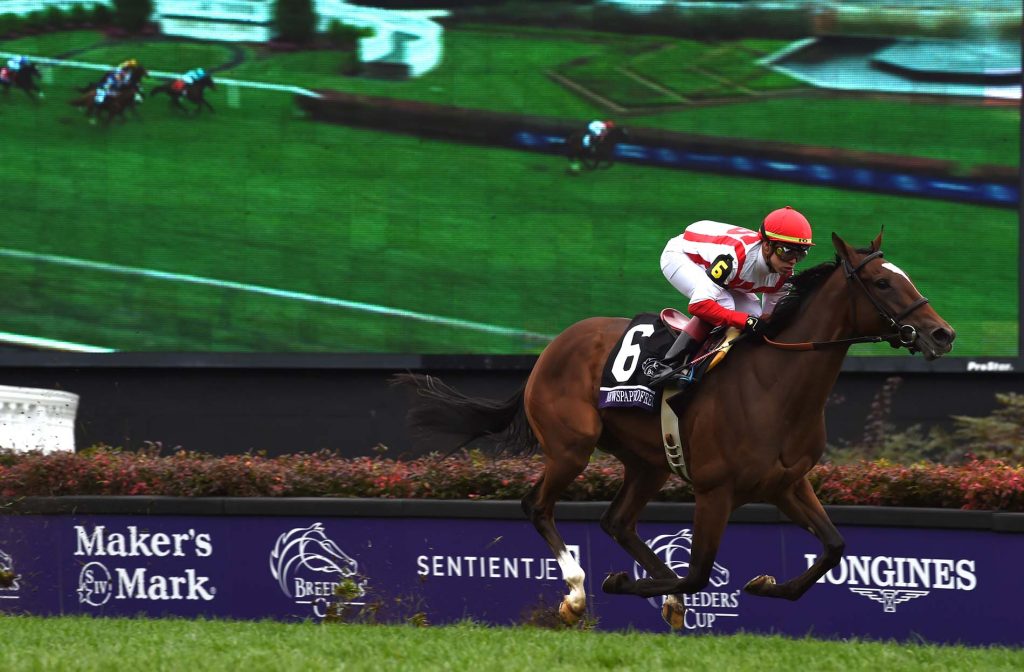 Of course, Lope De Vega is himself now developing into an important international influence for Ballylinch Stud. With the likes of Newspaperofrecord and Phoenix Of Spain, not to mention Waverley Racing’s intriguing quartet of Antonia De Vega, Dancing Vega, Feliciana De Vega and Manuela De Vega, among the three-year-olds to race for him this year, he looks poised for an excellent season.

It should also pay to keep an eye on Mukhadram given his first three-year-olds contain a serious American turf filly in A Bit Special and the well regarded Jahbath.

In the meantime, it would be no surprise to see Shaman acquit himself well when he steps up to Group 1 level. He holds an entry in the Prix du Jockey Club but while he saw the 9f out well on Sunday, it also seems that trainer Carlos Laffon-Parias is content with the idea of bringing him back to a mile for the Poule d’Essai des Poulains.

Up Next
Nicholls still chasing gold after surviving tough times