Sons No Nay Never, Sioux Nation and Justify are among those to have enjoyed a productive week

It had just been announced that Scat Daddy would command a six-figure fee for the following season when he died in December 2015, having collapsed at Ashford Stud in Kentucky.

For all those associated with him, it was a cruel twist of fate. Aged only 11, Scat Daddy had enjoyed one of his bestseasons that year, with the two-year-old Grade 1 achievements of Nickname joining those of the older No Nay Never to consolidate his reputation as a source of high-class juvenile talent. No Nay Never excelled on turf, Nickname was a true dirt runner. Their records offered a snapshot of Scat Daddy’s aptitude for throwing precocious runners and versatility, not to mention his ability to upgrade mares; at the time of his death, his progeny had won over 70 stakes races between them, having been bred off fees ranging from $10,000 to $30,000.

For all those associated with him, it was a cruel twist of fate

Scat Daddy, a Grade 1 star of the first crop belonging to Johannesburg, had been advertised as the leading North American first-crop sire of 2011 when coming out on top in a tight finish over Hard Spun (it was so tight that several outlets list Hard Spun as champion). Yet it was off the back of his shuttle sojourns to Chile that he initially really shone, with the horse becoming so dominant – he regularly sired the top three home in the nation’s Group 1 races during that period – that he came to be dubbed the ‘Galileo of Chile’. 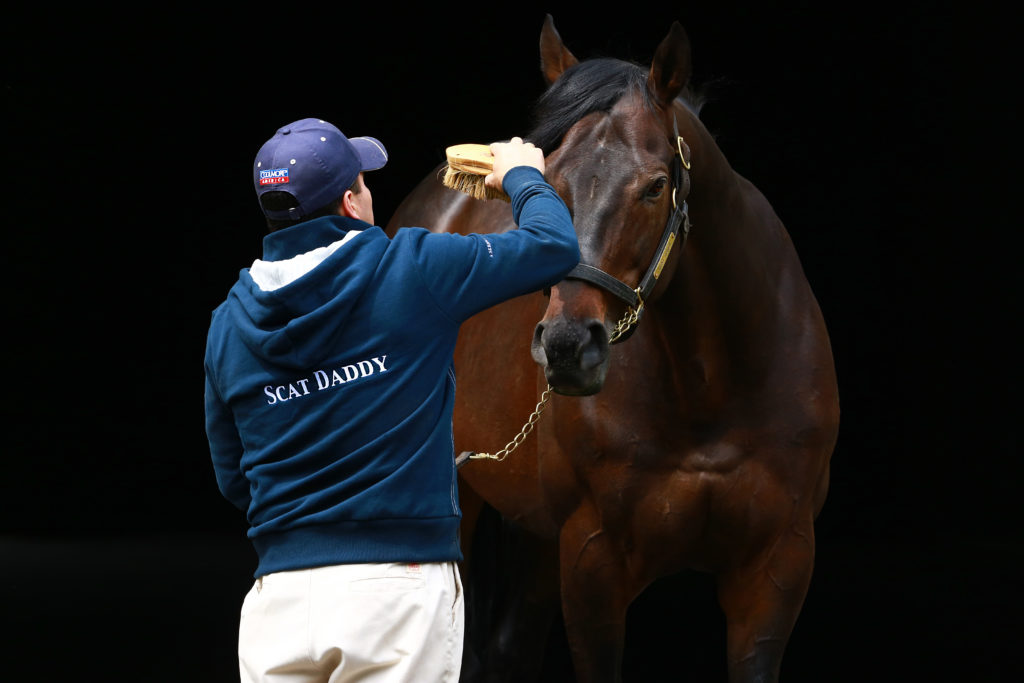 In the months following Scat Daddy’s death, Caravaggio and Lady Aurelia emerged as brilliant two-year-olds of their generation. In 2017, Sioux Nation won the Group 1 Phoenix Stakes. The best was still to come, however, in Justify, the unbeaten American Triple Crown winner of 2018.

How far might Scat Daddy have climbed had he not died so young? As it is, he has come to wield a significant influence over the breed.

For starters, the market has long been a fan of his influence. The Scat Daddy factor is synonymous with fast horses that come to hand early. In that, he doesn’t deviate away too much from the Hennessy/Johannesburg sire line, both of which were influences for juvenile speed. It is an attribute that makes the line commercial catnip, plus it helps enormously that it translates so well on both sides of the Atlantic.

History shows that Coolmore will throw their weight behind a sire line if they believe in it – for instance, significant and rapid investment have been made over the years in sons of Northern Dancer, Forli, Storm Cat, Sadler’s Wells and more recently War Front. Scat Daddy was no different, with their desire most likely emphasised by his early demise.

No Nay Never was the early pace-setter in that regard, with a fast start resulting in his fee shooting up from €25,000 to €175,000 within the space of two years. Others have since joined the roster, namely Caravaggio, Justify, Mendelssohn and Sioux Nation. With the last three fielding their first runners this season, and No Nay Never represented by his first six-figure crop of two-year-olds, it was always going to be a crucial year.

Positive momentum has indeed been building. But it is the results from the past week that will have supporters of the line in a particularly bullish mood.

In Ireland, No Nay Never supplied the brilliant Phoenix Stakes winner Little Big Bear. The colt joins Caravaggio and Sioux Nation as winning Scat Daddy descendants of the race, and scored in an outstandingly decisive manner reminiscent of his great-grandsire Johannesburg, who didn’t come off the bridle to win by five lengths in August 2001. That was the first of four Group 1 victories for the champion two-year-old Johannesburg that season, and as such, he is widely regarded as one of the best two-year-olds to have ever passed through Ballydoyle – however, judging by the way Little Big Bear put the race to bed on Saturday, Aidan O’Brien might just have unearthed one that is even better. Time will tell.

The talented Little Big Bear (NO NAY NEVER) takes his win streak to four in a huge way with a seven length Group 1 Phoenix Stakes romp for @Ballydoyle and owners Westerberg and the Coolmore partners. Bred by @camaspark & Summerhill.#CoolmoreSires #HomeOfChampions https://t.co/4mxENpG4pm

Little Big Bear is one of 133 two-year-olds from the first €100,000 crop of No Nay Never, and is far from being the only one to have made an impact. Stablemate Blackbeard was a late withdrawal from the Phoenix having previously landed the Prix Robert Papin and Marble Hill Stakes while Albany Stakes heroine Meditate stands tall among O’Brien’s juvenile fillies. The Richard Hannon-trained Trillium also won the Molecomb Stakes at Glorious Goodwood.

Meanwhile, at the other end of the fee spectrum is Sioux Nation, whose first crop were bred off €12,500. Sioux Nation represents a particularly commercial package as a good-looking, fast and precocious Scat Daddy, and as such breeders flocked to him in his first year at Coolmore’s Castlehyde Stud. As a result, he has an armoury of 153 two-year-olds to run for him, 52 of whom have already started and 20 of whom are winners. With a strong numerical advantage over many of his contemporaries, winners are obviously important but quality will always be key and in that respect, the past week was a crucial turning point for him thanks to the Group 3 successes of the fillies Sydneyarms Chelsea, who struck in the Prix Six Perfections, and Lakota Sioux, the tail-swishing winner of Saturday’s Sweet Solera Stakes. Another representative, Lakota Seven, was third in a Listed event at Tipperary.

Caravaggio also got in on the act by siring In Ecstasy, successful in a handicap on the Curragh’s Phoenix Stakes undercard, and Whitebeam, who continued her progression with a smooth win in the 7f handicap at Haydock Park. They are two of 60 winners from the 154-strong first crop sired by Caravaggio from his first season in Ireland. Seven are stakes winners led by the Cheveley Park Stakes and Prix Jean Prat heroine Tenebrism. For all that his son Maljoom also looked an unlucky fifth in the St James’s Palace Stakes, it has to be said that Caravaggio’s stud record would look quite different without Tenebrism – who is out of a particularly good mare in Immortal Verse.

In light of Caravaggio’s American female family, it will be interesting to see how he fares with the dirt-bred mares available to him in Kentucky at Ashford Stud, where he covered a book of 178 in his first season last year. 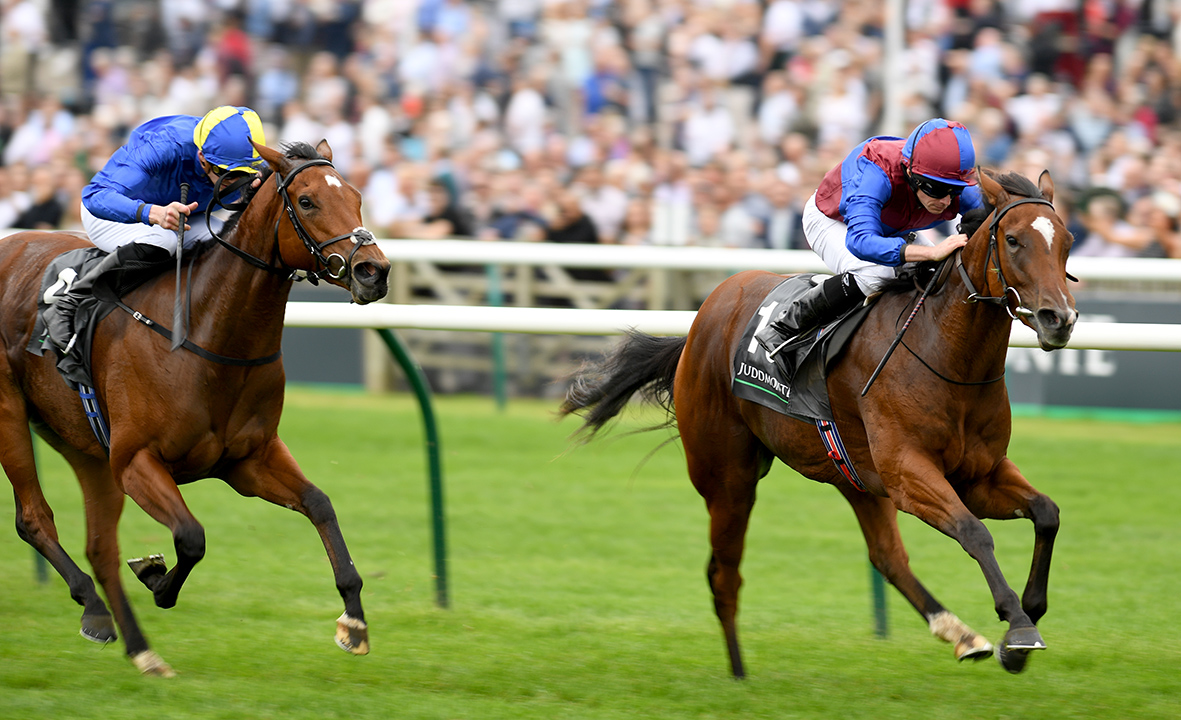 Tenebrism (right): daughter of Caravaggio is the leading performer for her sire – Photo; bill Selwyn

Immortal Verse has also been a vital cog in the launch of Justify. All eyes have naturally been on this horse since he retired to Ashford Stud at a fee of $150,000 in 2019. His first book consisted of a whopping 252 mares and the resulting foals sold for up to $1.55 million as yearlings. Justify is a big, robust horse and judging by the yearlings on offer in Kentucky last year, plenty have inherited his size. Yet an encouraging number have so far come to hand early, among them Tenebrism’s half-sister Statuette, who maintained her unbeaten record recently in the Airlie Stud Stakes at the Curragh. She is one of three by her sire to have run in Ireland so far for Ballydoyle alongside Dame Kiri, who has been placed as favourite on both her starts to date, and Unless, a daughter of Group 1 winner Clemmie who ran an underwhelming fifth as favourite on Saturday at the Curragh having been placed on debut. Both Dame Kiri and Unless are out of Galileo mares, a cross that has been employed heavily from the start – it will be interesting to see how that strategy fares.

Over in the US, Justify has also hit the ground the running. There is the unbeaten Grade 3 Schuylerville Stakes winner Just Cindy to go with the early maiden winners Tahoma and Prove Right (a mere $15,000 yearling). And his stock have continued to advertise his merits in the past ten days with his daughter Justique drawing comparisons in some quarters with Zenyatta with her last-to-first win on debut at Del Mar and Aunt Shirley – produced out of a Frankel granddaughter of Mariah’s Storm – winning well on debut at Ellis Park. Justify has had every opportunity thrown at him but so far, he is living up to the hype – and on both surfaces.

Also not short of opportunity has been Coolmore’s Breeders’ Cup Turf and UAE Derby winner Mendelssohn, a half-brother to champion sire Into Mischief and Hall of Famer Beholder with the looks to command $3 million as a yearling. As far as packages go, they don’t come much more appealing and unsurprisingly Mendelssohn covered 252 mares at $35,000 in his debut book. His stock have also been all the rage in the ring, selling for up to $1.3 million.

Justify has had every opportunity thrown at him but so far, he is living up to the hype – and on both surfaces

However, his first winner didn’t arrive until late June, and even then it was in Saudi Arabia, at which point Mendelssohn had had plenty of exposure in America and one runner in Europe. But he’s gained some momentum of late to the point that his record now consists of six American winners, among them Saratoga scorers Miracle and Pink Hue.

So the Scat Daddy gamble appears to be paying off. And naturally, other operations have followed suit, including Yeomanstown Stud, whose El Kabeir sired this year’s Derby fourth Masekela, and Haras de la Haie Neuve, which stands Group 2 winner Seahenge.

Coolmore already stand two sons of No Nay Never in Ten Sovereigns and Arizona, and in Little Big Bear, they have a further card to play. As to be expected from a €100,000 nomination, he is well connected, in his case as a direct descendant of the Wildenstein’s remarkable mare All Along.

All Along, bred by Alec Wildenstein by Targowice out of the Listed-winning Vieux Manoir mare Agujita, is the third dam of Little Big Bear via her final daughter, the Miswaki mare American Adventure. A champion in both Europe and America, All Along was a star of the early 1980’s, winning nine races over four seasons including the Arc, Rothman’s International, Turf Classic and Washington D.C. International during an international and tough autumn campaign that spanned 41 days in 1983.

At stud, she left behind 13 foals topped by the Prix Greffulhe winner Along All (by Mill Reef) and Listed winner Arnaqueur (by Miswaki). Several of her daughters produced a smattering of black-type performers but American Adventure, foaled in 2000, has been the most productive, notably as the dam of Listed winner Adventure Seeker (by Bering), in turn the dam of Little Big Bear. Adventure Seeker was beaten only half-a-length when third in the Prix de Malleret over 1m4f so there’s encouragement on paper that for all his pace, Little Big Bear will prove equally effective over a mile.

As with Bonanza Creek, the dam of Stone Age, Adventure Seeker passed out of Wildenstein hands when sold at the family’s dispersal at Goffs in 2016. A number of the stock, Bonanza Creek included, were snapped up by Peter Brant but Adventure Seeker was one that didn’t head his way, instead being knocked down to €125,000 to Brendan Bashford. Little Big Bear is the third foal out of her for current connections Camas Park Stud and Summerhill, who sold him for €320,000 to Mandore International on behalf of the Coolmore partners at Arqana last August. The mare has a yearling colt and colt foal, both by No Nay Never, to come. 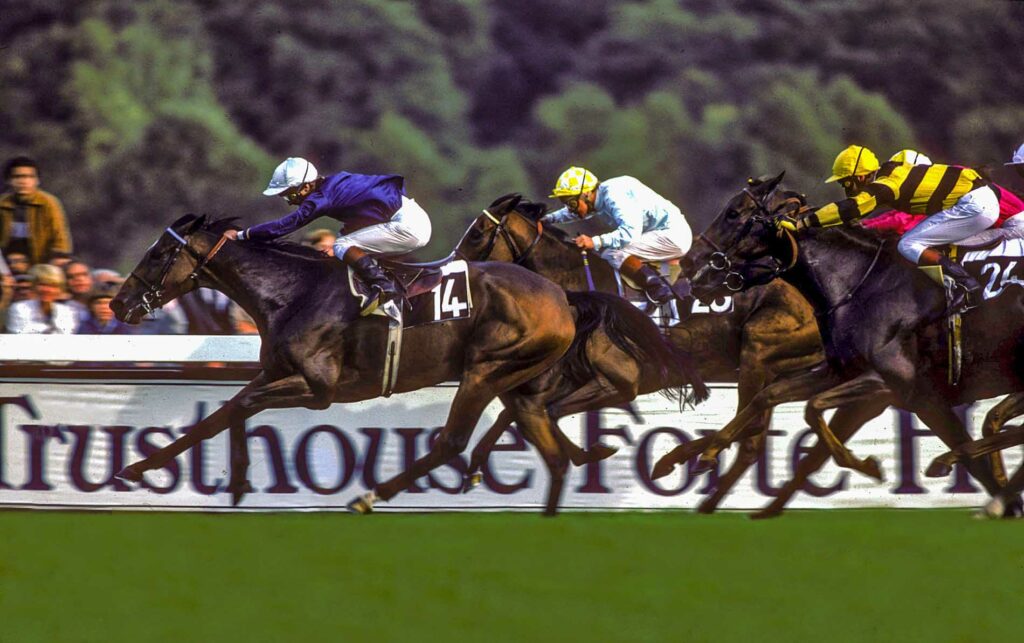 All Along wins the 1983 Arc from Sun Princess. Photo – George Selwyn 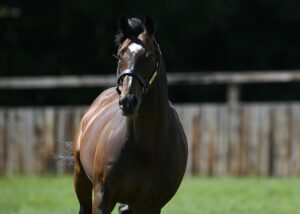