Ever since the ROA and BHA undertook an owners’ survey in the spring of 2016, the British racing industry has been focused on ownership like never before. It is doing this because there is a growing conviction that the key to improving racing on many different levels is through the expansion of ownership.

As this expansion has the effect of increasing the number of horses in training, so it will bring significant benefits for the whole industry. Put simply, more horses in training produces more competitive racing and more betting on the sport. It allows racecourses to put on a better show, and brings economic benefits for trainers, jockeys, stable staff and breeders.

The drive behind what can only be described as a virtuous circle is being led by the ROA. The association is now working with all of racing’s stakeholders on a wide range of initiatives, all of which fell out of the survey.

The central aim of the Ownership Strategy for British Racing is not so much to increase the number of owners but to retain the involvement of existing owners for longer periods. In doing this, the objective is to improve retention levels through initiatives both on and off the racecourse in order to grow the horse population.

Retention of owners is obviously linked to some things outside of our control, but research also shows how much can be done to retain an owner’s enthusiasm and continued involvement even when they may not necessarily have enjoyed great success on the racecourse.

It is a fascinating detail that owners who are members of the ROA remain in ownership, on average, for eight years, whereas this figure comes down to five years for non-members.

The reason for this is clear. Through their membership of this organisation, owners have a much better ownership experience, particularly when they go racing. They receive benefits, advice and communications that stimulate their enthusiasm even at a time when the success rate with their horses may be below expectations.

To be acknowledged and treated with courtesy on the racecourse, even when you don’t have a runner, is just one example of how a relatively simple thing can make owners feel valued and more likely to retain their involvement in the sport.

By extending this philosophy into many different aspects of owning racehorses, we believe it will result in a greater buy-in from owners and gradually improve their retention. We should remember that existing owners represent racing’s greatest sales force.

The trainer is clearly central to all of this, often being the owner’s main point of contact. It is also true, however, that most trainers never have enough hours in the day, so it is not surprising that some of them are the last to want to embrace new ideas and working practices.

But trainers are also the prime beneficiaries of seeing positive results come from these initiatives. They must therefore be persuaded of the importance of developing new skills in such areas as social media and the use of new technology to help enhance their relationship with owners.

Syndicates represent another important strand to this work, representing as they do a gateway for many owners to arrive in the sport. Ensuring that all syndicates adhere to the Code of Conduct is an important way to minimise the number of owners who are put off because they feel they are the victims of sharp practice.

While it is true that owners are now seeing better levels of prize-money – and the new appearance money scheme kicked in at the beginning of the year – this alone will not be sufficient to ensure we meet our objectives.

Whether it is trainers, racecourses or the ROA, we all have to realise that most owners don’t just want to own horses. They – sorry, YOU – have other expectations. You have told us what these expectations are and we now need to continue the work towards meeting them. 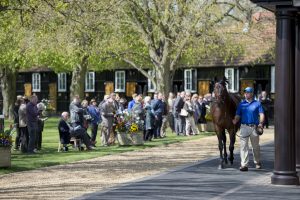 Up Next
Stud farms' vital role as havens for wildlife