Respect to the quiet men

Racing is a competitive and ruthless business where the owner calls the shots. Trainers and jockeys, flavour of the month one minute, are off the menu the next. Successful partnerships, some enduring for decades, can be over in the blink of an eye.

It often seems that loyalty is a quality in short supply these days – so it’s refreshing that men like Joe Fanning and James Fanshawe still have a place in our sport.

Joe Fanning’s association with Mark Johnston goes back 23 years. During that time he hasn’t always been number one rider in the stable and has often found himself being jocked off when the big races come along. Yet the partnership continues and at the time of writing, Fanning was approaching 50 winners for the trainer in 2017, easily the leading rider for the Middleham outfit.

A Group 1 strike was missing from Fanning’s CV until The Last Lion’s 25-1 triumph in last year’s Middle Park Stakes, due reward for a career that started over jumps in the late 1980s. Fanning understands how the game works – but that doesn’t mean he lacks ambition, even at the age of 46.

“It’s never nice being jocked off a decent horse; just because I don’t complain doesn’t mean it doesn’t bother me,” the jockey tells Tim Richards.

“You just have to keep your head down and keep going. As we know, Mark trains a lot of horses for Sheikh Mohammed, who employs retained jockeys, so it is understandable that they will be on board in the big races.

“Mark is responsible for plenty of other horses and has hundreds of winners. I am very much involved in the set-up – and long may it last.

James Fanshawe has been quietly – and successfully – going about his business for the last 27 years in Newmarket, having arrived in the town in 1982 as assistant to Sir Michael Stoute, with whom he spent eight years.

Fanshawe has adapted his training regime over time, with the result being a remarkably consistent supply of good-class horses and winners

Never blessed with big numbers but rarely without a Group 1 flag-bearer, Fanshawe has adapted his training regime over time, with the result being a remarkably consistent supply of good-class horses and winners.

“I was definitely a lot more gung-ho when I started,” Fanshawe explains to Julian Muscat.

“I’d take a chance buying horses on spec, and I’m much more methodical now in my overall approach. Routine with the horses is paramount here. I try not to break those rules. Overall, I take fewer risks and am probably more patient.

“There is tension involved in getting everything right [in the build-up to big races in which he has runners]. You have to concentrate hard. I said to myself a while ago that I needed to learn how to enjoy training horses, irrespective of whether they were winning or losing. In reality, it doesn’t work that way.”

Queally has suffered something of a fall from grace since his days with the late Sir Henry Cecil, when Frankel put him on the front pages during their unbeaten association that yielded 14 wins, including ten Group 1s.

He may be out of fashion with the big stables, but Fanshawe, who also put Queally on Northumberland Plate victor Higher Power, has not doubts about the rider’s ability on the big stage.

“Tom has proved himself to be world class,” Fanshawe states. “Tom has confidence in The Tin Man, which is very important. He knows what the horse can do.

“He has good hands and comes here to ride work a couple of times a week. It’s a good arrangement all round, and let’s hope that winning some decent races helps to get Tom going again.” 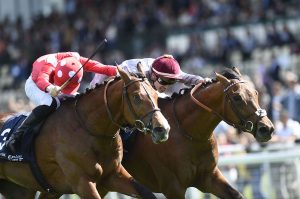 Up Next
A very good year