‘If you have dreams, you have to commit and go for it’
Exclusive Columns

Resilience under the microscope

Just why are American-breds racing less than in the past? Andrew Caulfield takes a look

I have long been convinced that not every so-called veterinary advance has been in the long-term interests of the breed – and figures published by the American Jockey Club would appear to confirm that the thoroughbred is not as durable as it used to be. In the figures listed in five-year increments between 1950 and 1975, the average American racehorse made more than ten starts per year, with a top figure of 11.31. Since then, though, there has been a steady decline in the average and it has never been as high as seven starts since 2001. The emergence of Covid probably makes it unfair to read too much into the figures for 2020 and 2021, but they respectively stood at 5.26 and 5.95.

Of course, to achieve an average of more than 11, a lot of horses will have had to race a considerable number of times to balance the handful of starts made by unsound horses or late-developing juveniles. The 2006 edition of The American Racing Manual details 29 “Great Horses of the 20th Century.” Some of the 29 are geldings, including such beloved individuals as Exterminator, John Henry, Kelso and Forego, veterans respectively of 100, 83, 63 and 57 races, and there are some tough-as-teak mares on the list too, such as Lady’s Secret and Shuvee, both of whom started more than 40 times.

Inevitably the list also includes several of America’s Triple Crown winners, but not all. It seems remarkable to modern eyes that several of these outstanding three-year-olds had been thoroughly tested at two, with 1941 winner Whirlaway packing 16 of his 60 career starts into his juvenile career, while 15 of Count Fleet’s 21 starts were made at the age of two. Four of the next five Triple Crown winners – Assault, Citation, Secretariat and Affirmed – all raced nine times as juveniles and somewhere between 11 and 20 times at three. By the time they lined up for the Kentucky Derby, Whirlaway had raced 23 times, Count Fleet 17 times, Citation 16, Secretariat 12 and Affirmed 13.

Quite a few accomplished colts missed out on completing the Triple Crown after their successes in the Kentucky Derby and Preakness Stakes. Among the most notable were Northern Dancer, who had raced 14 times prior to the Kentucky Derby, even though he was still 25 days short of his actual third birthday when he landed the Derby. Spectacular Bid also lined up at Churchill Downs as a veteran of 14 starts, whereas the 1987 winner Alysheba had raced ten times before the Derby. And while Hail To Reason didn’t last long enough to contest the Triple Crown, this champion two-year-old was tough enough to compete 18 times as a juvenile in 1960. Even he could be said to have had things cushy in comparison to the astonishing Seabiscuit, who made 35 starts as a two-year-old in 1935, starting on January 19 and ending on November 11.

So how does this compare with subsequent generations? Needless to say, there was a very long interval of more than 30 years after Affirmed’s achievement before America saw another Triple Crown winner and then two came along in the space of four years. The first, American Pharoah, had raced just five times prior to his first Classic victory but proceeded to prove his soundness, retiring as an eight-time Grade 1 winner. The second, Justify, had made just three starts, never having raced at two, and wasn’t seen again after his Triple Crown triumphs. Of other recent winners, California Chrome had raced ten times, Orb and Nyquist seven times, Super Saver six times, I’ll Have Another and Always Dreaming five times and Animal Kingdom four times. These are respectable totals, fuelled by the fact that connections of Kentucky Derby hopefuls are effectively forced to race their candidates if they are to secure enough points to make the final line-up.

I find it hard to pinpoint exactly when American trainers became so reliant on the use of race-day medication.

Medication hasn’t always been included in the various race charts and it would be naive to think that widespread use of race-day drugs suddenly happened. However, the chart for Strike The Gold’s victory in 1991 shows that eight of the 16 runners were treated with Lasix (furosemide) and that 15 of the 16 were racing on the anti-inflammatory Butazolidin (phenylbutazone). Bute had clearly been in widespread use well before 1991, as the 1968 Kentucky Derby winner Dancer’s Image was disqualified after traces of the drug were found in his post-race test. The drug hadn’t been approved by Churchill Downs at that time, but was legal on most racetracks. Fortunately, it was eventually recognised that racing on Bute represented a threat to both horse and rider.

The chart for Lil E. Tee’s 1992 Kentucky Derby victory shows only six of the 18 runners on Lasix, but 16 of the 18 on Bute. Mention of Bute seems to have disappeared from the Equibase charts soon afterwards but the winner Go For Gin was one of only four horses not on Lasix in a 14-horse field for the 1994 Kentucky Derby. By 2005, 18 of the 20 runners were on Lasix.

I also rooted through old issues of the Blood-Horse’s annual reviews of the Breeders’ Cup. The 1991 Classic at Churchill featured 11 runners, of which seven were on Lasix and nine were on Bute. The first three finishers – Black Tie Affair, Twilight Agenda and Unbridled – were all on both medications. There was no mention of Bute on the 1992 chart, but the 1993 Classic at Santa Anita had eight of the 13 runners on Bute but only five on Lasix. The French-trained winner Arcangues was on neither. If the 1994 chart is to be believed, only six of the 14 runners were on Lasix, but they filled the first six places. Understandably, ten of the 11 contenders for the next year’s Classic were on Lasix. Bute was mentioned in 1997, when the action returned to California. This time all nine runners were on Lasix and seven were also on Bute. By now race-day Lasix was very much the norm rather than the exception. Bute was again in evidence when the Cup reverted to Santa Anita in 2003, with all ten runners in the Classic being doubly medicated. Interestingly, the review of the 2007 Classic, which Curlin won decisively from Hard Spun, commented that “Curlin and Hard Spun are rare individuals – throwbacks to a time when horses were tough and durable and thrived on racing,” but both were on Lasix.

Bearing in mind that racing on Lasix can result in significant weight loss, it isn’t surprising that trainers often felt the need to space out their runners’ races, which must have been a contributing factor to the fall in the number of starts being made by the average modern racehorse. Change, though, is gradually coming.

Although every single runner in the 2020 Triple Crown events raced on Lasix, the hosts of the Triple Crown races subsequently phased out its use within 24 hours of a race. For the first time, the Breeders’ Cup also staged all 14 of its races in 2021 without any race-day medication, having initiated the rule in its two-year-old races in 2020. There have been other pioneers, including the Stronach Group and 2015’s champion sprinter Runhappy, who was campaigned without the use of drugs on the insistence of his owner. Anyone who listened to the defenders of drug use, such as Eric Hamelback of the National Horsemen’s Benevolent and Protective Association, could have been forgiven for thinking that the racing world would stop turning after the introduction of the drug-use reforms. That doesn’t seem to have happened and the sport in general now seems to recognise that reforms are essential if American racing is to have a future.

So what is the situation with the 2022 Kentucky Derby, scheduled to be run on May 7? With only one remaining trial – the Grade 3 Lexington Stakes – capable of altering the points table, there are 20 colts which have earned 40 or more points. It almost goes without saying that none of the 20 has come close to matching the sort of action-packed preparations of the old-timers. That said, I would be delighted to see contenders for the Epsom Derby accrue similar amounts of experience before their big day in June.

The least experienced of the Kentucky Derby top 20 include two sons of the admirably tough Gun Runner. One of them, Taiba, landed the Grade 1 Santa Anita Derby on only his second start, and the other, Early Voting, was beaten only a neck in the Grade 2 Wood Memorial Stakes on his third appearance. There’s also Charge It, a very well-connected Tapit colt, who was racing for only the third time when second to White Abarrio in the Grade 1 Florida Derby. At the other end of the scale, the versatile Tiz The Bomb, a winner on dirt, turf and all-weather, has raced eight times, as has Barber Road, runner-up in the Grade 1 Arkansas Derby.

At this stage, one of the most exciting aspects of the 2022 Kentucky Derby field is that a pair of young stallions – Gun Runner and Not This Time – are responsible for several of the contenders. In addition to Taiba and Early Voting, Gun Runner could be represented by Cyberknife, who had nearly three lengths to spare at the end of the Grade 1 Arkansas Derby. These three rank among a tremendously impressive total of 11 black-type winners from a first crop of 127, alongside the champion two-year-old filly Echo Zulu and her fellow two-year-old Grade 1 winner Gunite and Grade 2 winners Pappacap and Wicked Halo.

That’s seven Graded winners so far and it isn’t difficult to envision Gun Runner developing into a champion sire. He was, of course, a champion on the track, notably landing the Breeders’ Cup Classic and Horse of the Year title as a four-year- old in 2017, as well as the richly-endowed Pegasus World Cup shortly before his retirement to stud. With Candy Ride as his sire and a Giant’s Causeway mare as his dam, Gun Runner was bred to stay a mile-and-a-quarter and he is clearly passing on a good measure of his stamina, as well as his talent. He was tough too, winning 12 of his 19 starts.

Not This Time’s racing career was much shorter, limited to four outings as a juvenile. This son of Giant’s Causeway created a very favourable impression when he took his second and third starts by wide margins – so favourable that he started favourite for hot-looking edition of the Breeders’ Cup Juvenile. Although he ran well in the Juvenile, failing by only a neck to wear down Classic Empire, he came out of the race with a soft-tissue injury which meant that he covered his first mares at three, instead of going down the Triple Crown trail.

Like so many young stallions, Not This Time suffered from diminishing demand in his early seasons, with 145 mares in his first season, 129 in his second and 87 in his third. However, his first two-year-olds included the Grade 1 winner Princess Noor and his second contains two of the most experienced contenders at Churchill Downs. Coincidentally, both these colts are out of daughters of Candy Ride, so their pedigrees contain the same elements as Gun Runner’s. One of them, Epicenter, amassed the most Kentucky Derby points, thanks largely to his Grade 2 victories in the Risen Star Stakes and Louisiana Derby. The other, Simplification, was third in the Grade 1 Florida Derby after his success in the Grade 2 Fountain Of Youth Stakes. It’s possible that Not This Time will have a third contender, depending on how the Fountain of Youth runner-up In Due Time fares in the final trial.

Let’s hope that they again show that race-day Lasix isn’t necessary, as most of the racing world recognises 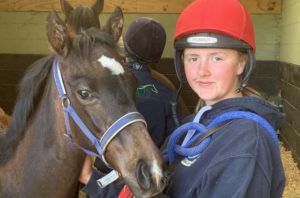 Up Next
‘If you have dreams, you have to commit and go for it’