The recent news that Trempolino, the Arc winner of 1987, had finally succumbed to the grim reaper at the age of 34 revived many memories of his sire Sharpen Up, one of my all-time favourites. Sharpen Up could indeed be compared to another of my favourites, Dark Angel, as both these winners of the Middle Park Stakes have far exceeded general expectations as stallions.

Trempolino, who died recently in retirement at Haras de Mezeray at the age of 34

The Middle Park provided Sharpen Up with his fifth win from as many starts but, remarkably, his record was officially good enough to make him only the third-best juvenile in Bernard van Cutsem’s Stanley House Stables. Van Cutsem, trainer of such former stars as Park Top and Karabas, was also the handler of Crowned Price, the impressive conqueror of future Arc winner Rheingold in the Champagne Stakes, and High Top, the burly Derring-Do colt who won the Observer Gold Cup, as a prelude to his win in the following year’s 2,000 Guineas.

Although Timeform rated Sharpen Up only 1lb below Crowned Prince, there was a vast difference in their respective backgrounds. Crowned Prince, a magnificent-looking colt with the distinction of being a brother to the Kentucky Derby and Preakness winner Majestic Prince, had set new record figures for a yearling when he sold for $510,000 in 1970. The homebred Sharpen Up, on the other hand, was a son of Atan, a once-raced American horse who had briefly stood in Ireland for a fee of 100gns before being sold to Japan.

Atan had shown terrific speed on his single appearance but Sharpen Up’s dam Rocchetta had failed to win in 14 attempts at up to two miles. Rocchetta was, though, a sister to Outcrop, an admirably tough and game filly who had landed both the Yorkshire Oaks and the Park Hill Stakes.

With this pedigree of opposites it was difficult to guess what Sharpen Up’s optimum distance might be as a three-year-old. ‘Racehorses of 1971’ expressed the view that speed was Sharpen Up’s greatest asset and that “although we are not, at the moment, prepared to rule him out of the Two Thousand Guineas … we expect instead to see him make his mark as a sprinter.”

Although he had the handicap of being by a little-known stallion, Sharpen Up’s looks more than compensated, with Timeform’s describing him as a strongly-made, lengthy, most attractive colt, and he was also an eye-catching mover

It fell to me, in my first year at Timeform, to summarise Sharpen Up’s second season, as follows: “His record as a three-year-old, with runs over seven furlongs, then six, then five, implies that his connections held similar beliefs [to the previous year’s Timeform writer], but now, looking at his performances in 1972, we are not sure we were right.”

Of course a colt who went close to winning the July Cup must have had plenty of speed but, as I wrote at the time, “it seems a pity that we did not have the chance of seeing Sharpen Up racing at a mile.”

Sharpen Up was syndicated for £3,750 per share and retired to Side Hill Stud at Newmarket. As there were only 40 shares in the syndicate, Sharpen Up was valued at £150,000. Although he had the handicap of being by a little-known stallion Sharpen Up’s looks more than compensated, with Timeform’s describing him as a strongly-made, lengthy, most attractive colt, and he was also an eye-catching mover.

Even as long ago as 1973, breeders were eager to use fast horses with plenty of juvenile ability, but the British industry was much smaller then and Sharpen Up covered no more than 34 mares in his first year. Nowadays it is hard to believe that a stallion of Sharpen Up’s achievements is credited by equineline as having sired only 646 foals during a career which spanned 17 seasons, from 1973 to 1989. His fertility began to fade in his last few seasons, forcing his retirement in 1990, two years before his death at the age of 23.

Small numbers, big results
It is worth stressing how small Sharpen Up’s output was in comparison to today’s stallions. For example, the similar Dark Angel already has 919 foals of racing age from his first eight crops. He also has a yearling crop numbering more than 150 and, with luck, he should eventually leave around 2,000 foals. Another recent Middle Park Stakes winner, Shalaa, is reported to have covered 158 mares in his first season in France before being shuttled to Arrowfield in Australia, where he covered a further 155. That’s a first-season total of 313 mares, compared to Sharpen Up’s 34.

Sadler’s Wells left 2,259 foals without ever shuttling. Move the search back another generation to Sadler’s Wells’s sire Northern Dancer and you come to a Sharpen Up-like total of 646, all of which illustrates how enormously the industry has changed – and not always for the better

An older shuttle sire, Fastnet Rock, is currently credited with having sired 2,250 of racing age, even though he is no older than 17 in 2018. Fastnet Rock’s 2017 exertions included 133 mares in Ireland and a further 163 in his native Australia. Danehill, another famous shuttler, left a legacy of 2,499 foals, a total which has already been easily overtaken by Galileo, with his tally of 2,610 foals of racing age.

Galileo’s sire Sadler’s Wells left 2,259 foals without ever being asked to shuttle. Move the search back another generation to Sadler’s Wells’s sire Northern Dancer and you come to a Sharpen Up-like total of 646, all of which illustrates how enormously the industry has changed – and not always for the better.

As book sizes have risen, the percentage of black-type winners sired by stallions has generally fallen substantially. Whereas Northern Dancer’s figure stood at a stunning 23 per cent, Sadler’s Wells achieved 13 per cent and Galileo is currently credited with ten per cent, even though he is the outstanding stallion of his era. Dubawi has 11 per cent and War Front ten per cent, while both Deep Impact and Tapit have eight per cent.

Despite starting at a fee of £1,000, Sharpen Up managed to sire 12% black-type winners in a career divided between Side Hill and Gainesway in Kentucky.

You can get a good idea of his progress from the prices paid at public auction for Sharpen Up’s nominations and shares.

By the 1975 season (his third), his nominations were averaging around £500 but by his fourth year the figure had slipped to £337, from nine sold. His 1977 nominations sold for £700 after his first two-year-olds had made an unspectacular start on the home front (there was a Group 3 winner in Italy).

The tide started to turn in 1978, when his juveniles featured the multiple winner Fire Angel (Timeform 116), the Coventry Stakes runner-up Sharpen Your Eye (TF 113) and the classy filly Smarten Up (TF 109). The response was that a 1978 nomination sold for £2,300, and two breeders decided that the time was right to sell their Sharpen Up share, with the price rising from the original £3,750 to an average of £5,900.

Then Smarten Up won the Temple Stakes and ran second in the William Hill Sprint Championship to boost her Timeform rating to 119, while Kris ended an unbeaten juvenile season with victory in the Horris Hill Stakes to boost his rating to 123. Kris’s contemporaries included Captain Nick (107), Eyelet (112) and Jeroboam (116), which added up to an excellent achievement for a stallion whose no-guarantee nominations had sold for only £500.

The only nomination sold at auction for the 1979 season made £5,400 and the buyer had every reason to feel smug when Kris proved the dominant British miler of 1979, helping Sharpen Up finish fourth on the sires’ table. Sharpen Up’s 1979 three-year-olds also included Sharpman, who underlined his sire’s versatility by finishing third in the Prix du Jockey-Club over a mile and a half. By this time Sharpen Up’s services were in great demand, with a 1980 nomination selling for £10,500 and a share for £27,000. And therein lay the potential problem. Sharpen Up was rapidly becoming the type of horse likely to attract an offer which the original shareholders would find extremely difficult to refuse.

Then along came another tremendous season for Sharpen Up in 1980. Kris continued to rule the roost among the older milers, extending his record to 14 wins from 16 starts, and Sharpen Up’s three-year-old crop – the one for which nominations had sold for as little as £337 – contained the excellent sprinters Sharpo (William Hill Sprint Championship) and Sovereign Rose (Diadem Stakes). The 1980 juveniles were headed by that admirable filly Pushy (Queen Mary Stakes and Cornwallis Stakes).

The upgrader
It was impossible not to notice that he had sired Kris from a lightly-raced mare with a Timeform rating of 59; Sharpo from an unraced mare; Sovereign Rose from a mare who had failed to win on the Flat or over hurdles; and Pushy from a minor winner with a Timeform rating of 81. Here was that Holy Grail every breeder searches for – a stallion capable of seriously upgrading his mares. Inevitably the too-good-to-be-refused offer was made by Gainesway Farm, which had previously harvested the likes of Lyphard and Riverman from other European studs.

Although Sharpen Up’s reputation in Britain rested largely on his fast and precocious stock, the likes of Pebbles and Sharpman showed that he could also sire very smart performers over middle distances

Confirmation that Sharpen Up’s sale represented a serious blow to the British industry was provided by Kris’s brother Diesis, who completed the Middle Park-Dewhurst Stakes double in 1982, and Sharpen Up’s final British crop contained Pebbles, the highly popular 1,000 Guineas winner who went on to further Group 1 successes in the Eclipse, the Champion Stakes and the Breeders’ Cup Turf.

Although Sharpen Up’s reputation in Britain rested largely on his fast and precocious stock, the likes of Pebbles and Sharpman showed that he could also sire very smart performers over middle distances, given mares with enough stamina to support the staying blood in the bottom half of his pedigree. His American progeny produced several more like them. Trempolino won the 1987 Arc, Exactly Sharp the 1988 Prix Lupin and Sanglamore the 1990 Prix du Jockey-Club. He also sired Grade 1 winners over nine furlongs and a mile and a quarter in the U.S., but his last top-class winner in Britain was Selkirk, a first-rate miler.

Trempolino originally joined his sire at Gaineway and he contributed five Grade 1 winners to a total of more than 50 Group/Grade 1 winners sired by sons of Sharpen Up, the most prolific being Selkirk, Diesis and Kris. Kris and Diesis shared the distinction of siring a total of four Oaks winners, led by the 1,000 Guineas, Oaks and St Leger heroine Oh So Sharp.

The male line has started to struggle in recent years, following the deaths of Selkirk and Diesis’s son Halling, but it isn’t finished yet – Overbury Stud is home to Selkirk’s Dubai Duty Free winner Cityscape and Halling’s Irish Derby winner Jack Hobbs. 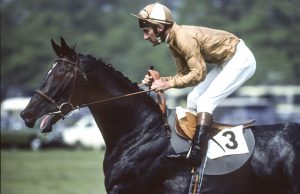 Up Next
Towers of strength behind GSB passion