Celebrating an era that was truly unique
Exclusive Columns

Reintroduction of breeders’ prizes under consideration

The enormous thought and effort being applied by the British Horseracing Authority and the European Pattern Committee into first arresting and then reversing the decline in the breeding of staying horses in Europe is extremely welcome. I have referred before to the consequences of not doing so, but they are worth repeating, because losing those staying genes and descending into a serious loss of variety in the race programme are so obvious to see in Australia.

The Melbourne Cup is Australia’s most famous race and the dominance of European-bred horses in the latest running in November was even more pronounced than in previous years.

In total, 18 of the 23 runners were bred in Europe. Rekindling, the winner, was bred by the Pocock family at their farm in Somerset, and five of the first ten home were British-bred. Of the other five, three were Irish-bred and two French-bred. The first of just three Australian-breds in the field finished 14th.

Imagine the outcry across the British breeding industry, and particularly in the media, if the first ten home in any of our major Flat races were imported from, say, the USA.

Clearly Britain still has a significant pool of mares and stallions capable of breeding useful staying racehorses. Provided there is a recognised, long-term plan to sustain stayers and staying races, with suitable incentives that acknowledge the extra time, cost and effort of getting the slower-maturing horse to the racecourse, then there is every chance of preserving that diverse gene pool, which is so essential not only to British Flat racing but also the survival of top-class National Hunt racing.

Demand from around the world for European bloodstock is changing the dynamics of supply and demand from the model that has sustained the racing industry in this country for many years.

The growth in exports to those countries that cannot breed horses, such as Hong Kong, or do not breed them in significant numbers, such as the Middle East, or no longer breed a certain type of horse, such as stayers in Australia, is ever increasing and will continue to put a strain on the supply side of our sport.

That supply of horses to the industry in Britain is vital, because it will ensure sufficient runners for every sector and every distance category to thrive. Whatever the post-Brexit era may bring, to continue relying on imports from overseas to the level we currently do would be a dangerous and unsustainable way to secure our race programme.

Despite some changes and recently publicised threats to the status quo across the Irish Sea and English Channel, British breeders do not operate on a level playing field with our European counterparts, since France’s breeders’ premiums and Ireland’s tax incentives give their breeders an advantage. Therefore, Britain must look to incentivise owners and breeders to maintain and expand the supply of home-bred horses.

The recent TBA/Breeders Strategy Review Group, which forms part of the BHA’s Strategy For Growth, has looked at various options to encourage British breeders, and the cross-industry group has decided to focus its thoughts on breeders’ premiums and how they might encourage breeders and breeding post-Brexit.

The French use €26 million, ten per cent of their total prize-money pot, to support premiums, and while Britain’s central funding is much smaller than in France, we need to make a start on a similar exercise.

Ten per cent of the levy distribution of approximately £50m to prize-money in 2017 would give the industry around £5m to be used to incentivise the breeding and racing of British-bred horses. I am confident that would make a substantial difference in the practice and perception of breeding and buying British-bred horses in this country.

Various other fiscal advantages could be examined, particularly those that might assist small breeders. Anything that enables those with a few mares to offset some of their costs, especially in terms of replacing in-training fillies for their breeding operations, must be worth considering.

The TBA will work with others to examine the various options around these opportunities and bring forward proposals for consideration by the industry. 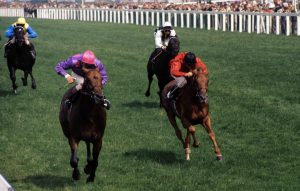 Up Next
Celebrating an era that was truly unique