It is unlikely that many people went into last week with the idea that Sheikh Mohammed Obaid Al Maktoum might win the Derby. But a week can be a long time in racing and by the close of play on Saturday, the sportsman had not one but two leading Classic fancies under his ownership in the Roger Varian-trained pair El Drama and Third Realm.

Neither were particularly strong in the market for their respective assignments. El Drama, who had run third in the Spring Cup at Lingfield Park following his two-year-old debut success at Doncaster, defied odds of 12-1 to win Thursday’s Dee Stakes at Chester while Nottingham scorer Third Realm was sent off the 14-1 outsider for Saturday’s Lingfield Derby Trial yet took home the spoils in a manner of a colt worthy of serious consideration at Epsom.

El Drama could yet be diverted to Chantilly for the Prix du Jockey Club. However, it appears to be full steam ahead to Epsom for Third Realm, now generally a fifth choice in the betting for the race at around 10/1.

While El Drama was a pricey 425,000gns Tattersalls October Book 1 purchase by Varian, Sheikh Obaid must derive even greater satisfaction out of the development of Third Realm having bred the colt out of his homebred Listed-placed mare Reem Three.

What’s more, Reem Three has become a producer of real significance for the owner as the dam of seven winners, four of them at black-type level. They include the admirable Cape Byron, who formed the first leg of a major across-the-card double for his dam when making a winning seasonal return in the six-furlong conditions race at Haydock Park just minutes before Third Realm’s Lingfield success.

Cape Byron, whose five previous wins for Varian include the 2019 Bengough Stakes and Wokingham Handicap, is a strong, deep girthed gelding with a look of his sire Shamardal to him. Third Realm, on the other hand, is a son of Sea The Stars and as such is coming into his own over middle distances.

The pair provide a snapshot into the versatility of their dam that is further underlined by Reem Three’s first black-type runner, Group 1 winner Ajman Princess. By Teofilo, Ajman Princess was saddled by Varian to win the 2017 Prix Jean Romanet and Daisy Warwick Stakes, and is now a member of Sheikh Obaid’s broodmare band; her first foal, the ambitiously named two-year-old Future Queen, is a first-crop daughter of the owner’s multiple Group 1 winner Postponed.

Then there is the former Simon Crisford-trained pair of Ostilio, a free-running son of New Approach who won the 2018 Prix Daniel Wildenstein having previously struck in the Britannia Stakes at Royal Ascot, and Imperial Charm, a daughter of Dubawi who ran third in the 2019 Prix Saint-Alary.

As such, the mare has clicked with five different stallions to produce five high-class winners over a variety of trips. Two of them, Cape Byron and Ostilio, have also scored at Royal Ascot; perhaps Third Realm, who holds an entry in the King Edward VII Stakes, is capable of joining the list in due course.

Possibly assisting Reem Three to good effect is her background, which contains no Sadler’s Wells or Danzig blood. Instead, she is a daughter of Mark Of Esteem and therefore a granddaughter of the outstanding broodmare sire Darshaan. She is also inbred 4×3 to Mill Reef.

Mark Of Esteem is not quite Darshaan when it comes to his influence as a damsire but a rollcall of 13 Group or Grade 1 winners in that department does consist of several weighty names, notably Treasure Beach, Masked Marvel, Avenir Certain and Crystal Ocean.

Reem Three was foaled in 2003 and like most of Sheikh Obaid’s horses of the time was trained by Luca Cumani. She developed into a smart filly over the course of eight starts, winning three races including a competitive extended ten-furlong handicap at York’s Dante meeting as a three-year-old. She also gained valuable black type when second in the Hoppings Stakes at Newcastle.

At that stage, Reem Three was the best runner produced by the Fairy King mare Jumaireyah, herself a two-time winner for the Obaid-Cumani axis. However, the page was later fleshed out by her half-brother Afsare, an excellent miler for the same partnership who won the Celebration Mile and Sovereign Stakes. The son of Dubawi also came close to Grade 1 glory when second in the 2012 Arlington Million.

Prior to that, Sheikh Obaid had also campaigned Jumaireyah’s full-sister, the Listed-placed Altaweelah, with Cumani as well as her talented half-brother Lost Soldier Three, a durable gelding whose 12 wins included the 2005 John Smith’s Cup at York.

Another half-sister, the winning Zeeba, is also a black-type producer as the dam of Danadana, Obaid’s 2013 Huxley Stakes winner.

Sheikh Obaid has been associated with this family since the days of Reem Three’s granddam Donya and Third Realm’s victory on Saturday brings the number of stakes performers bred and campaigned by him out of it to ten.

Donya didn’t show a huge amount for Sir Michael Stoute, with a placing in a back-end three-year-old maiden at Redcar the best to show in two starts. But she was well-bred, as a Mill Reef daughter of Dunette, who landed a surprise victory over subsequent Arc heroine Three Troikas in the 1979 Prix de Diane. Donya was her second foal and immediately followed by French Glory, who returned the family to Group 1 heights when successful in the 1990 Rothman’s International for Khalid Abdullah.

Donya might have been one of the least accomplished of Dunette’s ten foals but she has been the daughter who has kept her line alive in this part of the world. As Jumaireyah and her descendants show, the family is now almost solely the domain of Sheikh Obaid and so it would be a fitting result were it to provide him with his second Derby winner after High-Rise.

As noted above, Third Realm would appear to have inherited plenty of stamina from his sire Sea The Stars. Winner of the Derby himself during his glittering three-year-old campaign for John Oxx in 2009, he has continued to play an important role in the Epsom Classics since then as the sire of Taghrooda, whose Oaks triumph in 2014 set the seal on his excellent first crop, and Derby hero Harzand.

As ever, his famous dam Urban Sea looks set to play a strong hand in Derby proceedings given that she features in the background of no fewer than seven of the top eight in the betting. Galileo once again acts as the primary channel although two of the hopefuls, Mohaafeth and Mac Swiney, are inbred to the great mare (in the case of Mac Swiney via two strains of Galileo) – as was the 2018 winner Masar. 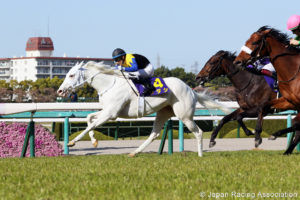 Up Next
White wonder Sodashi takes the plaudits in Japan