I bought my first book on racing when eleven years old – and for no better reason than I was about to embark on a rail journey and wanted something to read to while away the time. What is more, if the bookstall at Exeter Central station had been able to offer me something on football, that is what I would have chosen. I knew nothing about racing, and mere mild curiosity about the subject persuaded me to part with a shilling (5p in today’s money) for the 1956 News Chronicle Racing Annual. 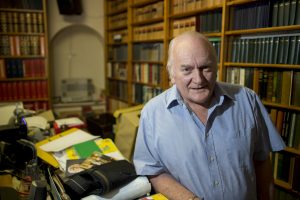 Tony Morris: an avid reader and collector of racing books since the age of 11

I had no idea what I was getting into, though by the time I reached my destination I did know I wanted to learn more about a sport that had previously pretty much passed me by. And, as I knew nobody who might teach me anything about this esoteric subject, that meant I would need to buy another book. I couldn’t foresee that a second book would not satisfy my curiosity, that there would need to be many more, and that I was about to acquire an expensive addiction as a compulsive buyer of racing books for the next sixty years.

I still have that original purchase, though front and back covers are long gone and it begins with page seven. And I note that the black and white caricature of jockey Edgar Britt on page 35 has been ‘decorated’. It seems that some young person felt the need to apply blue and red ink to his cap.

Finding the cash for additions to the collection was never easy. Once I had seen an advertisement for Racehorses of 1958 and a description of what it contained, I had to have a copy

Subsequent purchases were treated with more respect. Bob Lyle’s biography of Brown Jack, picked up cheaply at a second-hand bookshop in 1957, featured a dozen Lionel Edwards drawings providing ample scope for decoration, but they were not defaced. Similarly left pristine were the numerous illustrations in John Hislop’s From Start to Finish, an excellent manual for would-be jockeys, which was the only racing book ever given to me by my parents; that was a Christmas present in 1958.

Finding the cash for additions to the collection was never easy, a fact best illustrated by my first ‘big money’ purchase early in 1959. Once I had seen an advertisement for Racehorses of 1958 and a description of what it contained, I had to have a copy – and soon. But at £2 pocket money and paper round combined came nowhere near. I borrowed fourteen shillings (70p) from a schoolmate, who had a long wait for reimbursement while I lapped up the education that the book provided.

I was still at school when I learned about the Horseman’s Bookshop, situated just off Buckingham Palace Road, and obtained catalogues from its proprietor, Joe Allen. Years later I would come to know him well and be a regular visitor at the shop, but as an impoverished teenager I purchased from him by mail order. Discernment never came into it; I just bought items priced in shillings rather than pounds, trusting that I would learn something from whatever I could afford.

As it turned out, I was still in my teens when I fluked an entry into Fleet Street as a racing journalist. My take-home pay was under £10 a week, and from that I had to find £2 for my digs and another £2 for my rail fares. That meant I was rich; there was more scope for buying books, and feeding off them had a higher priority than eating.

Of course, I was well aware by then that I had become an addict, but there was no escaping from it. My trust in book-learning was paying off, and I had to keep acquiring more. Marriage and a mortgage didn’t seem to make much difference; I had to have more books. And I had to have books relating to every aspect of the sport, with breeding and history representing key angles that I felt bound to pursue.

Marriages – plural – failed, for a variety of reasons, but one was a need for alternative premises; the library kept outgrowing my homes

The trouble was that having one copy of a regularly published volume just meant that others in the series became desirable. I wanted full sets of Ruff’s Guides, Racehorses, General Stud Books, Racing Calendars, Bloodstock Breeders’ Reviews and my wants weren’t confined to British publications. Marriages – plural – failed, for a variety of reasons, but one was a need for alternative premises; the library kept outgrowing my homes.

There were some memorable events. In the mid-1960s I persuaded my mother, who had only just learned to drive, to undertake a journey to Weston-Super-Mare so I could collect rather more than 200 copies of the Racing Calendar. A few years later I acquired the collection of a former and recently deceased colleague over the phone; I paid £50 for a box of books, knowing nothing about what it contained. One item was Phil Bull’s first annual, the rarely found Best Horses of 1942. What a way to complete my set!

I coveted a bound set of the Sporting Magazine (1793-1870) back in the sixties, but it was thirty years later before I could track one down, and the price had risen tenfold in the meantime. It took me close on two years to pay for them, and I needed thirty feet of shelving to house them, but what a fabulous resource they turned out to be.

It was 1989 before I found a home that could take all the accumulated books, while allowing scope for additions. And there have been plenty of additions, all too many of them in the category I class as ‘of no earthly use, but nice to have.’ It’s taken me a long time, but I think I now realise the futility of much that I’ve done over the last 60 or so years.

I’ve been spared, perhaps unfortunately, to arrive in an era when books have lost their appeal. People don’t want hard copies of things they can find on the internet, often downloadable free, gratis and for nothing. I’ve accumulated, at considerable cost, a load of items that are now next to worthless. My consolation is that they have provided me with so much interest and knowledge when it really mattered to me.

I think I have finally conquered my addiction. The thought that I actually needed no more racing books occurred a while ago, but I still felt temptation when something new or potentially interesting came along. I’m not so vulnerable now. I bought Tony Barber’s new history of the St Leger, and rather liked it, but I’ve bought nothing since and have no plans to buy anything else.

Still, I have found so much that thrilled me and stimulated me in the course of my time as an addictive buyer of racing books. I found – and cherish still – the works of Henry Hall Dixon, for my money the greatest of all racing writers, and I’ve learned so much from outstanding writers like Phil Bull, Peter Willett, Charles Hatton, Joe Estes and John Hislop. It has often been said that in the field of sports writing the best examples are to be found in golf, boxing and cricket. Perhaps, but my mentors in racing have served me very well.

Cured of my addiction, I’m going further than ceasing to make acquisitions. I am resolved to become a seller of racing books, and I’m looking forward to discovering the colour of the walls in my study; the floor-to-ceiling bookshelves hid that from sight a quarter of a century ago. I’m not proposing to part with everything, just the few thousand items that I feel sure I won’t miss. The books I know I can re-read with enjoyment will remain, as will some reference works which I will continue to need until such time as I discover how to access on the internet the information they contain.

A new life beckons – or will do, once one of the grandchildren explains what I have to do to become a seller on eBay. 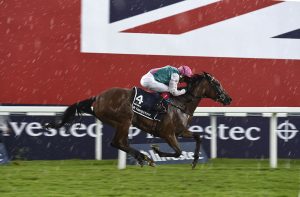 Up Next
Juddmonte’s major milestone