Raising the flag for Hasili

Modern Thoroughbred breeding would be much the poorer without the influence of Juddmonte Farm’s outstanding mare Hasili.

Homebred by the farm out of Kerali, Hasili won the Listed Prix des Sablonnets as a two-year-old over an extended mile at Nantes for Henri-Alex Pantall and after a pair of Listed-placed efforts at three, was retired to embark on what was to become a remarkable stud career.

All told, the Kahyasi mare bred five Group/Grade 1 winners in Banks Hill, Cacique, Champs Elysees, Heat Haze and Intercontinental in addition to Dansili and Deluxe, both of whom were Group 1-placed – although had Dansili not encountered such a troubled run when a fast-finishing third to War Chant in the 2000 edition of the Breeders’ Cup Mile, that top-notch miler may very well have joined that illustrious Group 1 list.

As it was, Hasili’s Group 1 stud record places her on a par with the famed Australasian producer Eight Carat, also the dam of five Group 1 winners, among them Lonhro’s sire Octagonal.

One of the most remarkable aspects of Hasili’s family has been its ability to throw successful stallions.

Obviously Dansili has been a tremendous contributor to the breed, notably as the sire of 21 Group/Grade 1 winners including Harbinger, Flintshire, The Fugue, Rail Link and Zoffany. Armed with various successful sire sons worldwide, his reputation as an effective broodmare sire also grows by the year.

Dansili enjoyed a long stud career at Banstead Manor Stud in Newmarket, where his fee peaked at £100,000 prior to his retirement in 2018. Sadly by contrast, his younger brother Cacique was blighted by fertility problems so severe that he left behind only around 160 foals over the course of seven seasons.

Even so, he still managed to sire the Group/Grade 1 winners Slumber, who now stands at Calumet Farm in Kentucky, Mutual Trust and Dominant. His is certainly a story of what might have been.

Then of course there was Champs Elysees, whose relatively inexpensive crops for Juddmonte yielded the likes of 1,000 Guineas heroine Billesdon Brook and Ascot Gold Cup winner Trip To Paris.

Hasili’s champion daughter Banks Hill has also made a contribution as the dam of Ideal World, sire of the top South African mare Smart Call from his base of Mauritzfontein Stud in South Africa. Multiple Group 1 winner Smart Call, who was also trained by Sir Michael Stoute to win the 2018 Group 3 Hoppings Fillies’ Stakes at Newcastle, is one of 25 stakes winners from the first seven crops of Ideal World, a French Listed winner by Kingmambo.

Dansili: son of Hasili has been a tremendous contributor to the breed

Now add Raise The Flag to the list. An anomaly in the stud record of Hasili as the only one of her eight runners not to win, the son of Sadler’s Wells has quietly compiled a fair record at White Robe Lodge Stud in New Zealand off lowly fees and finally broke through into the big time on Saturday when his seven-year-old daughter Etah James captured the Group 1 Sydney Cup at Randwick.

Now under the case of Ciaron Maher and David Eustace, the New Zealand-bred Etah James came into the race with a Group 3 win in the 2018 Lord Reims Stakes at Morphettville for Matt Cumani as the highlight of her previous seven victories. But she had shown up well when fourth of 17 on her previous start in last month’s Group 1 Auckland Cup at Ellerslie for co-owner Mark Lupton and set against the likes of William Haggas’ Young Rascal and Ebor Handicap winner Mustajeer this time around, turned in a fine display to run down Raheen House and win by a head from the fast-finishing fellow Kiwi-bred The Chosen One.

The Sea The Stars gelding Raheen House, winner of the Bahrain Trophy during his days with Brian Meehan, stuck on for third to fall only half a length short of emulating his brother Shraaoh, last year’s winner of the race.

Bred by Mark and Cath Lupton, Terry Reid and Gary Howes, Etah James is from the second crop of Raise The Flag, bred when he stood for just NZ$4,000 (£1,900) in 2011. Hasili’s only foal by Sadler’s Wells, himself then coming towards the end of a glorious stud career, Raise The Flag made just one start for Andre Fabre when sixth in a three-year-old Longchamp maiden.

The colt boasted several Group 1 entries at the time but an injury suffered during that race sadly dictated that his career would ultimately be restricted to that one public showing and he was retired to stand at White Robe Lodge Stud in partnership with Juddmonte Farms.

He was relatively well supported in his early seasons, his first four crops never dipping below the 70-foal mark. A first stakes winner arrived in January 2017 when third-crop member Raise You Ten landed the Listed Gore Guineas at Gore in New Zealand. Since then there have been a further six stakes winners, among them the White Robe Lodge-bred Listed winners Parthesia and Civil Disobedience. And while Etah James is by far the most accomplished, the sextet does also include Group 3 winner Broadside.

The stallion that keeps delivering! Raise the Flag sired Etah James delivers in the Group 1 Sydney Cup for @cmaherracing 🙌🏼🔥 how good 👊🏼🥳

Raise The Flag is the fifth male descendant of Hasili to sire a Group 1 winner. Nor should the deeds of other relations be forgotten, among them Leroidesanimaux, the product of a half-sister to Hasili, who sired Kentucky Derby winner Animal Kingdom. This family also goes directly back to Harry Isaacs’ wonderful mare Itsabet, whose other descendants include Giant’s Causeway, his successful brother Freud and last year’s promising first-crop sire Gleneagles.

All of which continues to make the future stallion prospects belonging to this family extremely desirable. Forge, a Group 2-placed Dubawi son of Heat Haze, was recently acquired for stud duty at Haras Carampangue in Argentina. More exciting, however, is the potential of Sangarius, a grandson of Banks Hill.

The impressive son of Kingman wasn’t seen out again after his win in last year’s Hampton Court Stakes at Royal Ascot but should he follow the example set by so many Sir Michael Stoute improvers, then it doesn’t take too much imagination to envisage him swiftly making up into a Group 1 performer and perhaps later joining the roster at Banstead Manor Stud.

Etah James is the best of four winners from as many to race out of Etah, a daughter of the Danehill stallion Danasinga who is sister to the dual Group 3 winner Tickle.

Etah has a two-year-old colt by Alamosa and a filly foal sister to Etah James. She was covered by Coolmore shuttler US Navy Flag last spring. 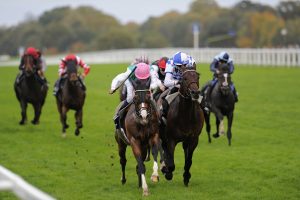