Rags to riches in a short time

I am writing this at the end of October, while still wrestling with the task of trying to suggest the most suitable stallions for mares belonging to a variety of clients. When I tell people about this part of my work, the standard response is, ‘How fascinating!’ – and it is. The reality, though, is that it can also be deeply frustrating.

We are effectively dealing with a very limited number of bloodlines, with a large proportion of the available stallions coming from just four male lines – Danehill, Green Desert, Sadler’s Wells and Mr Prospector.

There are also some other major restrictions. If the client is breeding for the sales ring, the market seems to demand speed rather than the often very deserving middle-distance performers. There are also major difficulties accessing some of the most accomplished stallions. And when price has been factored in, all that is often left is a disappointingly small selection, which helps explain why so many of these stallions end up covering somewhere between 130 and 230 mares. 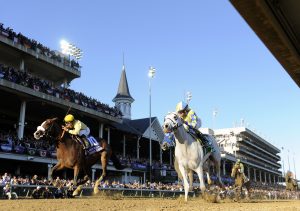 Consequently, I live in constant hope that a stallion will emerge in the USA, Japan, Australasia or even South America which could help supply something different to the homogeneous bloodlines of the British and Irish industries.

I was therefore excited when the Thoroughbred Daily News granted Rising Star status to Musawaah, an American-bred filly from the first crop by Union Rags. This flashily-marked bay romped home two and a half lengths clear of Treve’s sister Terre in a newcomers’ race at Saint-Cloud on October 26, leading her trainer Freddy Head to think immediately of next year’s Classic trials. Head did wonder, though, whether she would be fast enough for the Guineas trials.

Musawaah’s owner-breeder Sheikh Hamdan made a bold decision in sending Musawaah to France, rather than to one of his American trainers, as the filly has a dirt pedigree. Her once-raced dam Mudreqah is by Seeking The Gold, whose 15 starts all came on dirt, and Musawaah’s second dam, Magical Allure, also raced exclusively on dirt, notably winning the Grade1 La Brea Stakes.

Union Rags was another dirt specialist – and a very good one at his best. One aspect of his career which greatly appealed to me was his versatility. Although he is a big individual, described in his advertisements as 16.2½ hh, he was forward enough to win his first three races as a two-year-old, starting as early as July 12.

He had more than seven lengths to spare in the Grade 2 Saratoga Special over six and a half furlongs and more than five lengths in hand in the Grade 1 Champagne Stakes over a mile. No wonder he started a clear favourite for the Grade 1 Breeders’ Cup Juvenile at Churchill Downs, but he failed by a head to reel in the all-the-way winner Hansen.

His three-year-old career didn’t go as smoothly and he never landed a blow after traffic problems when second favourite for the Kentucky Derby. He bounced back, though, to wear down Paynter for a neck victory in the Belmont Stakes over a mile and a half. Little more than a month later he was found to have a small tendon injury. The injury was minor enough to allow a return at four but Union Rags’ owner decided the risks involved were too great and he was retired to Lane’s End Farm.

Union Rags’ fee of $35,000 made him America’s highest-priced new sire of 2013. Expectations were therefore fairly high and he has maintained his position as one of the leaders of his generation. He ranked third behind Bodemeister and The Factor by yearling average at the 2015 sales, and both The Factor and Union Rags have wasted no time in siring their first Grade 1 winner.

Union Rags did so when his daughter Union Strike won the Del Mar Debutante in early September and top-flight victory number two came along a month later when another daughter, Dancing Rags, took the Alcibiades Stakes. Their efforts earned Union Rags a clear lead over Tapizar and Gemologist at the head of the first-crop sires.

Although Union Rags was a dirt performer, there are several aspects of his pedigree which suggested he could also develop into a good sire of turf runners. For a start, he is inbred 3 x 4 to Northern Dancer through two sons who enjoyed plenty of success with their turf runners. One of them, the mighty Nijinsky, doesn’t require any added information, but the other – Union Rags’ grandsire Dixieland Band – had a lower profile.

It is well worth mentioning that the last six of these winners at Group level all did so at the age of two, and Union Rags’ sire, Dixie Union, was another accomplished two-year-old by Dixieland Band. Dixie Union, like Union Rags, matured quickly and won four of his six starts at two, before developing into a Grade 1 winner over seven and nine furlongs at three.

The bottom half of Union Rags’ pedigree is full of names familiar to European racegoers. His dam Tempo, by Zafonic’s sire Gone West, has made her mark in Europe via her top-class grandson Declaration Of War (a horse who handled dirt as well as turf).

Union Rags’ second dam, the very smart American turf filly Terpsichorist, was a sister to Gorytus, the Nijinsky colt who briefly looked a potential superstar when he won the Champagne Stakes. Third dam Glad Rags won the 1,000 Guineas, so you can see why I think Union Rags is well equipped to make his mark on this side of the Atlantic.

Unfortunately, he can’t do so unless breeders or buyers give him the chance, which they largely seem not to be doing. At the time of writing he had had no starters in Britain or Ireland and Musawaah is his only two-year-old in France.

European buyers are also noticeably absent from the list of buyers of Union Rags’ second-crop yearlings, one exception being Oliver St Lawrence, who paid $125,000 for a colt. It’s not too late, though, as there are sure to be some Union Rags juveniles at next year’s two-year-old sales.