Encouraging signs in the rise of Uncle Mo
Exclusive Columns

Racing benefits from touch of Frost

Bryony Frost entered last year’s Cheltenham Festival as a relatively unknown amateur, albeit one with a fine National Hunt pedigree as the daughter of former top jockey, Jimmy Frost. This March she will gallop into jump racing’s Olympics as one of the sport’s newest stars, with a burgeoning CV that includes Grade 1 success. Such is the progress the 22-year-old has made in the last 12 months.

There remains a degree of scepticism from a number within the sport, particularly over jumps in Britain, about the fairer sex’s capabilities

Victory in the 2017 Foxhunter Chase on Pacha Du Polder – the horse that finished a never-nearer fifth the year before under Victoria Pendleton – was an early indication of Frost’s talent. Turning professional four months later, she had her first ride as a conditional aboard novice chaser Black Corton, on a midweek card at Worcester. They won that day – and it has been onwards and upwards for both horse and rider ever since, culminating with a top-level triumph in the Kauto Star Novices’ Chase at Kempton over Christmas.

Frost, the subject of a superb interview with Tim Richards, says she would not have turned professional without the support of Paul Nicholls, and the trainer (along with the owners) deserves huge credit for giving her the chances to prove her worth, especially in Graded races where she is not allowed to use her claim.

There may be considerable momentum behind the female jockey movement, if one can call it that, with the excellent Josephine Gordon leading a number of talented women on the Flat, but can it extend to NH racing? There remains a degree of scepticism from a number within the sport, particularly over jumps in Britain, about the fairer sex’s capabilities. Frost’s claim, 5lb at the time of writing, may be valuable to the Nicholls stable but one would have thought there would be greater demand for her services from outside.

In the same way that a horse’s pedigree becomes mostly irrelevant once their ability has been proven on the racecourse, so the gender of the pilot should cease to matter once they have done the same. You can argue all day about strength in the saddle but riding racehorses is about so much more than strength, as Frost explains.

“You must have faith in the horse, and the horse in you,” Frost says. “You are going out to battle together and you have to ask him or her to push their body to the limit and they must want to do it for you.

“For me, I must believe in them and get to know them very fast, sometimes for the first time on the way to the start, like Milansbar, who showed me he’s an awesome chap to ride before winning last month’s Classic Chase at Warwick.

“You must work out what sort of character you are on, be it a willing partner, or one that needs telling what to do. Some horses don’t take kindly to being told, like some humans they’ll stick two fingers up at you. But some have to be told because they lack confidence.

“On the day, I believe that I am trying to encourage the horse to be ‘somebody’ and if he or she responds by giving everything, win or lose, I feel proud and grateful.”

Perhaps Nigel Twiston-Davies would be happy to give Frost an opportunity or two, although the Naunton handler has his own team of promising conditionals to support.

A mainstay of the upper reaches of the trainers’ championship for three decades, Twiston-Davies was, at the time of writing, sitting in third place in the table behind Nicholls and current champion, Nicky Henderson.

In a must-read feature, Twiston-Davies tells Chris Cook how he fell into training racehorses, why he still hates to lose and how his ever-expanding family keeps him grounded. 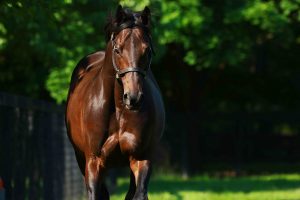 Up Next
Encouraging signs in the rise of Uncle Mo