An owner-breeder is surely entitled to dream of further glories when he succeeds in breeding an Oaks winner from an Oaks winner, as Sheikh Hamdan Al Maktoum did in 2005, when Eswarah followed in the footsteps of the 1986 winner Midway Lady.

Eswarah was to prove admirably prolific as a broodmare, producing nine foals in her ten-year career but the sad truth is that only four of the nine became winners. The classic-winning daughter of Unfuwain died at the age of 14 in 2016, the year she produced the winning miler Mutasaamy. None of her five runners succeeded in achieving a Racing Post rating higher than 98 and the only one to earn black-type was her Mr Greeley filly Firdaws, who proved rather disappointing following her third in the Group 1 Shadwell Fillies’ Mile in 2011.

All is not lost, though. Numerous high-class performers who have disappointed as broodmares have later made amends via their broodmare daughters and six of Eswarah’s nine foals were fillies. A couple were sold comparatively cheaply, with her winning Street Cry filly Qawaafy making only 15,000gns when she was culled as an eight-year-old, while Eswarah’s unraced Medaglia d’Oro filly Aljaaziah made €42,000 at the same age. Both had been given every chance, with Qawaafy’s first three mates being Sea The Stars, Teofilo and Golden Horn, while Aljaaziah’s first foal was by none other than Dubawi.

Fortunately, the Shadwell Stud Book still contains all four of Eswarah’s four other daughters, including the winning Dubawi filly Elraazy, the unraced Sea The Stars filly Taqleed and Firdaws, who has a two-year-old by War Front and a yearling by Tapit. I say fortunately because her eldest daughter, the unraced Garmoosha, is now the dam of Raabihah, the Sea The Stars filly who has carried Sheikh Hamdan’s colours to victory in three of her four starts.

Raabihah’s impressive win in the Group 3 Prix de Psyche confirmed that she has inherited a good measure of her grandam’s talent and she looks destined for even better things – on her only defeat she was beaten just a short neck, a head and a head when fourth behind those Group 1-winning fillies Fancy Blue, Alpine Star and Peaceful in the Prix de Diane.

Garmoosha’s story as a broodmare underlines the advantages of having an owner with plenty of resources. Although she was born in the U.S. and has spent the great majority of her broodmare career there, she was flown to Europe to visit Sea The Stars in 2016 before being quickly returned to her homeland. The motivation was that Garmoosha is by Kingmambo, whose daughters had enjoyed eye-catching success with their Sea The Stars progeny in 2015.

All five of his runners out of Kingmambo mares had won by that stage and two of them had performed well at Group level in 2015, with the two-year-old Cloth of Stars winning the Group 3 Prix des Chenes, while the three-year-old Migwar turned in a couple of smart efforts over 2,400 metres.

The Sea The Stars-Kingmambo partnership soon looked even more promising and its statistics now stand at 13 winners from 14 starters, with six of the 14 scoring at black-type level. Cloth of Stars, of course, went on to win the Group 1 Prix Ganay, while Zelzal and Chemical Charge respectively took the Group 1 Prix Jean Prat and the Group 3 September Stakes.

Garmoosha has thoroughly justified her away-day trip to Ireland. She has since produced a 2019 filly to Kitten’s Joy and a 2020 filly to More Than Ready, the Kitten’s Joy filly being a sister to the stakes-placed American winner Filfila, who is also a member of Shadwell’s American broodmare band.

There maybe a couple of possible good-luck stories out here, as two of Garmoosha’s daughters sold very cheaply a few years before Raabihah’s emergence. Rawya, conceived when her sire Medaglia d’Oro stood at $100,000, sold for 1,800gns in 2016 and a year later 3,000gns was paid for Tureyth, who was conceived when her sire Street Cry also stood at $100,000. Bloodstock agents are probably tracking them down as I write. Rawya is in France, where she has progeny by Sommerabend, Stormy River and Galileo’s son Recorder and Tureyth has youngsters by Due Diligence and The Gurkha. 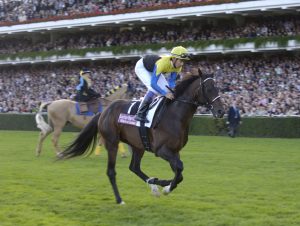