ROA President Charlie Parker’s Leader column in the May edition of The Owner Breeder got me thinking. On this occasion, his reference to the debacle that ensued when six English Premier League football clubs briefly tried to break away to join six continental teams in a European Super League made me think about the similarities and differences between horseracing and professional team sports such as soccer.

All professional team sports employ their participants in some form or other and so, operating under the auspices of an international or national governing body, they are largely able to dictate where and how they participate.

This is a very different set-up from that of horseracing, where over-arching bodies such as the International Federation of Horseracing Authorities and British Horseracing Authority do not stage events, unlike, say, FIFA, which puts on the football World Cup, and other sports that cater for individuals competing against each other, such as tennis and golf. In these examples, the venues that stage events attract participants with various conditions and a financial offer that encourages them to take part, at whatever level.

This then allows the venues to bring in paying spectators and to sell the media rights generated by these events, and the higher the quality of the event, the greater the reward from selling media rights. In nearly every case, this arrangement produces a financial package that works for everyone involved, operates an aspirational pyramid and gives the players an important say regarding scheduling etc.

It also means that at the top level there are usually more participants wanting to take part than spaces available and so a full field is guaranteed.

Taking tennis and golf as examples, there is no doubt that the level and standard of the event, whether at national or international level, is clearly understood and provides a ladder to the top to which everyone can aspire. The highest end of the sport is well financed, marketed widely and leads the way in engaging spectator or viewing interest.

These sports have recognised that the elite sector and its stars create the greatest general interest and that this element of the sport must be promoted and properly financed, so that the interest generated at the top can trickle down and be shared for the benefit of everyone else involved at a lower level.

Racing has many similarities with these sports but has never come together to promote and package the top end of the sport. There is very little narrative as events move from one fixture to the next.

Individual venues have been left to promote their festivals and major events without co-ordination with others to build a complete story. Therefore, if British racing wants to sell to overseas investors and online betting operators a compelling story about the best racing in the world, it needs to create and package a premium product that looks and feels like top quality sport. It does not have to deliver the highest standard every day – no other sport does – but it must have reliable quality and competitive action when it is available.

As the coronavirus pandemic recedes and everyone moves forward, there is a real opportunity to try and build a consensus between horsemen and racecourses around the creation of a Premier League of racing to the benefit of all.

This should not be exclusive, such as was proposed by the European Super League, but it should bring together venues which wish to subscribe and take part at the top level of racing and participants who want to compete at that level. The concept is not new, but the sport has shied away from it on a number of occasions.

There is little doubt that major investors in thoroughbred racing in Britain are losing faith in the sport’s ability to create a well-financed upper tier, with commensurate prize-money and a compelling narrative. These loyal supporters over many years – not to mention new investors who must be attracted to the sport – will not continue to participate unless we act now to give them good reasons and tangible encouragement to invest in the sport’s future. 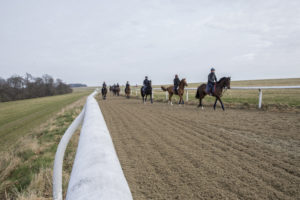 Up Next
Revenues reappraisal required to aid recovery