Following a Cheltenham like no other, the ROA President on why prize-money remains a problem in British racing

Whilst Cheltenham, with the help of its media partners, put owners at the heart of the raceday, the results on track at the Festival showed that the lack of prize-money in Britain is beginning to have a visible impact. Similar concerns surrounding the Flat are bubbling up. With the fantastic social experience on the racecourse missing for over a year as the sport has continued mainly behind closed doors, the poor return that our horses are racing for has been laid bare.

It was a Cheltenham like no other. With no spectators or owners on track we missed the action in person. Empty stands were the backdrop to the week’s action whilst the victorious horses and jockeys returned to deserted enclosures.

Gone was the famous Cheltenham roar but still there was the same magic. Blackmore blazed a trail. Tiger Roll showed us his talent. De Bromhead broke the mould. It was a great week that has raised excitement levels ahead of owners being allowed to return to the racecourse.

Even more so, owners were put firmly at the centre of the day, with stories throughout the TV coverage and giant ROA banners adorning the main stand. Cheltenham properly celebrated the owner this year; it was a real shame that none could attend. Our thanks must go to all the committed owners, participants, the Jockey Club and ITV, whose collaborative and can-do attitude made it all possible.

There was one nagging hangover, however. The complete obliteration of the British runners by the Irish, some 23-5. How things have changed in a matter of years, when the British were outperforming our Irish friends and the Irish were having to take a good look at their own house.

There were some extraordinary factors at play: no owners, Brexit and Covid have all taken their toll. I am also sure that the likes of Paul Nicholls, Dan Skelton, Alan King and Nicky Henderson will be leading the charge next year. But, when some of the best and most experienced trainers in Britain leave Cheltenham on Friday night without a single winner on the board, we need to stop and think. A stewards’ enquiry will no doubt be held and it needs to hear the views of the owners and trainers to find the right answers. We should start by listening to those owners whose horses are racing in Ireland while they themselves reside in Britain.

It’s bigger than Cheltenham. Many have remarked that prize-money is the rotten root of the problem in British racing, not just in National Hunt.

The impact of reduced prizes on the Flat is also causing great concern, with fewer top-quality yearlings going into training and the continued sale of highly-rated prospects to other jurisdictions another major issue bubbling just under the surface.

Those who believe that poor prize-money levels are not the cause of talent drain or loss of owners should wake up. Cheltenham may have been a circumstantial blip, but the problems are systemic. We know this is the case yet choose to ignore it. The sport must tackle the prize-money problem together. We cannot just redistribute the ‘pie’; we have to grow it for all and make sure British racing continues to be seen as the destination for top-quality bloodstock and investment.

At the highest level, the ROA and Horsemen’s Group continues to work through new commercial agreements with racecourses to improve prize-money levels and get a better share of rights income to the owners and participants who contribute so much. In addition, changes to the way the levy is collected and ultimately distributed are high on the agenda. My experience so far is that changes take time, but the clock is ticking, and short-term wins are needed to keep the wagon rolling.

To this end we have just announced new changes and improvements to prize-money distribution that will improve median earnings by up to 13% for owners, trainers and stable staff, ensuring a better return on investment in non-Pattern races. These projects – tackling the basic costs and return for owners, dropping the barriers, and raising the rewards – are the meat of the matter that can help push racing forward as an attractive investment.

The return of owners to the racecourse gives us all a boost with the new Flat season underway and Aintree up next. Wishing all owners the best of luck over the coming months. 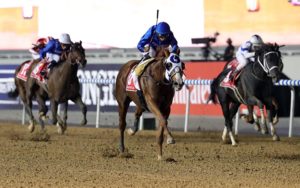