The Kodiac half-brother to Trip To Paris breezing on the Rowley Mile on Monday – Photo: Laura Green/tattersalls.com

As a premier auction of its kind, the Tattersalls Craven Breeze-Up Sale, staged over two evening sessions on Tuesday and Wednesday following racing in Newmarket, offers the first real major insight to the health of the European breeze-up market.

The circuit opened earlier this month with the Tattersalls Ireland Ascot Breeze-Up Sale and although figures declined across the board, there was some satisfaction in a trade that featured a good 86% clearance rate; at the end of the day, vendors need to move on these horses, regardless of the tier of market they are operating in.

Last year’s Craven Sale was dominated by demand for the last crop of Scat Daddy, who supplied each of the top three lots led by a 900,000gns colt – subsequent Gimcrack Stakes runner-up Legends Of War – who was knocked down to Stephen Hillen out of the Mayfields Stables draft.

Another expensive Scat Daddy colt, Global Prospector, made 800,000gns to Charlie Gordon-Watson on behalf of Dr Johnny Hon. He recently made a successful debut for Clive Cox.

Both colts have a bright future, but time will tell whether they are up to following the example of fellow graduate La Pelosa by progressing to Group 1 level. La Pelosa, a 280,000gns purchase by Godolphin from Tally-Ho Stud, progressed with every run for Charlie Appleby last season to ultimately land a deserved Group 1 success in the Natalma Stakes at Woodbine. Group 1 performers Brando, Thundering Blue, Gronkowski and Stormy Antarctic – who struck in the Group 3 Kalkmann Fruhjars-Meile at Dusseldorf on Sunday – are others to have flown the sale’s flag in recent seasons.

This year’s catalogue has been tightened by Tattersalls to 147 lots and includes representatives of some of Europe’s leading sires, including Dark Angel, Invincible Spirit, Kingman, Kodiac, No Nay Never, Oasis Dream, Sea The Stars and Showcasing.

It also comes with the additional incentive of the inaugural Tattersalls Craven Breeze-Up bonus, whereby participating owners will receive a £15,000 bonus if their purchase wins a qualifying race in Britain and Ireland starting from May 20.

Strong turnout for the #TattsCraven Breeze Up Sale breeze at a sun drenched @NewmarketRace ☀️ pic.twitter.com/yNMe7OP15q

“The bonus has been very well received, as we hoped it would be,” says Jimmy George, Marketing Director of Tattersalls. “All these things take a little bit of time to bed in but they make a real difference – our £25,000 Book 1 bonus has been unbelievably popular and we’ve already distributed almost £3.5 million in bonuses.

“Some of these horses catalogued also qualify for the Book 1 bonus and when you add in Plus 10 on top of that, there’s £55,000 to be won. We want owners to feel richly rewarded and I think these bonuses have struck a chord.”

The breeze took place amid quick conditions on the Rowley Mile on Monday morning in front of a healthy crowd of onlookers. While domestic participation is key, George envisages some international interest, particularly from Hong Kong, the USA and the Gulf region.

Among those vendors cautiously optimistic ahead of this year’s sale was John Cullinan, who sells under the Church Farm and Horse Park Stud banner with Roger Marley. The pair sold the well regarded Come On Leicester and Fox Champion at last year’s sale and return this time around with five youngsters.

“Conditions were quick for the breeze and there was a fairly strong headwind,” says Cullinan. “But they looked to be a pretty consistent bunch of horses and we know we have a nice group of horses. The Tagula colt (lot 80) is quick – he changed his legs a few times in the breeze but we like him and believe in him.

“The Dandy Man colt (133) is a colt we like and he’s ready to go. And we have two nice Kodiacs, both with good minds and actions.”

Obviously in these cases, a horse’s popularity is driven by its performance at the breeze. However, those big money lots are also invariably supported by a big pedigree, meaning that it could pay to watch out for the following quintet.

The first of two on offer by his sire, who was the first horse in 37 years to sweep the American Triple Crown. The other, a filly out of stakes winner Iplaytricks, is lot 96.

This youngster is one of the most expensive pinhooks catalogued, having been purchased for $375,000 by Alliance Bloodstock and Dale Brennan as a Keeneland September yearling – as hefty as that price tag was, however, it still fell behind the $452,273 yearling average recorded by his sire, such was the demand for his first crop.

Bred by Springhouse Farm, this colt is a half-brother to Sirenia Stakes heroine Shumoos, who also ran second in the Queen Mary Stakes for Brian Meehan, and out of an unraced sister to Grade 1 winner Cat Fighter. From a European perspective, it’s notable that Wile Cat is also a half-sister to Irish Group 3-winning sprinter Ishiguru, subsequently a useful sire at Tweenhills Farm.

Consigned by Alliance Bloodstock as the property of Christopher Brennan 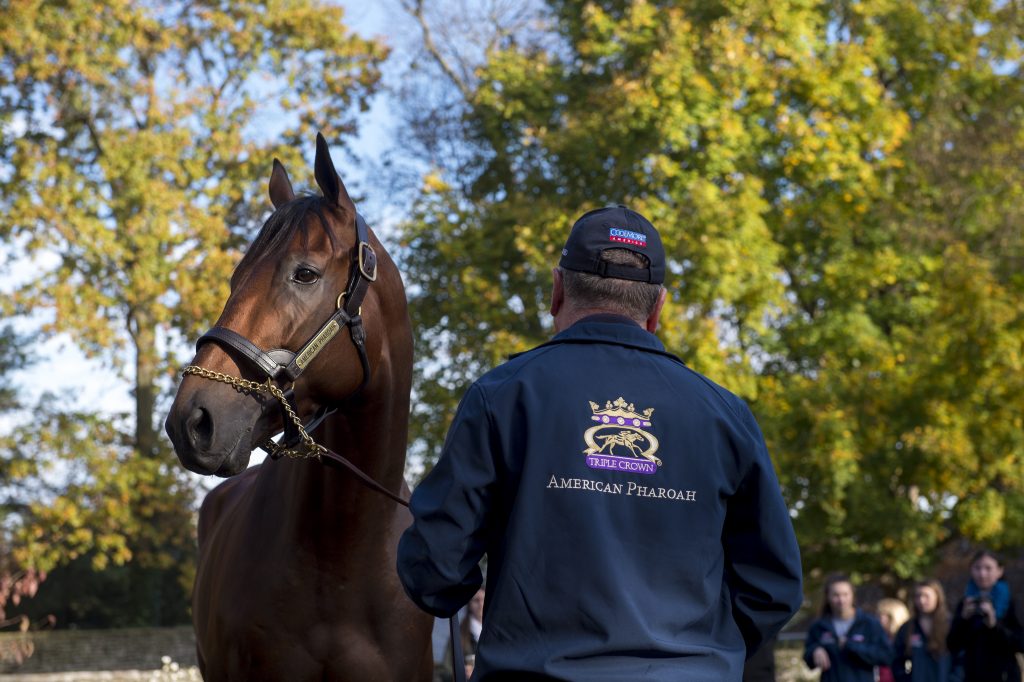 American Pharoah, the first horse to sweep the American Triple Crown in 37 years, has two lots on offer at Newmarket – Photo: George Selwyn

The last lot through the ring on Tuesday evening, this colt a grandson of blue hen Mariah’s Storm.

John Magnier paid $2.6 million for Grade 2 winner Mariah’s Storm at the 1996 Keeneland November Sale and was immediately rewarded when the Storm Cat foal she was carrying turned out to be the ‘Iron Horse’ Giant’s Causeway, subsequently a three-time champion sire for Coolmore.

You’resothrilling herself is now carving out an exceptional stud record as the dam of champion Gleneages, who is already off the mark as a sire, and Irish 1,000 Guineas heroine Marvellous alongside other Group winners Taj Mahal and Coolmore. Another sister, Pearling, is the dam of Irish Champion Stakes hero Decorated Knight.

All in all, it’s a real stallion’s pedigree should this colt make the grade.

Bred by Coolmore, he is the first foal out of his unraced dam and was picked up by Mags O’Toole for just $45,000 as a Keeneland September yearling.

This well regarded £77,000 pinhook is a half-brother to the popular stayer Trip To Paris, himself a celebrated breezer who was sold by Mocklershill for 20,000gns to Federico Barberini at the 2013 Tattersalls Guineas Sale.

Trained by Ed Dunlop, Trip To Paris went on to win six races, including the Gold Cup at Ascot, and run placed another 11 times, notably when second in the Caulfield Cup and third in Irish St Leger.

Further back, it is the family of Distant Relative, a top miler for Barry Hills, and Ezzoud, who thrived over 1m2f to win two renewals of the Juddmonte International for Sir Michael Stoute.

Given this colt is a son of speed influence Kodiac, it will be interesting to see what his optimum trip turns out to be.

The last time Norman Williamson offered a Niarchos-bred at a juvenile sale, the horse in question turned out to be none other than War Of Will, one of the leading candidates for this year’s Kentucky Derby by virtue of wins in the Risen Star and Lecomte Stakes at Fair Grounds.

Time will tell whether this colt – the only youngster catalogued by his sire and bought for €90,000 as a yearling – can follow suit but he is certainly bred to be smart as a half-brother to Grand Prix de Paris winner Erupt and Listed scorer Marie De Medici, herself dam of Group 3 winner Local Time.

Their dam, Mare Nostrum, won the Prix Vanteaux and is a half-sister to Grade 1 winner Aube Indienne.

As you would expect, he boasts a pedigree out of the top drawer. Firstly, he is the sole entry by War Front, America’s most expensive stallion whose list of European standouts includes Declaration Of War, War Command, Air Force Blue and US Navy Flag among many others.

However, he also hails from an exceptional female family that has been cultivated to great effect by Richard and Roisin Henry; he is a half-brother to Pretty Polly Stakes heroine Diamondsandrubies as well as the Group 1-placed You’ll Be Mine, in turn the dam of Eminent, and out of Quarter Moon, winner of the 2001 Moyglare Stud Stakes.

It is also the immediate family of Irish 1,000 Guineas winner Yesterday, while further black type could be on the way via the unbeaten American three-year-old Demarchelier, another grandson of Jude who looked smart in victory for Chad Brown at Keeneland last Friday.

Consigned by Alliance Bloodstock as the property of Christopher Brennan 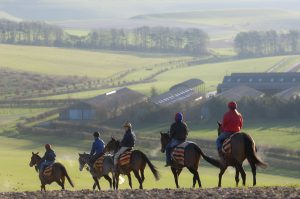 Up Next
New welfare strategy an essential step forward