The European Pattern Race programme, brainchild of that great racing and breeding authority Peter Willett, was inaugurated in 1971. It arrived with no fanfare, and attracted little attention – unsurprisingly, as it was unlikely to arouse much interest in the punter or casual racegoer. 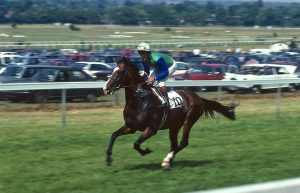 Sadler’s Wells: record as a sire of European Pattern winners about to be surpassed

I confess I was slow to realise the potential of the scheme, but I took enough notice in its first year to compile a list of all the winners of the races staged in Britain and Ireland. Having just become editor of the Bloodstock Breeders’ Annual Review, I felt an obligation to initiate one or two new features, and that list, occupying a couple of pages, would be something different, unlikely to be published anywhere else. It might also have the virtue of proving useful to some readers of the book.

The list duly appeared in two or three volumes, but it quite soon became clear how important an innovation the Pattern had been. I expanded the feature to include all the qualifying races in Europe, and in 1975 came the addition of all the winners in North America’s parallel scheme. A book that aimed to be global in scope could not ignore what had swiftly become significant.

Meanwhile, I had been keeping records for my own interest and use. And mere lists of the names of winning horses were patently insufficient. I wanted the sires of the winners and the successful broodmare sires; better yet, I wanted five-generation pedigrees of those winning horses. And I had to have indexes, annually and cumulatively. While I compiled the current data, I was also back-tracking to gather the relevant information from previous seasons.

I’ve never had a fancy computer programme to help me; the researches and inputting of information are all my own work, so if there’s anything wrong, it’s definitely down to me

It took an age to get up-to-date, but I persuaded myself that once I had achieved that, it would be relatively easy to keep on track. At no time did I envisage that after Irish Champions Weekend in 2017 I would be logging 21 results, compiling five-generation pedigree of the winners, updating files of the successful sires, broodmare sires, and the cumulative indexes. I have never had a fancy computer programme to help me; the researches and inputting of information are all my own work, which means that if there’s anything wrong, it’s definitely down to me.

I don’t want to know if there’s a website where I could obtain all the information I have gathered over 40-plus years, so please don’t tell me if you are aware of one. That would just confirm how the hours I have spent translate into years. I know I’m mad, and I become increasingly cognisant of that fact now that my short-term memory is not what it was. A new pedigree used to lodge in my brain instantly and stay there; nowadays it takes only minutes to become forgotten.

Yet for all that I recognise the expenditure of so much time and effort, and the realisation that my self-imposed sentence of hard labour has deprived me of the opportunity to do a thousand things I might have enjoyed, I can’t say I have any regrets. It’s the same as with all the time I spent as a sales reporter; what kind of a nutter was I to watch people – often the same people – doing their shopping for 33 years? That would amount to a sure recipe for boredom for most.

But the sales enabled me to travel – albeit again watching shopping – to several continents, and to make a host of friends at home and abroad. And while the passage of time means that all too many of those friends are no longer around, I continue to value the memories they generated for me. The plain fact is that I still love the game, and there is no way I could just walk away from it.

So giving up all that time-consuming data collection is not something I’m contemplating any time soon. I still care about what is going on in the industry, I still want to form opinions about the merits and failings of the horses who feature as athletes in the higher echelons of competition, and I’m still fascinated by their breeding, and by those who breed them. I can’t follow the game effectively without doing my own researches.

I suppose the most important of my files relating to the European Pattern is the cumulative record of the sires. And, just as it is difficult to compare the merits of one generation of runners with another, there are problems over comparing the sires of different eras. The Pattern has grown appreciably over the years, with just 243 races and 161 individual winners in year one, whereas 319 horses claimed a share of the honours in 2016, when the schedule stretched to 413 races.

The first stallions to reach three figures for wins by their progeny were Habitat, who wound up with 108, and Northern Dancer with exactly 100; the former’s last qualifying winner was Distant Relative in the 1990 Prix du Moulin, and the latter’s Wajd in the 1991 Grand Prix d’Evry. In their 1980s heyday the scheme ran to a total in the 320s, and much smaller crops were the order of the day. The great little Canadian-bred never had a crop larger than 36, yet was able to wield enormous influence on the breed, especially in Europe. His ratio of stakes winners to foals has, unsurprisingly, never been approached by any horse in the era of huge books.

As I write, there are 14 horses with 100 or more Pattern wins by their progeny, and of the 13 ranking above Northern Dancer, nine are his male line descendants – sons Danzig, Nureyev and Sadler’s Wells, grandsons Danehill, Montjeu and Galileo, and great-grandsons Danehill Dancer, Pivotal and Dansili. Invincible Spirit, another great-grandson, is poised to join the club, having chalked up his 99th win when Music Box won the Sceptre Stakes at Doncaster.

The progeny of Sadler’s Wells amassed a total of 327 Pattern wins, and that score still seemed impregnable at the close of the 2011 campaign. But Galileo has been whittling down his sire’s lead at a phenomenal rate

When I speculated, in February 1990, that Sadler’s Wells had the potential to become the greatest stallion ever to stand in Ireland, I fell short of suggesting that he would head the sires’ list for 13 of the following 14 seasons, but that was how he fulfilled my prediction.

While he was churning out top performers in crop after crop, routinely outscoring all his rivals and stretching his lead, I went so far as to suggest that his record as a sire of European Pattern winners would stand for all time. My crystal ball seems to have malfunctioned on that occasion.

The progeny of Sadler’s Wells, whose fertility finally failed at the age of 27, amassed a total of 327 Pattern wins, and that score still seemed impregnable at the close of the 2011 campaign. But Galileo has been whittling down his sire’s lead at a phenomenal rate – winners of 30 races in 2012, 25 in 2013, 32 in 2014, 29 in 2015, and 39 in 2016. His score for 2017 reached 39 when Capri won the St Leger to bring his cumulative tally to 300, and there were still 90 more races to be contested. You can have my personal guarantee that by this time next year Galileo will have overhauled his sire by a substantial margin. He is already ahead of Sadler’s Wells in terms of wins at Group 1 level.

So who are the members of the 100-plus club who are not male line descendants of Northern Dancer? The aforementioned Habitat, whose sons at stud proved terribly disappointing, and Riverman, who fared rather better in that respect, though without establishing a distinct branch of his own, both traced back to Nearco, Northern Dancer’s paternal grandsire.

Dubawi, now up to fifth in the all-time list, represents the line of Mr Prospector. He will soon wrest fourth place from the great outcross sire Monsun, who defied his unfashionable pedigree and gave new life to the apparently moribund Blandford line.

Up Next
Groomed for success on Dansili quest