It is plainly the duty of the representative body of racehorse owners to protect the interests of its members in any way it can. This is why the ROA must support the BHA’s stance in putting the ethics of bloodstock sales under scrutiny as it reviews the industry Code of Practice that was originally put in place at the start of 2009.

A lot has happened in nearly nine years since that Code was introduced and, whether we like it or not, our lives are now surrounded by more regulation and a greater emphasis on transparency. You only have to look at legislation in such areas as banking, insurance and all selling practices to see how protective of the consumer the law has become.

If we believe the bloodstock market should stand comparison with other global market places in terms of integrity, then there appears to be quite a lot of cleaning up to do

It is no longer good enough to respond to an accusation that something is unethical or might represent foul play with a shrugging retort ‘that’s how it’s always been done’. Perpetuating such an attitude at bloodstock sales not only risks increasing the number of owners who become disenchanted with the sport, but surely hastens the day when the media conducts a high-profile investigation into what goes on at the sales or, even worse, a court case shines a very disparaging light on the whole sales world.

The fact that the BHA does not have legal jurisdiction over activity at the sales is not a reason for the governing authority of the sport to keep silent when it has legitimate concerns. As the regulator of British racing, it has a duty to ensure the industry over which it presides adheres to the highest possible standards of integrity, whether it be on the racecourse on in the sales ring.

Those standards may well have improved markedly at bloodstock sales over the decades, but there is clearly more room for improvement. How could you argue otherwise when there is much evidence of conflicts of interest and a frequent flouting of the terms within the existing Code of Practice?

It is common knowledge that the practice of paying ‘luck money’ continues to be widespread at the sales. If a financial arrangement between the buyer’s agent and the vendor is made transparent to all parties, well fine, but it frequently isn’t. The code says ‘luck money’ should be entirely voluntary but vendors are sometimes fearful of being ostracised if they refuse to play the game.

There are other dubious practices. One of the most common involves vendors bidding for their own horses to inflate the sales price. It is not illegal to do this but you have to wonder about the ethics of this, especially when the price goes beyond the reserve placed on the horse. The idea that the auctioneer has to announce when a vendor or their representative is bidding on their own horse would certainly improve transparency.

If we believe the bloodstock market should stand comparison with other global market places in terms of integrity, then there appears to be quite a lot of cleaning up to do. Sotheby’s, for example, do not permit the payment of ‘luck money’ or the equivalent, while their rules are unequivocal in spelling out that vendors or their agents must not bid for their own property.

It is not good enough to say that because few complaints are received, everything is as it should be. This ignores the fact that those new to the sales ring environment are largely ignorant of the practices that go on and many of those on the inside who often do not like what they see are fearful of rocking the boat.

‘Not only justice done; justice seen to be done’ is a sentiment that should be applied to the deliberations between the BHA, sales companies and horsemen, so any future test of public scrutiny can be passed and everybody involved can sleep more comfortably. 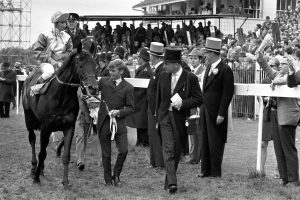 Up Next
Remembering Blakeney