On the hunt for the next star jumps sire

Instead of a crystal ball, I am turning to France-Galop’s stallion statistics in an attempt to pinpoint the next French stallions likely to make an impact on the British jumping scene. 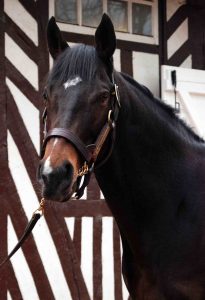 Soldier Of Fortune: new at Coolmore

Conveniently, these statistics include a column which gives the year that each stallion covered his first mares. The final table for 2015 reveals that two stallions – Coastal Path and Soldier Of Fortune – managed to reach the top 25, even though they covered their first mares as recently as 2010. That start date means that they had only two crops old enough to race over jumps in 2015.

The higher ranked of the two was Coastal Path, a Juddmonte-bred who ran out of stamina when strongly backed to end Yeats’s run of Gold Cup successes in 2008. Prior to that defeat Coastal Path had won all six of his starts in France, including four consecutive Group races at around 15 furlongs. Although kept in training as a five-year-old in 2009, the son of Halling was injured after only two starts and was retired.

Coastal Path will do well to match Martaline’s achievements, but he is in with a chance

Fortunately, Coastal Path also had the attraction of being an imposing, good-looking member of a flourishing family. His second dam Bahamian is also the second dam of such celebrities as Oasis Dream, Beat Hollow and Zenda (now the dam of Kingman), but Coastal Path’s branch of the family is renowned for its stamina. His dam Coraline visited Linamix to produce those talented brothers Martaline and Reefscape, the former a Group 2 winner over a mile and three-quarters and the latter a winner of the Group 1 Prix du Cadran over two and a half miles.

Sadly Reefscape’s stallion career was severely blighted by fertility issues, but his handful of runners included L’Unique, a Grade 1 winner over hurdles at Aintree. Martaline, of course, has had no such problems and has done so well at the Haras de la Reboursiere et de Montaigu in Normandy that he finished second to Poliglote on France’s 2015 list of leading sires of jumpers. His fee is now as high as €10,000.

He may be best known in Britain for his top-notch Cheltenham Festival winners Dynaste and Very Wood, but he has also been very ably represented in France by such as Chimere du Berlais (Grade 1 Grande Course de Haies des 3 Ans in November 2015) and Kotkikova (a very smart chaser who won nine of her first 12 starts over jumps).

Coastal Path will do well to match Martaline’s achievements, but he is in with a chance. Starting out at a fee of €3,500 at Haras de Saint-Voir in 2010, he is standing the 2016 season alongside such as Rail Link, Fuisse and Saddler Maker at Haras de Cercy – his base since 2013 – at a price of €2,800. He has been covering a mixture of thoroughbreds and AQPS mares, and has received reasonably strong numerical support by French standards. He has 43 first-crop foals born in 2011, followed by 44 reported foals in his second crop, 32 in his third, 68 in his fourth and 52 in his fifth in 2015, giving him a total of 239.

He had 37 runners over jumps in 2015, for 13 winners of 19 races, and among them were Bosseur, a middle-distance Flat winner who won the Listed Prix Rohan on his debut over hurdles. Bosseur was later placed in several Graded races, notably taking second place in the Grade 1 Prix Alain du Breil. Coastal Path’s other Listed winner over hurdles was the filly Coastal Beach (Prix Wild Monarch at Auteuil). Another filly with plenty of talent is Buche de Noel, who won her last four completed races over hurdles and fences.

Significantly, Buche de Noel has now been transferred to England, to Jamie Snowden’s yard. Willie Mullins also seems to like Coastal Path’s progeny, as Bello Conti won comfortably at Clonmel on his hurdling debut and Bacardys, a winning point-to-pointer, won a Leopardstown bumper at the end of 2015.

Soldier Of Fortune is interesting, partly because he’s a son of the great Galileo. As there is almost a surfeit of Group-winning entire sons by the perennial champion sire, only those with the most fashionable pedigrees – and the most speed – are likely to be chosen for a stallion career on the Flat. Coolmore’s National Hunt team already included three of Galileo’s Group-winning sons, with the St Leger second Mahler now the most expensive of them at €5,000. Coolmore recently purchased Montjeu’s son Walk In The Park, responsible for exciting Irish jumpers Douvan and Min, from France.

Shade Oak Stud must be delighted to have added Telescope to its roster. With Galileo as his sire and Darshaan as his broodmare sire, Telescope represents the best middle-distance bloodlines. Although a Group 1 win eluded him, Telescope had the talent to match his bloodlines, as he demonstrated with his seven-length success in the Hardwicke Stakes and his second to Taghrooda in the King George.

Another of Galileo’s Group-winning stayers, the Group 3 Bahrain Trophy winner Shantaram, is available for only €1,000 at Coolagown Stud. Spare a thought, too, for Libertarian, whose efforts helped Galileo’s Derby-winning son New Approach make such an eye-catching start. After winning the Dante, Libertarian was second in the Derby and fourth in the St Leger. Another with a dam by Darshaan, Libertarian is another  deemed to have too much stamina for a Flat stallion, but this big horse should have a bright future at Knockhouse Stud, former home of the highly successful Roselier.

To return to Soldier Of Fortune, this winner of the Irish Derby and Coronation Cup hasn’t made a dream start as a sire of Flat performers; although he has a Grade 1 winner in South America, there’s been nothing better than a few Listed winners from his first three French crops (one is smart all-weather horse Fire Fighting).

It promises to be a different story over jumps. Soldier Of Fortune had 13 winners over jumps in France during 2015, including the Auteuil Listed winner Carlita du Berlais. Three others were placed at Graded or Listed level.

Soldier Of Fortune has every right to excel as a sire of jumpers. The grandsires of his dam, the Flat Listed winner Affianced, are Busted and Lord Gayle, two stallions whose descendants have made a major impact on the National Hunt world. Then there’s the fact that Soldier Of Fortune is bred along similar lines to Sholokhov (a half-brother to Soldier Of Fortune’s dam, sired by Galileo’s sire Sadler’s Wells). Sholokhov, of course, has been represented by jumpers of the calibre of Don Cossack in Ireland and Esmondo in France.

Before leaving the topic of up-and-coming jumping sires in France, the 2015 top ten features the highly accomplished Irish chaser Nickname in a very creditable sixth. Nickname died in 2011 and his early death looks all the more unfortunate after the 2015 exploits of the likes of Corscia, As d’Estruval and Mon Nickson in France and Le Mercurey, Gwencily Berbas and Aurore d’Estruval in Britain and Ireland.

French breeders have his half-brother No Risk At All standing with Martaline at Haras de Montaigu. Unlike Nickname, No Risk At All never faced obstacles but he earned a Timeform rating of 121 at five, when he won two Group 3s over ten furlongs. His appeal as a potential sire of jumpers is heightened by the fact his sire, My Risk, is also responsible for Sire de Grugy.

Up Next
Knights on different Turf