As I have explained in the past, it is tempting to expect too much too soon of a stallion in his secondary role as a sire of broodmares. Achieving recognition in this sector tends to owe a lot to numbers, which grow exponentially as more and more of daughters become producers. This helps explain why only one of the champion broodmare sires of the last 25 years was younger than 20 at the time (the exception being Rahy, who was only 15 in 2000, when he owed the title almost entirely to Giant’s Causeway, the first foal of his first-crop daughter Mariah’s Storm).

It is encouraging, though, that the 2020 broodmare sire list, nearing the end of June, features several stallions which are still active, not least the evergreen Pivotal, who is bidding for his fourth successive championship. Highest ranked of the stallions born in the 21st century is the 20-year-old Oasis Dream in fifth place, but make a note that the much-missed Shamardal, who was born in 2002, is as high as sixth, while Dubawi, another born in 2002, also makes the top ten. The 20-year-old Exceed And Excel, in 17th place, is another who looks sure to achieve greater prominence over the next few years.

Oasis Dream took longer than I expected to come up with his first Group 1 winner as a broodmare sire, with the Scat Daddy colt Sioux Nation ending the wait when he landed the 2017 Phoenix Stakes at the Curragh. However, Oasis Dream’s broodmare daughters are now gathering a head of steam and the Banstead Manor Stud stalwart enjoyed a Group 1 double in the space of three days in mid-June.

The 2019 Phoenix Stakes winner Siskin initiated the double when his fine acceleration got him out of trouble in the Irish 2,000 Guineas. In doing so, Siskin maintained his unbeaten record and so did Tawkeel, when this impressive daughter of Teofilo drew five lengths clear in the Prix Saint Alary. Altogether Oasis Dream’s daughters have produced 28 Group winners and a total of 47 black-type winners

There was always good reason to think that Oasis Dream had what it takes to become an influential sire of broodmares. Besides possessing the precocity required to become a champion two-year-old and the speed to train on into a champion sprinter, he is a son of Green Desert. The dozen Group 1 winners out of Green Desert’s daughters ranged from sprinters such as Pipalong and Total Gallery through milers of the calibre of Makfi and Mustashry to middle-distance performers such as Almutawakel (Dubai World Cup), Was (Oaks) and Bracelet (Irish Oaks).

It was likely that Oasis Dream’s daughters would prove similarly versatile in view of the fact that the stallions responsible for Oasis Dream’s first three dams were the outstanding middle-distance performers Dancing Brave, Mill Reef and Busted.

Midday, the wonderfully tough mare from Oasis Dream’s second crop, began her broodmare career with a 2012 visit to Galileo, who had sired the Oaks-winning Was from a Green Desert mare. At the same time, Galileo’s unbeaten son Teofilo was chosen as the mate for Dream On Buddy, a winning miler by Oasis Dream. Although Midday’s son Midterm was to prove frustrating, he was good enough to become a Group 3 winner in both Britain and Australia, while Dream On Buddy’s son Twilight Payment has proved to be a smart and durable stayer in Ireland, where he has won at Group level as a six- and seven-year-old.

These two proved to be the forerunners of a strong team produced by daughters of Oasis Dream to Galileo and his sons. Galileo’s figures now stand at 16 winners from 19 starters out of Oasis Dream mares, with the latest of his three black-type winners being the Group 3 winner Lancaster House, who has won four of his five starts. The Juddmonte operation has its fingers crossed that this Galileo-Oasis Dream cross will improve its statistics further via Midday’s filly Noon Star and Joyeuse’s son Maximal, both of these two-year-olds being in training with Sir Michael Stoute.

Teofilo now has an impressive total of four black-type winners among his 18 foals of racing age out of Oasis Dream’s daughters. In addition to the potentially high class Tawkeel, Twilight Payment has been followed by the Italian Group 3 winner Brasilian Man and the Australian Listed winner Aktau. There is also a yearling brother to Tawkeel to look forward to.

Of course, Teofilo ranks among the 15 Group 1 winners sired by Galileo from Danehill’s daughters, as does the mighty Frankel. As Oasis Dream and Frankel are both members of the Juddmonte stallion roster, it was natural that plenty of Oasis Dream’s daughters should visit Frankel and they have so far supplied three black-type winners, including last year’s French winners Obligate (Group 2 Prix de Sandringham) and Delaware (Group3 Prix Daphnis).

The Frankel-Oasis Dream combination will be tested further over the next few years, as there are half a dozen three-year-olds, ten two-year-olds and more than a dozen yearlings bred this way. Two of the two-year-olds – Side Shot, a half-brother to Shutter Speed, and Senita, a filly out of Midday’s sister Atone – are with John Gosden, while Beheld, a filly out of the speedy Tendu, is with Roger Charlton. There is also Buhoor, a Shadwell filly very closely related to Tawkeel.

When assessing what might suit a new stallion, many breeders understandably fall back on the idiom “like father, like son.” Unfortunately, there are plenty of instances where the sons fail to match their fathers’ achievements, but the early signs are that Dubawi’s tremendously promising stallion son Night of Thunder is truly a chip off the old block.

When Juddmonte first sent a daughter of Dansili to Dubawi the reward was that very smart colt Time Test, and other breeders also reaped rich rewards from this cross, thanks to the Group 1-winning Nezwaah and the Group 2-winning Glorious Journey (who sold for 2.6 million guineas as a yearling).

So, when selecting a mare to visit Night of Thunder in his first season, Juddmonte selected Dansili’s daughter Shared Account, who had the added appeal of having plenty of size for the 15.3-hands Night of Thunder. The resultant filly, Pocket Square, duly became one of three two-year-old Group winners for the Kildangan stallion when she won the Group 3 Prix des Reservoirs.

It looks as though the recipe has worked again in the form of the two-year-old Qaader. Named a ‘Thoroughbred Daily News Rising Star’ when he scored by four lengths on his debut at Newbury, Qaader confirmed his promise when a length second to the unconsidered Nando Parrado in the Group 2 Coventry Stakes. There are only nine horses of racing age bred this way but four of the five which have raced have won. 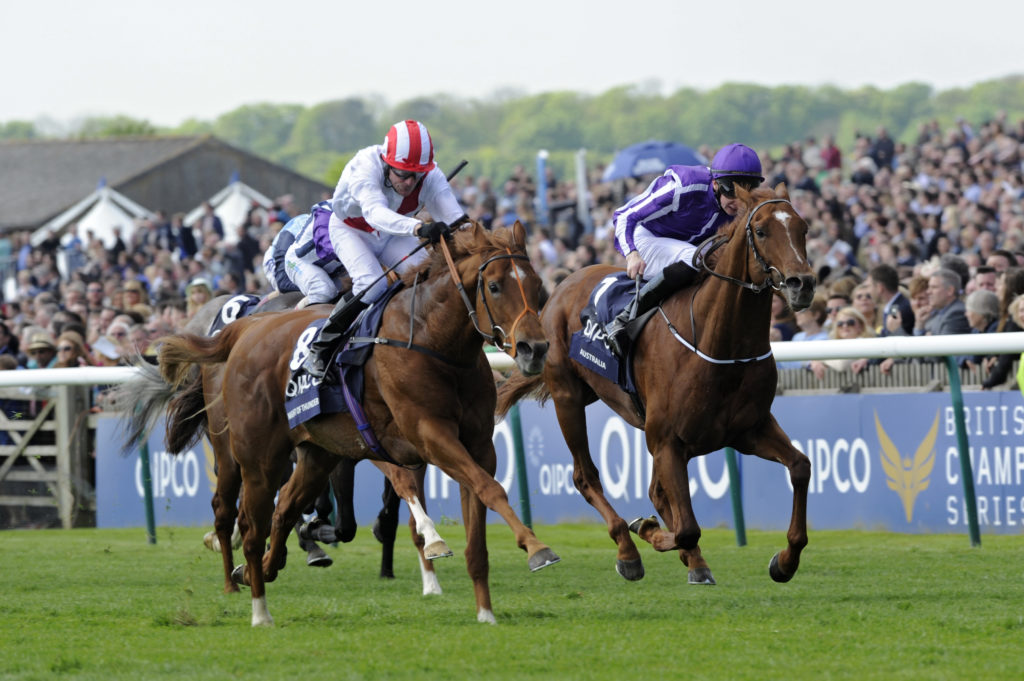 And Barathea, whose daughters have produced no fewer than three Group 1 winners to Dubawi – Monterosso, Hunter’s Light and Arabian Queen – is the broodmare sire of Night of Thunder’s Group 3-winning German filly No Credit Limit.

Expect to see more good winners from this Night of Thunder-Montjeu combination. Dubawi’s 12 winners from 14 starters out of Montjeu mares include three black-type winners, headed by that fine mare Journey and the Oaks third Lady of Dubai.

Talk of Night of Thunder inevitably revives memories of his 2,000 Guineas victory over Kingman and Australia. Six years on, this trio have already been represented by a total of 25 Group winners which raises the question of whether the 2014 2,000 Guineas will ultimately prove as important to the bloodstock world as the 1984 Prix du Jockey-Club, which featured Darshaan, Sadler’s Wells and Rainbow Quest.

A little bit of patience may be required before we see Night of Thunder at the height of his powers, as his second, third and fourth crops all number fewer than 100 foals. He may be good enough, though, to shrug off any numerical disadvantage, especially if it is indeed a case of like father, like son – Dubawi’s third and fourth crops respectively numbered only 78 and 61 foals and the 78-strong crop contained eight Group winners, including two at Group 1 level

In this topsy-turvy season, the traditional order of events has been shuffled or even reversed, with the Irish Derby being followed by the Derby and then the Dante Stakes. But one thing hasn’t changed, as the Irish Derby victory of Authorized’s son Santiago reminded us – Montjeu and his descendants remain one of the major influences on the world’s main mile-and-a-half contests, especially the Derby and Irish Derby.

Montjeu sired four winners of the Epsom Classic in the space of eight years, thanks to Motivator, Authorized, Pour Moi and Camelot. Pour Moi himself sired the 2017 winner in Wings of Eagles and, at the time of writing, the betting for the 2020 Derby is headed by English King, a son of Camelot.

Montjeu’s impact on the Irish Derby has been similarly deep, with victories by Hurricane Run, Frozen Fire, Fame And Glory and Camelot, again in the space of eight years. Now Santiago has become the second grandson of Montjeu to take the Curragh prize, two years after it fell to Camelot’s son Latrobe. For good measure, Montjeu also sired Scorpion, Montmartre and Gallante, winners of the mile-and-a-half Grand Prix de Paris, arguably France’s nearest equivalent to the Derby.

There were also two winners each of the Irish Oaks and the AJC Australian Derby. Montjeu’s ability to impart stamina to his progeny also resulted in winners of the St Leger equivalents in Britain, Ireland and France, plus two in the Gold Cup and one in the Melbourne Cup.

Montjeu’s achievements may be overshadowed by those of the extraordinary Galileo, who is capable of siring top winners over a wider range of distances, but is mustn’t be forgotten that Montjeu died at the comparatively early age of 16, having usually covered a lot fewer mares each year that Galileo. His total of northern hemisphere foals stood at fewer than 1,100 foals, whereas Galileo has well over 2,300 northern hemisphere foals of racing age.

It came as something of a surprise to me that the Coolmore partners are campaigning a son of Authorized, a somewhat unfashionable stallion who has spent his breeding career until recently under the Darley banner. But Santiago is a reminder that fashion can be irrelevant. Authorized began his career with crops numbering 119, 90 and 127, and there were two Group 1 winners – Seal of Approval and Ambivalent – in his first crop and another – the Australian star Hartnell – in his third. 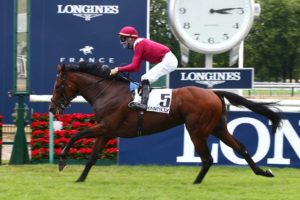 Up Next
Mishriff adds greater lustre to Rafha's legacy