Sharing knowledge with fans can only help racing
Exclusive Columns

Old age does not come unaccompanied, and among the many unwelcome manifestations is short-term memory loss. In common with many others of my generation I have difficulty remembering what I did yesterday, or whatever happened to the specs I was wearing ten minutes ago.

But events from way back linger. Old entries in the memory bank lodged permanently. The phrase ‘dim and distant past’ is inappropriate; what is distant in time actually remains as vivid as the original experience, and that recurrent thought surfaced yet again as I took down the 2016 calendar and replaced it with one for 2017.

Blimey, is it really 50 years since that season which provided so much that it’s impossible for me to forget?

I was a humble junior sub-editor in the racing department of the Press Association, and across the desk sat a rather more experienced chap called David Chapman, who came from a privileged background and was apparently enhancing his prospects further by some successful punting. He was prospering to a large extent by virtue of bets on horses trained by Noel Murless, and he bored me and his other colleagues rigid with tales of his latest windfalls courtesy of inmates of the Warren Place stable. 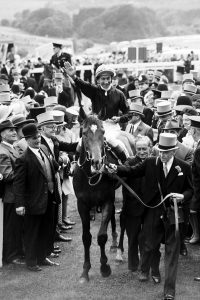 Sure, the yard had thrived in 1966 and seemed to be especially strong in the two-year-old department, a fact which Chapman crowed about constantly. In the pub downstairs he pursued the familiar theme, asking me what were the odds against a Murless sweep of the 1967 Classics. I reckoned that 100-1 would be about right, which naturally prompted him to enquire whether I would lay him such a bet.

Drink tends to cloud anyone’s judgement, and while I was sufficiently compos mentis to recognise that it would be folly to do that, I contrived to do something dafter.

Foolishly emboldened by the knowledge that the Classics were always extremely competitive, I offered the thought that it was probably 100-8 against Murless winning any one of them, let alone all five. He leapt in sharply, urging me to put my money where my mouth was, and I shook hands on it: £100 to 8. Well, anything to shut him up.

So a few months later, there I was on the press stand at the Rowley Mile, willing the Murless colt Royal Palace, 100-30 joint-favourite, to get beaten in the 2,000 Guineas. He nearly did, but my cheering for Taj Dewan throughout the final furlong proved to no avail; Royal Palace got home by a short head. I could only ask for time to pay. After all, I was taking home no more than £12 a week, and I had to eat – and drink, of course.

If Royal Palace hadn’t done it, my bet would have been lost on the following day, when Fleet proved a ready winner of the 1,000 Guineas to complete a Warren Place Classic double. Murless was well on the way to a record-breaking season.

By Derby day I had still to settle the debt, while Chapman was confidently predicting that he would collect on his ante-post wager on Royal Palace to win the Triple Crown, a bet he had struck thankfully not with me but a properly licensed bookmaker.

My most vivid recollection of that Derby concerns Richard Baerlein, racing correspondent of The Observer, who had made scathing remarks about Ribocco, one of the top juveniles of 1966 but already a three-time loser at three – in the Craven Stakes, the Dee Stakes and the Lingfield Derby Trial, fitted with blinkers on the last-named occasion. All the evidence, Baerlein asserted, indicated that Ribocco was irresolute, lacked stamina and hated starting stalls, which were being used for the first time in the Epsom Classic.

Always known for his forthright opinions, Baerlein told his readers he would jump off the Press Stand if Ribocco were to win the Derby. Unlike the present arrangements, whereby the press are expected to watch the Derby on a television screen at ground level, in those days we were favoured with a splendid pitch up several flights of stairs, so a jump from that height could only have been fatal.

I had half an eye on Baerlein as Ribocco, under a canny Piggott ride, moved stealthily up the centre of the course in the straight, evidently full of running. But Royal Palace was also going strongly and a couple of flicks from George Moore’s whip were sufficient to carry him clear – a life-saver for the Observer scribe and a performance that looked a good omen for Chapman’s Triple Crown wager.

In fact, nobody doubted that Royal Palace would now complete the treble. He had perhaps been fortunate that no tip-top miler had contested the Guineas, but he had proved his dominance over his division at Epsom, and his pedigree, by Ballymoss out of a high-class Solar Slipper mare, guaranteed that he would have ample stamina for the Doncaster test. He would have a warm-up in York’s Great Voltigeur Stakes before emulating Bahram, the latest Triple Crown hero, all of 32 years earlier.

But what seemed so straightforward in June and July became less so in August. Royal Palace knocked a joint over the weekend before York and Murless had to go easy on him. Perhaps that was no big deal; there were still three weeks before the final Classic, and that might be enough to restore the colt to full fitness. As the big day – Wednesday, September 13 – drew nearer, the trainer let it be known that he would make a decision about the St Leger after a gallop on the preceding Saturday.

I remember that day well. It was down to the Press Association to relay the all-important news, and, inevitably, it was David Chapman who took it upon himself to phone Murless for the verdict at 10am. The call was brief, and from across the desk I learned the apparently glad tidings that the colt had worked well. “But did he actually say Royal Palace would run?” I asked, only to be ridiculed for such a dumb question, as Chapman tapped out his story and sent it on its way to news media far and wide.

At 11am Weatherbys issued the four-day declarations for the St Leger, and Royal Palace’s name was not among them. Chapman’s Triple Crown wager was lost, and he had to send out a revised story to the effect that while Royal Palace had worked well, he had not worked well enough to suggest he could be at his peak for a potentially gruelling contest in four days’ time.

Of course, there was no reason to doubt that a fully-fit Royal Palace would have won the St Leger, in which his markedly inferior stable -companion Hopeful Venture finished an honourable second to the formerly much-maligned Ribocco.

He did have one more run that year but gave a sub-par performance as third in the Champion Stakes behind Reform and Taj Dewan. We had to wait until 1968 to see him at his peak again, unbeaten in five efforts, including the Coronation Cup, the Eclipse and the King George.

So the wait for a successor to Bahram was prolonged, and we were not to know that he already existed, improbably grazing in a paddock on the other side of the Atlantic.

My personal memories of half a century ago remain vivid, but now we should all be celebrating the 50th anniversary of the birth, in February 1967, of Nijinsky, the colt who achieved the target that Royal Palace was forced to miss, and who remains Bahram’s only successor to date.

It was my privilege to witness all of Nijinsky’s Classic triumphs, and to retain the memory of one of the finest thoroughbreds I ever saw in action. Unfortunately, David Chapman was not around to share that privilege. His luck as a punter ran out, and a week before Nijinsky’s debut he committed suicide.

Up Next
Sharing knowledge with fans can only help racing