No Nay Never is in the midst of an excellent season with his juveniles. Dr Statz runs the rule over his success

Now with five crops at the races, Coolmore’s No Nay Never looks set to carry on the high standards set by other veteran speed stallions such as Oasis Dream, Invincible Spirit and Dark Angel, who have ruled the roost for the past decade. Like Oasis Dream – and indeed many other speed sires – this fast son of Scat Daddy is capable of getting the odd high-class horse beyond a mile, but it is the quality of his progeny performances at up to a mile that really stand out.

Currently, he is atop the leading European juvenile sires list by earnings and by number of individual stakes winners and Group winners. This latest achievement is really no surprise, given the sheer quality of his latest crop of juveniles. With Little Big Bear, he has found a star two-year-old, one that may already be championship material at whatever distance his connections decide to pursue.

The big colt’s performance in the Group 1 Phoenix Stakes will have no doubt made it abundantly clear to trainer Aidan O’Brien that he genuinely does have that rare mix of pace and stamina to either stay at six furlongs or move up to seven. Timeform already rate Little Big Bear 126p, a mark that would make champion two-year-old in most years. In fact, only Pinatubo (134), Frankel (133p), Dream Ahead (129), Air Force Blue (128p), New Approach, Johannesburg, Lady Aurelia and Too Darn Hot (all 127) have been rated higher this century.

Little Big Bear is only one of six quality juvenile Group winners for his sire this term. Four are trained at Ballydoyle and include, like Little Big Bear, another Royal Ascot scorer in Meditate, a filly who remained unbeaten when taking the six-furlong Group 3 Albany Stakes having earlier scored in a Group 3 at Naas, as well as Group 2 winner Aesop’s Fables.

Then we have the Ballydoyle team’s Blackbeard, who has already had eight starts but is still progressing, as his recent successes in the Prix Morny and Middle Park Stakes would suggest. The Richard Hannon-trained Trillium graduated from a maiden success on her second start to Group 3 winner on her third, taking Goodwood’s Molecomb Stakes, while the Richard Fahey-trained Midnight Mile followed a Doncaster maiden success with victory in the Group 3 Oh So Sharp Stakes at Newmarket on October 7.

These youngsters have been set a very good example by their sire’s excellent daughter Alcohol Free, who reminded us of her versatility this summer by taking the Group 1 July Cup, having also scored at the highest level over a mile earlier in her career, winning the Coronation Stakes and Sussex Stakes. From No Nay Never’s third crop, she has done a sterling job keeping her sire’s name in lights, while we waited for his better-bred two-year-olds to arrive on the scene.

No Nay Never’s current youngsters are from his first €100,000-plus crop, so this surge in his fortunes cannot have been unexpected. That said, it is still mightily impressive to have had so many young Group winners on the board by late summer, all of whom seem to be progressive types. Hiking his fee from €25,000 to €100,000 was a bold move even allowing for the favourable impression created by No Nay Never’s first two crops.

But breeders seemed to agree and the Coolmore stallion benefitted accordingly with a book or mares vastly superior to what he had previously attracted.

Moreover, moving him up to €175,000 a year later has resulted in even more top-class pedigrees among his current yearlings. So there will be plenty of high prices paid for his yearlings this autumn, while it is unlikely there will be many sold for as low as the €40,000 that Jeff Smith paid for Alcohol Free as a foal. The good news for potential buyers is that all of No Nay Never’s best ten racehorses ranked by Timeform rating have been sourced at public auction, including Little Big Bear, who was a €320,000 Goffs graduate.

No Nay Never’s stakes winner strike-rate is 9.1 per cent from runners, again an excellent score for a sire that plies his trade at the ultra-competitive speed end of the stallion spectrum. For good measure, this score is well ahead of the 5.3 per cent achieved by his progeny’s siblings. Even more impressive is his strike-rate from elite mares, which stands at 12.2 per cent stakes winners and 8.2 per cent Group winners. Given that there are many more such well-bred horses in the pipeline, No Nay Never’s future looks very bright indeed. 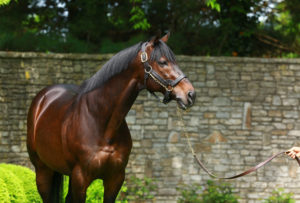