Racing must keep calm and carry on after Brexit
Exclusive Columns

After the recent exploits of Highland Reel, Minding and The Gurkha, you’ll hardly need me to tell you that Galileo’s stellar career as a stallion has become highly dependent on his progeny out of mares by Danzig’s son Danehill and by Danehill’s son Danehill Dancer.

The extent to which these twin nicks are dominating the picture is made clear by the fact that they jointly account for more than 300 of Galileo’s 2,340 foals of racing age.

We therefore shouldn’t be surprised that Danzig-line stallions have represented the first line of attack for many of the breeders lucky enough to own a broodmare daughter of Galileo (including more than 160 daughters registered with the Australian Stud Book). No fewer than 15 of the 20 stallions with the most foals out of Galileo mares are members of the Danzig line, with Danehill’s sons being especially prominent.

There is every chance, though, that the Danzig-line horse destined to hit the headlines with his progeny out of Galileo mares is War Front

The Green Desert branch also figures prominently, thanks to Oasis Dream (34 foals), Invincible Spirit (31), Lawman (23) and Cape Cross (20). No doubt the one to watch from this line is Green Desert’s grandson Paco Boy, whose five foals feature Galileo Gold and the useful Imperial Aviator.

There is every chance, though, that the Danzig-line horse destined to hit the headlines with his progeny out of Galileo mares is War Front, who has developed into Danzig’s rightful heir at Claiborne Farm.

This War Front-Galileo cross is still in its infancy, with only five foals of racing age, all two-year-olds of 2016. The first to race was Roly Poly, a daughter of the excellent Misty For Me, who recorded four Group 1 successes at up to a mile and a quarter. Roly Poly has so far raced only over five and six furlongs, winning three of her six starts including the Group 3 Grangecon Stud Stakes and Group 2 Duchess of Cambridge Stakes.

The next to appear was the colt Leo Minor, whose dam, Kissed, was a Listed winner over a mile and a quarter. After being beaten over seven furlongs on his first two starts, Leo Minor was dropped back to six at Naas at the start of August, where he held on to record his first success.

Leo Minor’s rider Seamie Heffernan made some post-race comments which may prove to be significant.

He said: “I must tell him [Aidan O’Brien] that he was running over the wrong trip! He’s come forward from his two runs, and speed will be his game. It’s unusual for one out of a Galileo mare to show that much speed.”

An ability to inject extra speed must, of course, look like the gold at the end of the rainbow when Galileo’s mature progeny have an average winning distance as high as 11.3 furlongs.

There are three more War Front two-year-olds out of Galileo mares. Shadwell splashed out $1,450,000 for one of them as a yearling. Named Intisaar, this filly is out of the useful Betterbetterbetter, a close relative of those fine fillies Yesterday and Quarter Moon. Intisaar has gone into training with John Gosden. Another of the five is Upfront. This filly out of the Group 2 winner Up was sold for $800,000 as a yearling at Keeneland’s 2015 January Sale. Her dam was sold for $2,200,000 at the same sale, back in foal to War Front. The quintet of two-year-olds is completed by Old Time Waltz, of whom more later.

There will be more chances in the coming years to see whether this cross can build on its promising start. It will be a major setback to the various Coolmore partners if it doesn’t prove a fertile source of important winners, as they have invested heavily in committing many of Galileo’s most talented daughters to War Front. War Front’s fee rose to $150,000 in 2014 and 2015, before reaching $200,000 this year – a figure bettered in the US only by Tapit.

Here is a lengthy (but not complete) summary of future flagbearers for the War Front-Galileo cross. Roly Poly has a yearling brother and weanling sister, whereas Leo Minor has a yearling sister and a weanling brother. Misty For Me and Kissed were also returned to War Front in 2016. Another visitor was the Irish 1,000 Guineas winner Marvellous, whose first foal is a 2016 War Front filly, and War Front was also selected as the first mate for Galileo’s Yorkshire Oaks winner Tapestry (whose foal will be inbred 2 x 4 to Danzig).

Together, winner of the Grade 1 Queen Elizabeth II Challenge Cup at Keynesian, is another Galileo mare regularly beating a path to War Front’s door. She already has three foals by him, the eldest being the two-year-old Old Time Waltz. Together visited him again in 2016, as did the maiden Together Forever, winner of the Group 1 Fillies’ Mile. 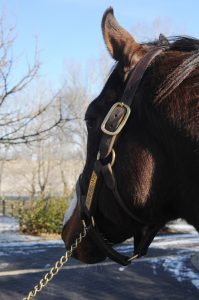 Wedding Vow, runner-up in the Group 1 Nassau Stakes, was another maiden covered by War Front in 2016, as were Magician’s Group 1-placed sister Outstanding and The Gurkha’s sister Queen Nefertiti.

This recurring theme continues among the Galileo broodmares which became Group winners for Aidan O’Brien.

Oaks winner Was has a yearling filly, a weanling colt and was bred back in 2016. Magical Dream, a Group 3-winning sister to the high-class Found, has also visited three times, with the first resulting in a yearling colt. Other three-time visitors are Say, a Group 3 winner in Ireland, and Moth, who was third in the 1,000 Guineas and fourth in the Oaks.

Aloof, a Group 3 winner out of that high-class sprinter Airwave, was sold for $3,900,000 in November 2014 while carrying her first foal, a filly by War Front. Her new owners immediately returned her to War Front and got another filly.

Before leaving the topic, it mustn’t be forgotten that it is by no means essential to follow the Danzig route in the quest to produce a smart winner from a Galileo mare. Le Havre sired this year’s dual French Classic winner La Cressonniere from one and Dubawi has also enjoyed Classic success, siring Night Of Thunder.

Dubawi’s 16 foals also include the very smart Dartmouth, and there have also been good winners by First Samurai, Shamardal, Street Cry and Monsun, so breeders should be careful not to develop tunnel vision.

Up Next
Racing must keep calm and carry on after Brexit