Kauto Star. Denman. Master Minded. Big Buck’s. At one point, not that long ago, it seemed as if every outstanding jumps horse in training shared the same postcode, that of Ditcheat handler Paul Nicholls. His set-up seemed simple enough. Find outstanding runners for big- spending owners, train them to the minute using top-class facilities, then win every Grade 1 and big race going. So where did it all go wrong?

That might seem a daft question, as Nicholls has continued to send out winners at a phenomenal rate – this season he will record his 18th consecutive century – and in this month’s cover star, Clan Des Obeaux, he has a genuine chance of winning the Cheltenham Gold Cup for the fifth time. Yet by his own admission, life has not been easy over the past decade.

On a professional level, sourcing prospective top-class runners has become much more difficult. At home, the resurgence of Nicky Henderson, in tandem with the huge investment of owners Simon Munir and Isaac Souede, means that youngsters that once would have found their way from France to Somerset are now bound for Seven Barrows in Lambourn instead.

In Ireland, the rise of Gordon Elliott, firepower of Willie Mullins and dominance of Gigginstown House Stud and JP McManus, not to mention Rich Ricci, provides significant competition when it comes to both buying the best bloodstock and winning the top races.

Nicholls knows he was lucky to hold as many aces as he did when Kauto et al were strutting their stuff. Trying to unearth such gems has become much harder in the current landscape.

“[Once] you could wait until the horses had five or six runs in France before you bought them,” Nicholls tells Julian Muscat. “Yes, they were expensive, but it wasn’t a gamble because you knew they were good.

“Now you’re forced into buying a horse that finished second in a maiden hurdle at Auteuil for £300,000, because if you don’t you’ll be left behind. You might then find that the form of that race was worthless.

“I have some owners who will pay plenty of money but you have to find value too. So you have to find another way. We have gone back to basics a little bit over the last few years, buying stores for between £60,000 and £100,000. You absolutely have to give these horses time.

“We bought one at auction recently for £190,000 that had finished second in a maiden point. He’s a beautiful horse, and I’m happy with him, but that’s the market for you.”

Nicholls also opens up about his private struggles, including the end of a relationship at a time when he had lost his established stable stars.

“To be honest, I felt like chucking it all in,” Nicholls says. “I was struggling with the pressure, the divorce, all sorts of things as well as keeping the business going. So I bottled it up. I felt I had to bury it to keep moving forward.”

Now in a much better place and enjoying life again, the trainer heads to the Festival with his strongest team for years, aided by outstanding young jockeys Harry Cobden and Bryony Frost. We wish him all the very best.

Sadly, March is Emma Berry’s final issue as bloodstock editor. Emma has fulfilled that role with distinction over the past decade, having been a valued contributor since the magazine launched in September 2004.

Emma’s outstanding knowledge and passion for her subject will be obvious to all those who have read and enjoyed her articles over the years. Emma will be missed by the TOB team and we wish her every success in the future. 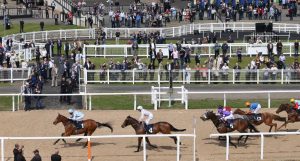 Up Next
Arc risks alienating owners with purses cut